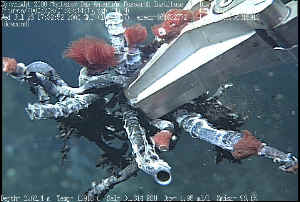 Robert Vrijenhoek, an evolutionary geneticist at MBARI, has spent his career studying how an organism’s genes can shape its interactions with its surroundings, the evolution of its species as a whole, and—if the animal is endangered—its conservation. Thirteen years ago, he turned his attention to the exotic organisms that populate hydrothermal vents and cold seeps.

When the first hydrothermal vent was discovered in 1977, it presented scientists with the opportunity to study a type of ecosystem unlike any they had seen before. Vents, and their lesser-known cousins, cold seeps, are found where chemically enriched seawater that has circulated beneath the oceanic crust escapes back into the water column through cracks in the seafloor. Bacteria that live near vents or seeps use chemical compounds from the enriched seawater to produce food, much in the same way that plants use the sun’s energy during photosynthesis. These bacteria—like plants in most other ecosystems— form the base of the food web in vents and seeps. Although scientists knew of similar bacteria living in hot springs, they had never seen an entire ecosystem based on them. “Finding the vents really opened people’s eyes that whole communities could be supported by chemosynthetic bacteria,” says Vrijenhoek.

Vrijenhoek’s lab has used genetic tools to paint an outline of how the animals that inhabit vents and seeps are distributed throughout the world’s oceans, how they evolved, and how they are related to each other. This science, known as biogeography, has benefited from modern genetics. By comparing DNA sequences from two related species, scientists can determine how closely related they are: the closer the relationship, the more similar the DNA. Given a rough estimate of how quickly the DNA of the animals change, they can also approximate how long ago they began to branch out into different species. 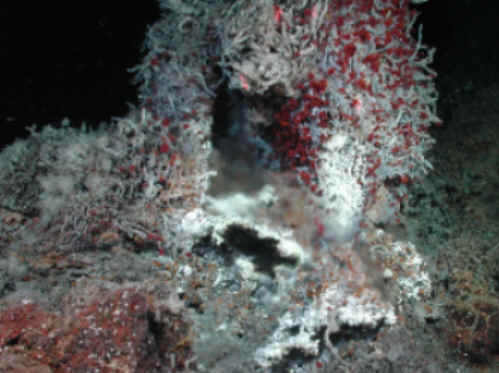 Hydrothermal vents and seeps are particularly important to those interested in marine biogeography. Since most vent and seep fauna can’t survive in any other type of environment, vent and seep fields function essentially as islands of habitat in a sea of uninhabitable ocean basin. And islands, says Vrijenhoek, are a good way to study how animals find their way through unsuitable habitat to find a new home, and how they evolve when separated from their parent populations.

In a paper published last February in Science, Vrijenhoek and several colleagues summarized what is now known about the biogeography of vent and seep organisms. These animals arose relatively recently, probably within the last 100 million years, and came from many different sources—both shallow water and deep-dwelling creatures have given rise to vent or seep animals. Vent species have evolved from seep species, and vice versa. So far, scientists have recognized six biogeographical “provinces” of hydrothermal vents, each with their own particular fauna and physical characteristics, such as intensity of volcanic activity and chemical composition of their vent fluids. “People have observed biogeographical provinces on the surface for years,” Vrijenhoek said. “You wouldn’t expect the deep sea to behave in the same way as the surface, since it’s two degrees Celsius everywhere, but it seems to.”

But what has prevented vent animals from different provinces—many of which release larvae that can travel hundreds of kilometers before settling—from interbreeding? Vrijenhoek says that a variety of factors, which vary according to the species, have kept the provinces distinct. History may have played a role, as when falling seawater levels closed the Tethys Sea, separating the Atlantic and Indian Ocean, approximately 90 million years ago. The closure prevented the interbreeding of Atlantic and Indian Ocean animals, allowing them to slowly evolve farther and farther apart. How the species reproduces and develops can also play a part—an animal that releases long-ranging larvae can expand into new habitat more easily than an animal that broods its young. The topography of the seafloor may serve as a barrier, like a tall mountain separating two populations on land, or strong prevailing currents may sweep larvae along a set course, creating a fluid barrier to the flow of genes. The current encircling the Antarctic, for example, isolates some of its fauna, preventing the exchange of larvae with other ocean basins.

Scientists have only recently begun to realize that features such as currents or seafloor topography can control the ranges of marine animals. For many years the ocean was seen as a vast, continuous habitat, with little variation and few barriers to the movement of animals. Recent scientific studies have challenged this belief, and Vrijenhoek and several of his colleagues have added to the challenge with the discovery of a hybrid of two species of hydrothermal vent mussels that live on the Mid-Atlantic Ridge. The two species are closely related, and their ranges overlap in a region of short-lived vents that provide poor-quality habitat. This intermediate zone is sparsely populated by hybrids of the two species—the first hybrid animals found along the mid-ocean ridge system. The scientists published their findings last year in the journal Molecular Ecology.