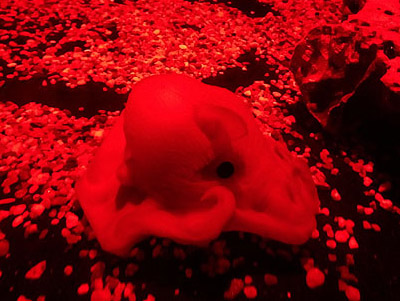 From the vampire squid to the flapjack octopus, deep-sea cephalopods come in an amazing variety of shapes and sizes. Yet few humans have seen these animals alive. Since April, members of the public have been able to see these animals for the first time, as part of the ongoing Tentacles special exhibition at the Monterey Bay Aquarium. A collaborative effort with the aquarium’s partner institution, the Monterey Bay Aquarium Research Institute (MBARI), this exhibit has thrilled both aquarium visitors and MBARI scientists, and is providing new scientific insights into the lives of these mysterious animals.

Almost two years in the making, Tentacles required close teamwork between husbandry experts at the aquarium and researchers at MBARI.

“It’s been a great collaboration,” said Bret Grasse, an aquarist working on the exhibit. “MBARI has some of the best deep-sea biologists in the world, and they’ve been working with these animals for years. They’re great at finding and collecting deep-sea animals. Here at the aquarium, we’re really good at keeping these animals alive and figuring out how to share them with the public.”
—Aquarist Bret Grasse

The first challenge the team faced was simply finding animals to place on exhibit.

“Few, if any, aquariums in the world have the kind of access to remotely operated vehicles (ROVs) that we get from working with MBARI,” Grasse said. “But even with these amazing robots, we still have to find the animals.”

Key to this step was Stephanie Bush, a postdoctoral fellow at MBARI and an expert on deep-sea cephalopods. Bush combed through MBARI’s database of thousands of ROV dives dating back to 1989, looking for locations in Monterey Canyon where deep-sea octopuses and squid were most likely to be found. Even after all this research, finding animals in the vastness of the open ocean was a big challenge. As Bush points out, “Many of these creatures are not rare in the deep sea. They’re just rarely collected.”

The next challenge was keeping the deep-sea animals alive once they reached the surface. The deep sea is almost pitch black, with crushing pressure, near-freezing water, little oxygen, and sparse food. These conditions seem daunting to us, but they are ideal for deep-sea animals that have had millions of years to adapt to these harsh conditions. For such animals, it is our bright, busy world that is a dangerous, alien environment.

Once again MBARI’s research helped address this challenge. As Grasse explained, “We do the best we can to replicate an animal’s natural environment. In this case, we used data on deep-sea oxygen concentrations, water temperature, and salinity collected by MBARI’s ROVs to help us figure out what conditions the animals might need.” Similarly, video from ROV dives helped the aquarists understand how the animals typically behaved—for example, how much time they spent resting or swimming.

When it came to deciding what to feed the animals, the team looked at scientific studies examining the gut contents of dissected animals. In the case of the vampire squid, MBARI researchers only recently discovered that they use a sticky string-like filament to collect tiny particles of “marine snow” that sink down from the surface. Since the aquarists did not have a reliable supply of marine snow, they filled a blender with chilled seawater, fish eggs, krill, and bits of moon jelly, creating a glutinous slurry that they presented to the vampire squid using a turkey baster.

“Cephalopods are particularly sensitive, not just to environmental conditions, but also to diet,” Grasse said. “With many of these animals, we’re learning as we go. And we’re definitely getting better over time.”

“Aquarists at the Monterey Bay Aquarium don’t shy away from challenges,” he added. “It’s part of the job.”

But keeping the animals alive was only half the battle. Aquarists also had to figure out how to successfully present them to the public. Inevitably, the animals are exposed to ambient light (even though the exhibit is in a dimmed room) and occasional camera flashes (even though there are signs prohibiting this), as well as noise and vibrations from people passing by.

In some cases, this means that deep-sea cephalopods can only be exhibited for a few days at a time, before being returned to a nice dark, quiet holding tank in a back room. As Grasse put it, “We’re always balancing the public’s desire to see these animals with what we think is best for the animals themselves.”

In addition to giving aquarium visitors a new appreciation for deep-sea animals, this collaboration has allowed MBARI researchers to make new discoveries about the animals. For example, after examining over a dozen flapjack octopuses collected in Monterey Bay, Bush believes that they may represent a species that has yet to be described by science. She has also learned a lot from working with the animals at the aquarium.

“When you have an animal in a tank, you can see little details in the shapes and behavior that you might not notice in video,” Bush said. “For example, of the 14 flapjack octopuses we’ve collected, every single one was a mature female. We have no idea why this is—or where the males are.”

Bush is especially excited because one of the female octopuses laid eggs in its tank. “Before this, no one even knew what the eggs of this octopus looked like,” she said. “Now we know that they lay these little tiny eggs on rocks, and then cover them with sand.” Bush hopes that the eggs will hatch, but neither she nor anyone else knows how long this might take.

Despite all the challenges, both Bush and Grasse are excited to share these animals with the public. As Grasse put it, “I think it’s great that we’re inspiring so many people to care about the deep sea. It’s an area that we rarely see, but which is the largest habitat on Earth.”

Bush concurs. “It’s been great to work with the aquarium on this project,” she said. “It’s only because of the Tentacles exhibit that we’ve been able to take such a close look at these animals. It’s a once-in-a-lifetime opportunity.” “And an important one,” she added.

“We’re affecting the ocean faster than we’re learning about it,” Bush said. “So we need to take advantage of any opportunity we get to study these animals and their environment.”

Video about Stephanie Bush and the Tentacles exhibit:

For additional information or images relating to this news release, please contact pressroom@mbari.org.