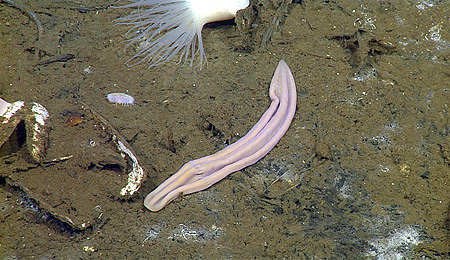 Xenoturbella profunda worm in the Gulf of California.

The deep sea is full of strange and little-known worms. A new paper coauthored by MBARI molecular biologist Robert Vrijenhoek describes four newly named species of worms in the genus Xenoturbella that have mouths, but no eyes, brains, stomachs, or anuses. A detailed analysis of the new species’ DNA showed that they are some of the most primitive animals with bilateral symmetry (bodies with more or less symmetrical right and left sides).

The first (and only previously known) species of Xenoturbella was found in the waters off Sweden in 1950. This animal was so strange looking that biologists couldn’t even decide what phylum it belonged to. Early DNA studies suggested that it was a primitive mollusc. However, a reanalysis of the data showed that this result was probably due to DNA from clams that the animal ate. The researchers who performed the reanalysis suggested that the creatures might be part of a group of animals that includes acorn worms and sea stars. This finding implied that Xenoturbella’s body plan had become simpler over time, since it lacks many body features seen in animals within these groups.

The recent study, based on an analysis of 1,200 different genes and published in the February 4, 2015 issue of Nature, confidently placed Xenoturbella and another group of flatworm-like animals called acoelomorphs as the closest relatives to all other Bilateria—animals with bilateral symmetry. This means that, rather than evolving into a simpler body plan, these animals never evolved brains or other organs. Thus, as Vrijenhoek put it, “These unusual worms provide a glimpse into one of the earliest body plans in animal evolution.”

The lead author on the recent paper was Greg Rouse, of the Scripps Institution of Oceanography. Coauthors included Vrijenhoek, Jose Carvajal of Scripps, and Nerida Wilson of the Western Australian Museum.

Rouse used MBARI’s remotely operated vehicles (ROVs) to observe and collect the four newly named species of Xenoturbella during dives in Monterey Bay and the Gulf of California. All of the worms were found near deep-sea cold seeps and hydrothermal vents, and are believed to feed on clams and other molluscs that live around these sites.

The deepest of the new species of worms, Xenoturbella profunda, was discovered at a hydrothermal vent in the Guaymas Basin, 3,700 meters (12,139 feet) below the surface of the Gulf of California. A second type of xenoturbellid worm was found in the Gulf at a cold seep about 1,700 meters (5,577 feet) deep. The researchers named this animal Xenoturbella churro because it reminded them of a type of Mexican pastry.

The researchers found two other species of Xenoturbella in the depths of Monterey Canyon. The larger of these two is about 20 centimeters (8 inches) long. Like all the new species identified in the paper, it is purplish gray. According to Vrijenhoek, “When Greg [Rouse] first spotted these worms gliding through a clam field in Monterey Bay, we jokingly called them purple socks.” Eventually the researchers decided to name this animal Xenoturbella monstrosa.

Because they slither near the bottom of the animal tree of life, the newly named worms may have broader impacts in the field of evolutionary biology. For example, even though the worms lack internal organs such as guts or brains, they may help researchers understand how these features evolved over time. Not a bad fate for a creature that resembles a lost sock!

Video about Xenoturbella worms by the Scripps Institution of Oceanography: