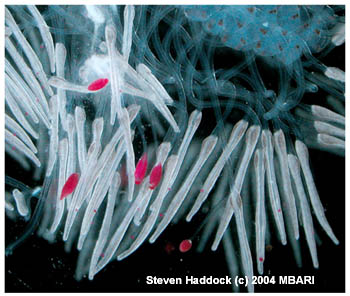 MOSS LANDING—As successful fishermen know, if you want to catch fish, you have to use the right bait or lure. This is true even in the deep sea, where scientists recently discovered a new species of jelly that attracts fish by wiggling hundreds of glowing red lures. This is the first time any marine invertebrate has been found to use a bioluminescent lure or to display red bioluminescence. This discovery is described in an article written by Steven Haddock of the Monterey Bay Aquarium Research Institute (MBARI), along with several coauthors, in the July 8, 2005 issue of Science magazine.

It has been estimated that about 90 percent of deep-sea animals are bioluminescent. Yet in many cases, scientists do not know how these animals benefit from the energy-intensive process of producing their own light. Some jellies use bioluminescence as a defense—they glow when disturbed in order to light up their predators, making their attackers vulnerable to even larger animals. A few deep-sea fishes and squids have glowing organs that look like lures, but even these animals have never been observed actually using their glowing organs to capture prey.

MBARI marine biologist Steven Haddock has studied glowing marine animals for over a decade, focusing on gelatinous animals such the siphonophores described in his recent article. Related to the typical round “jellyfish” that sometimes wash up on beaches, siphonophores are colonial animals, arranged in chains that in some species can be dozens of meters long. The members of a colony specialize at different tasks. Some form swimming bells, which pulse slowly, pulling the colony through the water like a long, fluid freight train. Others specialize in feeding, and sport stinging tentacles.

Almost all siphonophores are bioluminescent, but scientists know little about why and how they glow. Siphonophore colonies are notoriously difficult to study—they often break into pieces when disturbed or captured. For this reason, Haddock spent hundreds of hours using MBARI’s remotely operated vehicles (ROVs) to observe siphonophores in their native habitat, thousands of meters below the sea surface.

The siphonophore featured in Haddock’s article (which is an unnamed species in the genus Erenna) lives at depths of 1,600 to 2,300 meters, where fish are few and far between. For this reason, Haddock was surprised to observe small fish in their guts. He found himself wondering how these jellies could capture enough fish to survive in their sparsely inhabited environment. Examining the siphonophores under the microscope, he discovered that interspersed among their stinging tentacles were thin rod-like structures. These “tentilla” were tipped with red, glowing blobs.

Several lines of evidence eventually led Haddock and his coauthors to the conclusion that these red blobs served as lures for small deep sea fish. Their first clue lay in the siphonophore’s behavior. Jellies that use bioluminescence for self defense tend to have lights distributed all around their body, which flash brightly when disturbed (the “burglar alarm effect”). In contrast, the Erenna siphonophores kept their bioluminescence very localized and under tight control, suggesting that their lights had an entirely different function.

Continuing his microscope work, Haddock found more specific clues—the red, glowing blobs were shaped remarkably like the bodies of deep-sea copepods, a major food item for small deep-sea fish. Furthermore, the tentilla flicked back and forth repeatedly so that the glowing lures darted through the water just like swimming copepods. Finally, at least one siphonophore’s digestive system contained both fish and lures, suggesting that the lures were ingested along with the fish.

Haddock sees these glowing lures as Erenna’s way of adapting to a difficult environment. As he put it, “Most siphonophores set a big web of tentacles to catch animals that happen to swim by. But this jelly doesn’t deploy its tentacles very far. In an environment where fish are rare, it uses deception to attract fish instead of casting a wide net to capture them.”

After discovering lures on this new species of siphonophore, Haddock and his coauthors looked at several related species and noticed similar glowing structures. He believes that these structures also serve as lures, but were overlooked or misinterpreted by previous researchers. He explains, “This discovery was a big paradigm shift for us—most jellies were thought to use bioluminescence for defense, but once we saw this, it made us realize that the same thing was happening in other species.”

Erenna’s glowing red lures may also force scientists to take a new look at the role of red light in the deep sea. Red bioluminescence is extremely rare, and the prevailing view among marine biologists has been that most deep-sea animals cannot detect red light at all. However, because deep-sea fishes are so hard to bring to the surface intact, we know very little about their physiology. Haddock’s work suggests that some deep-sea fishes may not only see red light, but routinely use it in finding food.