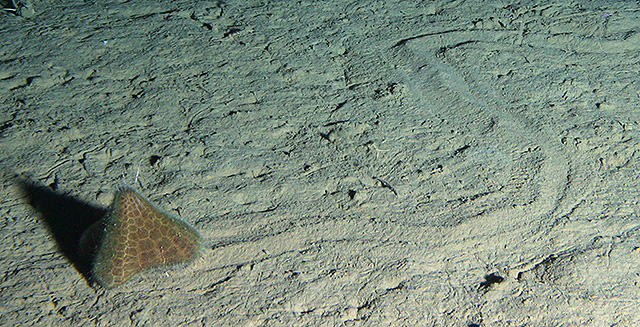 The vast muddy expanses of the abyssal plains occupy about 60 percent of the Earth’s surface and are important in global carbon cycling. Based on long-term studies of two such areas, a new paper in the Proceedings of the National Academy of Sciences (PNAS) shows that animal communities on the abyssal seafloor are affected in a variety of ways by climate change.

Historically, many people, including marine scientists, have considered the abyssal plains, more than 2,000 meters below the sea surface, to be relatively isolated and stable ecosystems. However, according to Ken Smith, a marine ecologist at the Monterey Bay Aquarium Research Institute (MBARI) and lead author of the recent PNAS article, changes in the Earth’s climate can cause unexpectedly large changes in deep-sea ecosystems. Based on 18 years of studies, Smith and his coauthors show that such ecosystem changes occur over short time scales of weeks to months, as well as over longer periods of years to decades.

The recent paper covers two time-series studies—one at “Station M,” about 220 kilometers off the Central California coast, and a second on the Porcupine Abyssal Plain, several hundred kilometers southwest of Ireland. The flat, muddy seafloor at these sites lies between 4,000 and 5,000 meters beneath the ocean surface.

In this cold, dark environment, very little food is available. What food there is takes the form of bits of organic debris drifting down from the sunlit surface waters, thousands of meters above. During its long descent, this organic matter may be eaten, excreted, and decomposed, drastically reducing its nutritive value. It is estimated that less than five percent of the organic matter produced at the surface reaches the abyssal plains.

Research by Smith and his coauthors has shown that the amount of food reaching the deep sea varies dramatically over time. For example, at the Porcupine Abyssal Plain, the amount of organic material sinking from above can vary by almost an order of magnitude from one year to another.

Such variations in food supply have several causes. On a seasonal basis, algal blooms near the sea surface send pulses of organic material to the deep seafloor. Other factors may also come into play, including how much of the algae is eaten by marine animals, and how the material is moved by ocean currents.

The authors point out that global climate change could affect the food supply to the deep sea in many ways. Some relevant ocean processes that may be affected by climate change include wind-driven upwelling, the depth of mixing of the surface waters, and the delivery of nutrients to surface waters via dust storms. Climate-driven changes in these processes are likely to lead to altered year-to-year variation in the amount of organic material reaching the seafloor.

As one example of ongoing changes in deep-sea ecosystems, the authors point to the fact that one of the most important groups of fish on the deep seafloor, the grenadiers, doubled in abundance between 1989 and 2004 at Station M. They speculate that change may be linked to a combination of climate change and commercial fishing.

In another example, some previously common species of sea cucumbers at Station M virtually disappeared after 1998, while others became much more abundant. These changes were tied to a significant El Niño event in 1997-98. Similar dramatic year-to-year changes were observed at Porcupine Abyssal Plain, where they were linked to changes in both the quantity and type of food reaching the seafloor.

Based on their observations, the authors conclude that long-term climate change is likely to influence both deep-sea communities and the chemistry of their environment. According to Smith, “Essentially, deep-sea communities are coupled to surface production. Global change could alter the functioning of these ecosystems and the way carbon is cycled in the ocean.”

Changes in deep-sea carbon cycling are not considered in most climate models, an oversight that the authors believe should be corrected. In order to obtain the information needed to include seafloor-community changes in global climate models, the authors suggest that long-term, automated systems must be developed for monitoring the deep sea.

Smith and his colleagues point out that deep-sea ecosystems are prime targets for monitoring using cabled ocean observatories, new seafloor moorings, and robots, which can provide continuous data to capture both long-term and short-term changes in seafloor conditions. As coauthor Henry Ruhl put it, “What we need is to move beyond fragmented research programs and transition to a comprehensive global effort to monitor deep-sea ecosystems.”

The research at Station M was sponsored by grants from the National Science Foundation and the David and Lucile Packard Foundation. Research at the Porcupine Abyssal Plain Sustained Observatory site was supported by the European Union and the Natural Environment Research Council of the United Kingdom.