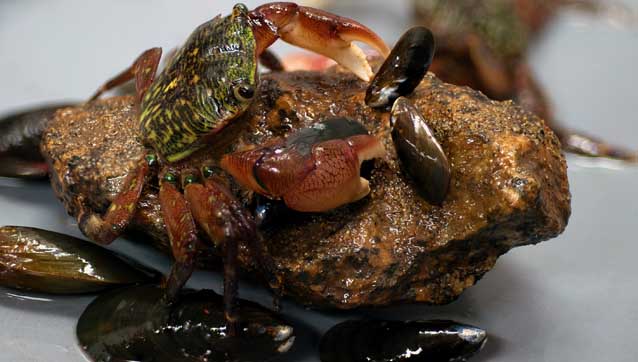 Ocean acidification may cause shifting predator–prey relationships between species like lined shore crabs and mussels.

Warmer water temperatures and an increasingly acidic ocean have been shown to affect many species, but just how entire communities might be impacted is much more complicated. As one species eats less or dies sooner, its predators, prey, or competitors are also affected, shifting food web dynamics at the community scale. This was evident in a 10-week experiment on several animals found in the rocky intertidal areas of the Central California coast. Results of the experiment, conducted by MBARI researchers Josh Lord, Jim Barry, and Dale Graves, were published this week in Marine Ecology Progress Series.

Crabs, abalone, mussels, predatory snails, and seaweed were placed in special tanks that controlled temperature and levels of carbon dioxide to approximate future ocean conditions. The researchers observed changes in the performance of individual animals, such as reduced feeding or growth rates, but were also able to test how shifts in one species’ survival or behavior could have consequences for other species as well. For instance, the very presence of crabs caused the snails to eat fewer mussels, presumably to avoid risk of predation by the crabs. However, if the crab population decreases due to acidification, would snails increase their feeding rates, leading to more consumption of mussels? These species interactions proved to be more unpredictable in the complex intertidal community than has been evident from studies of individual species.

The researchers concluded that for strongly linked species (e.g., predator-prey or competitors), the indirect effects of climate change may be powerful in shaping future marine communities.