Camera system for surveying fish populations gets an upgrade 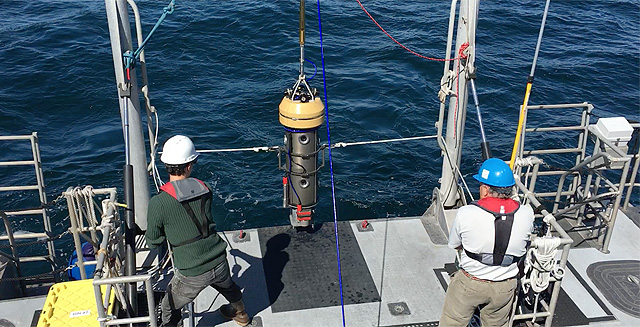 Engineers at MBARI have made improvements to the Benthic Observation Survey System (BOSS)—a camera system designed to better characterize groundfish populations on deep, rocky reefs. The system is lowered from a ship to the seafloor, where it can survey fish populations in sometimes difficult terrain.

A prototype of the BOSS was designed and tested in Monterey Bay over the past year, but this model was equipped with only two high-definition video cameras. A newer version of the BOSS has eight stereo cameras, mounted in a vertical configuration, giving a nearly 360-degree view of the surrounding benthic landscape. A ninth camera is used for observing the seafloor prior to setting down. This ninth camera is critical for the winch operator to determine if the area below is a good spot to land.

Scientists want to focus on rocky habitats, where rockfishes live, to more accurately assess fish populations. However, these places are difficult to access with other fishery monitoring techniques, so these areas have been  traditionally under sampled.

The BOSS is lowered to a site of interest on the seafloor using the downward looking camera and a light source. Once on the seafloor, the light is turned off and the BOSS sits in complete darkness for approximately 60 seconds. The four main lights are then turned on and video is recorded for two to three minutes. Video from the cameras is streamed to the ship through an optical fiber for communication (necessary for the nine channels of high-definition video) and recorded onboard.

Once the video recording is done, the BOSS is lifted directly by a tether and winch to approximately 20 meters off the seafloor and towed to another site, and then the process is repeated. The custom system allows for a fast launch and recovery operation and, therefore, the scientists are able to sample two to three areas per day (up to 20 sites can be sampled per deployment).

Because of the simple design and launch/recovery system, the BOSS can easily be deployed on a variety of ships. It has been tested on the R/V John Marin, R/V Shearwater, and R/V Fulmar.