Bristle worms get their turn 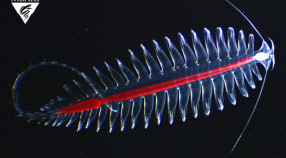 An amazing variety of bristle worms thrive in the ocean, both on the seafloor and up in the water column. Biologists call these worms polychaetes (pronounced “polly-keets”), which means “many small hairs” in Latin. Polychaete worms have segmented bodies, with each segment sporting many little bristles (chaetae). The bristles serve different purposes in different worms, from crawling to swimming to defense.

Scientists have named over 8,000 species of polychaete worms, but they have hardly scratched the surface, especially when it comes to worms in the deep sea. Over the past decade some of the most amazing animals named by MBARI researchers have been polychaete worms.

Worm expert Karen Osborn was a graduate student at MBARI and is now a curator at the Smithsonian’s National Museum of Natural History. She and other worm experts recently decided to designate July 1st as International Polychaete Day in honor of Kristian Fauchald, a distinguished polychaete taxonomist who passed away on April 5, 2015. Having spent over 50 years working in the field, Fauchald had a huge impact on several generations of researchers. As an indicator of the respect he elicited from his fellow scientists, Fauchald has had almost 40 species of worms named after him.

Osborn said that she always admired Fauchald’s “enthusiasm for polychaetes, for people, and for living life to the fullest. For this reason, Osborn said, “We decided to launch International Polychaete Day to share with the world these amazing animals, which Kristian found so fascinating”.

Polychaetes have evolved into a multitude of sizes and shapes, from small, round “gumball worms” to two-meter-long, centipede-like pile worms. They can be completely transparent or white, blue, green, red, yellow, orange, purple, and every color in between. They occur in every marine habitat, from shallow tide pools to volcanic hydrothermal-vent chimneys. Many of them glow. They are fabulous recyclers and builders, creating massive reef structures and tangles of tubes that house a myriad of other animals including crabs, snails, and (of course!) other worms. They are not only beautiful but also essential to the health of the world ocean.

Here are some examples of the bizarre and wonderful polychaetes that MBARI researchers have seen in the ocean depths. For more information and images, see the International Polychaete Day posts on Twitter and in a blog by the National Museum of Natural History.

This new MBARI video highlights polychaete worms that drift and swim in the midwater, deep below the ocean surface.

This YouTube video shows polychaete worms and other animals that eat the bones of dead animals on the deep seafloor.