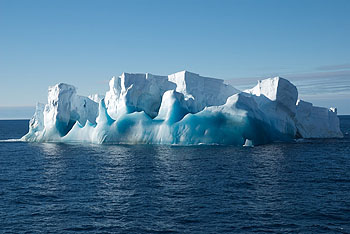 A small iceberg with old blue ice that was chosen for an ROV dive.

The first comprehensive study of the biological effects of Antarctic icebergs shows that they fertilize the Southern Ocean, enhancing the growth of algae that take up carbon dioxide from the atmosphere and then, through marine food chains, transfer carbon into the deep sea. This process is detailed in 19 new research papers published electronically in a special issue of the journal Deep Sea Research Part II: Topical Studies in Oceanography.

The research team was led by MBARI marine biologist Ken Smith and funded by the National Science Foundation. Smith, along with researchers from more than a dozen other institutions, conducted three month-long cruises to the Weddell Sea in 2005, 2008, and 2009. By tracking individual icebergs and deploying remotely controlled aircraft and submersibles, as well as robotic drifters, the team was able to document a process that had previously been suspected, but never proven.

Global climate change is causing Antarctic ice shelves to shrink and split apart, releasing thousands of free-drifting icebergs that are carried by currents into the nearby Weddell Sea. The new research suggests that these icebergs carry iron-rich sediment from the land out into the ocean. As these icebergs melt and drift across the ocean, some of the iron dissolves in the seawater, creating a trail of iron-rich meltwater that can be up to 19 kilometers (12 miles) long. The iron in this water helps fertilize the growth of microscopic algae.

During their three cruises, the team studied an area they called “iceberg alley” in the inhospitable and sometimes dangerous Southern Ocean. Instead of avoiding icebergs, they directed their research vessel to approach and follow drifting icebergs the size of small towns. To follow individual icebergs, they used satellites and GPS tracking devices that were dropped on the icebergs using a radio-controlled airplane. They also used three different robotic submersibles to study life on the undersides of the icebergs.

MBARI engineers, led by Alana Sherman, developed a new robotic instrument that was programmed to sink 600 meters (about 2,000 feet) below the ocean surface while a large iceberg drifted overhead, then rise back to the sea surface after the iceberg had passed. This instrument, called a “Lagrangian sediment trap,” was used to collect particles of sediment, bits of dead algae, and other debris that drifted down from the waters under and around the iceberg. This device allowed scientists to measure, for the first time, the amount of organic carbon sinking into the deep sea beneath a large (6-kilometers wide, 35-kilometers long, and 28-meters tall), free-floating iceberg.

Extrapolating their findings to the rest of the Weddell Sea, the researchers concluded that the icebergs (both large and small) were playing an important role in controlling how much carbon from the atmosphere was taken up by algae and ultimately transported into the deep sea. “The role of icebergs in removing carbon from the atmosphere may have implications for global climate models that need to be further studied,” said Smith.

In addition to the direct measurements of material sinking beneath the icebergs, the multidisciplinary research team performed a wide variety of physical, chemical, and biological studies around the icebergs. Many of these studies are detailed in the special issue of Deep-Sea Research. The 19 papers in this special issue describe:

After overcoming many challenges to study a few icebergs, Smith and Sherman are working on strategies and automated tools for measuring the effects of the many icebergs in “iceberg alley” over periods of months to years. This would provide a much better estimate of how icebergs are affecting the chemistry and biology of the Southern Ocean.

Ken Smith and researchers from over a dozen institutions spent three month-long cruises in a part of the Weddell Sea that they dubbed “iceberg alley.”

Icebergs such as this one carry iron-rich sediment from Antarctica out into the Southern Ocean. The darker parts of the ice contain higher concentrations of sediment.

During the research team’s 2009 cruise, the low Arctic sun cast the shadow of the research vessel Nathanial Palmer on the side of this large tabular iceberg.

Instead of avoiding icebergs, the research vessel Nathanial Palmer approached very closely to these floating “islands” of ice during this five-year research project.

Researchers programmed this Lagrangian sediment trap (the gray tube with white funnels) to sink 600 meters below the surface as a large iceberg drifted overhead. After collecting sinking debris for about three days, the trap rose to the surface. At that point, researchers and crew members used a small boat to lift the trap carefully out of the water and then hoisted it onto their research vessel.

Researchers programmed this Lagrangian sediment trap (the gray tube with white funnels) to sink 600 meters below the surface as a large iceberg drifted overhead. After collecting sinking debris for about three days, the trap rose to the surface. At that point, researchers and crew members used a small boat to lift the trap carefully out of the water and then hoisted it onto their research vessel.

Ken Smith (left), Alana Sherman (right), and other members of the research team examine a Lagrangian sediment trap after it was brought back on board the research vessel.

Researchers launch a small remotely operated vehicle (ROV) that was customized to collect video and water samples underneath Antarctic icebergs.

Researchers launched this remotely controlled plane from the deck of the research vessel Nathanial Palmer to collect video of icebergs and drop GPS tracking devices on top of icebergs.