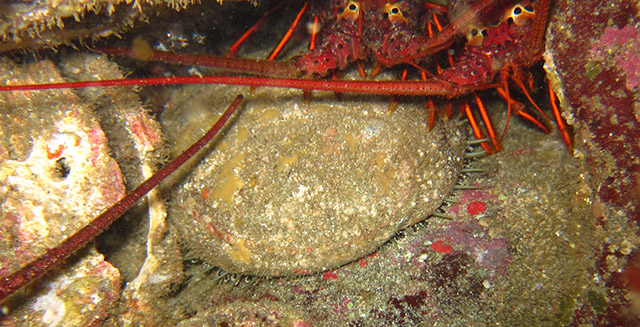 A new paper in The American Naturalist discusses the significant role marine protected areas can play in preventing the extinction of commercially harvested species like abalone. MBARI Postdoctoral Fellow Charles A. Boch participated in the study, which examined abalone population models and how protected areas can ensure animals survive catastrophic events that could otherwise wipe out a population.

Many marine species such as abalone, sea urchins, and sea stars are relatively immobile—they lack the ability to move quickly over large distances—which makes it difficult for them to evacuate rapidly when a catastrophic event occurs. These events range from powerful storms and widespread viruses to oil spills and overharvesting.

Combining several different computer models, the authors compared the effectiveness of fisheries management with and without marine protected areas (MPAs). The models focused on a commercially harvested species of green abalone in Baja California Sur, Mexico.

The green abalone fishery at Isla Natividad provided an ideal case study to observe the effects of management techniques like MPAs. Fishermen there have established cooperatives that strictly enforce no-take zones within their fishing grounds. The Isla Natividad fishery has demonstrated that protected areas sustain larger populations after catastrophic events and promote faster species recovery in other regions when larvae “spillover” into adjacent areas.

The Isla Natividad green abalone fishery provided the basis for the researchers’ population model. The results of the models were encouraging and suggest that MPA networks offer a feasible solution to fisheries scientists and managers. As the authors noted, “We found that MPA networks dramatically reduced the risk of [population] collapse following catastrophic events (75-90 percent mortality), while populations often continued to decline in the absence of spatial protection.”