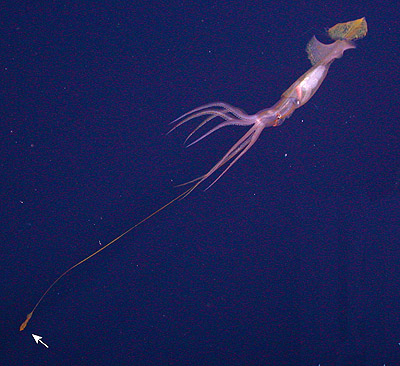 Many deep-sea animals such as anglerfish use parts of their body as lures to attract prey. Some deep-sea squids may use this strategy as well. In a recent paper, researchers associated with the Monterey Bay Aquarium Research Institute (MBARI) describe a deep-sea squid that appears to use a different method to lure prey—its tentacle tips flap and flutter as if swimming on their own. The researchers hypothesize that the motion of these tentacle tips may induce small shrimp and other animals to approach within reach of the squid’s arms.

Most squids have eight arms and two longer “feeding” tentacles. The tips of the tentacles, which are often broader and armed with suckers or hooks, are known as “clubs.” Such squids hunt by rapidly extending their tentacles and then grabbing prey with their clubs. The squids also use the tentacles to carry captured prey to their mouths.

The deep-sea squid Grimalditeuthis bonplandi seems to use a very different feeding strategy. A slow swimmer with a weak, gelatinous body, its tentacles are long, thin, fragile, and too weak to capture prey. Unlike any other known squid, its tentacles do not have any suckers, hooks, or photophores (glowing spots).

Until just a few years ago, the marine biologists had only seen specimens of G. bonplandi that were dead or dying after having been captured in deep-sea trawl nets. However, using video from underwater robots known as remotely operated vehicles (ROVs), the authors of the recent paper were able to study how these squids behave in their native habitat, 1,000 to 2,000 meters (roughly one mile) below the ocean surface.

The lead author of the paper, Henk-Jan Hoving, was a postdoctoral fellow at MBARI from August 2010 until July 2013. He and his coauthors examined video of G. bonplandi taken during an MBARI ROV dive in Monterey Bay. They also analyzed video collected by several oil-industry ROVs in the Gulf of Mexico, as part of the Scientific and Environmental ROV Partnership Using Existing Industrial Technology (SERPENT) project. In addition, the researchers dissected over two dozen preserved squids from various collections.

When the ROVs first approached, most of the squids were hanging motionless in the water with their eight arms spread wide and their two long, thin tentacles dangling below. What intrigued the researchers was that the squids’ tentacles did not move on their own, but were propelled by fluttering and flapping motions of thin, fin-like membranes on the clubs. The clubs appeared to swim on their own, with the tentacles trailing behind.

Instead of using its muscles to extend its tentacles, like most squids, G. bonplandi sends its clubs swimming away from its body, dragging the tentacles behind them. After the tentacles are extended, the clubs continue to wiggle independently of the tentacles.

When threatened, instead of retracting its tentacles as most squids would do, G. bonplandi swims down toward its clubs. After swimming alongside its clubs, the squid coils both the tentacles and clubs and hides them within its arms before swimming away.

In short, all of the motions and activities of these squids appear to be directed toward giving the impression that their clubs are small, swimming animals, independent from the rest of the squids’ bodies.

Because G. bonplandi‘s clubs do not glow, they would be invisible in the inky darkness of the deep sea. However, the researchers proposed several other ways that these “swimming” clubs might attract prey.

One possibility is that the moving clubs could disturb glowing microscopic organisms in the surrounding water, causing the water to glow like a ship’s wake during a red-tide bloom. The clubs’ swimming motions would also create turbulence or vibrations in the water, which could be detected by their prey. Such vibrations might mimic the vibrations used by prey animals to attract mates. Alternatively, they might be similar to the vibrations created by the even smaller animals eaten by G. bonplandi‘s prey.

Because Hoving and his coauthors have never actually seen this squid capture prey, they still do not know how exactly G. bonplandi feeds on any animals that it attracts using its “swimming” tentacle tips. But their detailed observations provide yet another example of the improbable survival strategies that have evolved in the often food-limited environment of the deep sea.

MBARI YouTube video showing the unusual movement of the tentacles and clubs of Grimalditeuthis bonplandi: