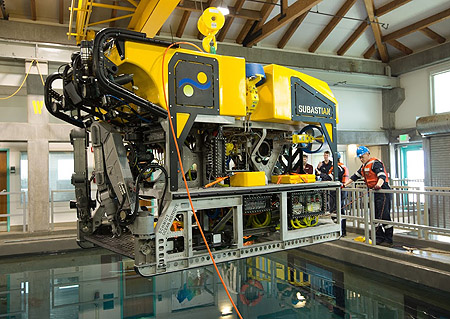 Over the past week, a team of engineers from the Schmidt Ocean Institute (SOI) have been testing a new remotely operated vehicle (ROV) SuBastian, in MBARI’s test tank. This is the first time the vehicle has been immersed in salt water, and the first time all of its power systems have been tested. So far the vehicle has been working great. After another week of testing at MBARI, the ROV will be shipped to Guam, where it will undergo ocean testing this summer aboard Schmidt Ocean Institute’s research vessel Falkor.

The new ROV will be able to dive to 4,500 meters, providing researchers from around the world with opportunities to explore and study the deep ocean. It carries a state-of-the art 4K Ultra High Definition video camera that can also capture 20-megapixel still images. When the ROV is performing scientific dives, video from the vehicle will be streamed live over the SOI website.

ROV SuBastian is named after Bastian, the protagonist of the fantasy novel “The Neverending Story.” The research vessel Falkor is named for the luckdragon, Falkor, from the same story. MBARI researchers, who advised the Schmidt engineering team during the design of the ROV, are happy to be part of SuBastian’s story.