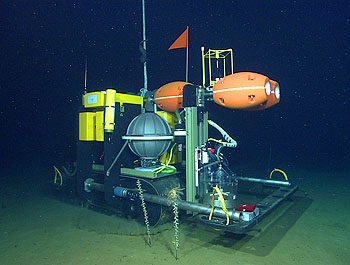 The Benthic Rover makes its way across the deep seafloor during a trial run in 2007. The “brains” of the vehicle are protected by a spherical titanium pressure housing. The orange and yellow objects are made of incompressible foam, whose buoyancy makes the Rover light enough underwater so that it won’t sink into the soft deep-sea mud. Image: © 2007 MBARI

Like the robotic rovers Spirit and Opportunity, which wheeled tirelessly across the dusty surface of Mars, a new robot spent most of July traveling across the muddy ocean bottom, about 40 kilometers (25 miles) off the California coast. This robot, the Benthic Rover, has been providing scientists with an entirely new view of life on the deep seafloor. It will also give scientists a way to document the effects of climate change on the deep sea. The Rover is the result of four years of hard work by a team of engineers and scientists led by MBARI project engineer Alana Sherman and marine biologist Ken Smith. 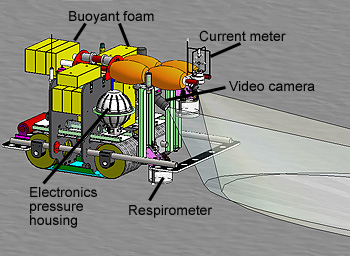 This computer drawing shows some of the key components of the Benthic Rover. Image: © 2008 MBARI

About the size and weight of a small compact car, the Benthic Rover moves very slowly across the seafloor, taking photographs of the animals and sediment in its path. Every three to five meters (10 to 16 feet) the Rover stops and makes a series of measurements on the community of organisms living in the seafloor sediment. These measurements will help scientists understand one of the ongoing mysteries of the ocean—how animals on the deep seafloor find enough food to survive.

Most life in the deep sea feeds on particles of organic debris, known as marine snow, which drift slowly down from the sunlit surface layers of the ocean. But even after decades of research, marine biologists have not been able to figure out how the small amount of nutrition in marine snow can support the large numbers of organisms that live on and in seafloor sediment.

The Benthic Rover carries two experimental chambers called “benthic respirometers” that are inserted a few centimeters into the seafloor to measure how much oxygen is being consumed by the community of organisms within the sediment. This, in turn, allows scientists to calculate how much food the organisms are consuming. At the same time, optical sensors on the Rover scan the seafloor to measure how much food has arrived recently from the surface waters.

MBARI researchers have been working on the Benthic Rover since 2005, overcoming many challenges along the way. The most obvious challenge was designing the Rover to survive at depths where the pressure of seawater is about 420 kilograms per square centimeter (6,000 pounds per square inch). To withstand this pressure, the engineers had to shield the Rover’s electronics and batteries inside custom-made titanium pressure spheres. 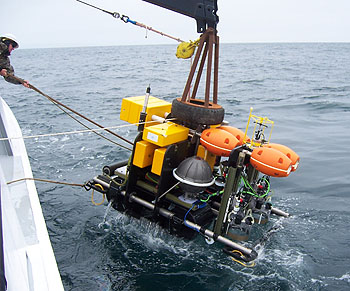 The crew of MBARI’s research vessel Point Lobos lower the Benthic Rover over the side of the ship and into the waters of Monterey Bay. Image: © 2009 MBARI

To keep the Rover from sinking into the soft seafloor mud, the engineers outfitted the vehicle with large yellow blocks of buoyant foam that will not collapse under extreme pressure. This foam gives the Rover, which weighs about 1,400 kilograms (3,000 pounds) in air, a weight of only about 45 kilograms (100 pounds) in seawater.

Other engineering challenges required less high-tech solutions. In constructing the Rover’s tractor-like treads, the design team used a decidedly low-tech material—commercial conveyor belts. After watching the Benthic Rover on the seafloor using MBARI’s remotely operated vehicles (ROVs), however, the researchers discovered that the belts were picking up mud and depositing it in front of the vehicle, where it was contaminating the scientific measurements. In response, the team came up with a low-tech but effective solution: they removed the heads from two push brooms and bolted them onto the vehicle so that the stiff bristles would clean off the treads as they rotated.

The team also discovered that whenever the Rover moved, it stirred up a cloud of sediment like the cloud of dust that follows the character “Pig-Pen” in the Charlie Brown comic strip. This mud could have affected the Rover’s measurements. To reduce this risk, the engineers programmed the Rover to move very, very slowly—about one meter (3 feet) a minute. The Rover is also programmed to sense the direction of the prevailing current, and only move in an up-current direction, so that any stirred-up mud will be carried away from the front of the vehicle.

In its basic configuration, the Benthic Rover is designed to operate on batteries, without any human input. However, during its month-long journey this summer, the Rover was connected by a long extension cord to a newly-completed underwater observatory. This observatory, known as the Monterey Accelerated Research System (MARS), provided power for the robot, as well as a high-speed data link back to shore. 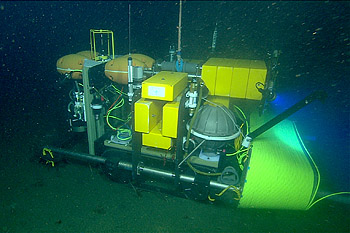 During July 2009, the Benthic Rover traveled across the seafloor while hooked up to the MARS ocean observatory. This allowed researchers to control the vehicle in “real time.” The yellow cable on the right side of the image is a long “extension cord” that unspools as the Rover moves. Image: © 2009 MBARI

According to Sherman, “Hooking up the Rover to the observatory opened up a whole new world of interactivity. Usually when we deploy the Rover, we have little or no communication with the vehicle. We drop it overboard, cross our fingers, and hope that it works.” In this case, however, the observatory connection allowed MBARI researchers to fine tune the Rover’s performance and view its data, videos, and still images in real time. Sherman recalls, “One weekend I was at home, with my laptop on the kitchen table, controlling the vehicle and watching the live video from 900 meters below the surface of Monterey Bay. It was amazing!”

Later this fall, the Rover will be sent back down to the undersea observatory site in Monterey Bay for a two-month deployment. Next year the team hopes to take the Rover out to a site about 220 km (140 miles) offshore of Central California. They will let the Rover sink 4,000 meters down to the seafloor, where it will make measurements on its own for six months. The team would also like to take the Rover to Antarctica, to study the unique seafloor ecosystems there. The Rover may also be hooked up to a proposed deep-water observatory several hundred miles off the coast of Washington state.

In addition to answering some key questions of oceanography, the Benthic Rover will help researchers study the effects of climate change in the ocean. As the Earth’s atmosphere and oceans become warmer, even life in the deep sea will be affected. The Benthic Rover, and its possible successors, will help researchers understand how deep-sea communities are changing over time.

Just as the rovers Spirit and Opportunity gave us dramatic new perspectives on the planet Mars, so the Benthic Rover is giving researchers new perspectives of a dark world that is in some ways more mysterious than the surface of the distant red planet.

Research and development of the Benthic Rover was sponsored by grants from the National Science Foundation and the David and Lucile Packard Foundation. 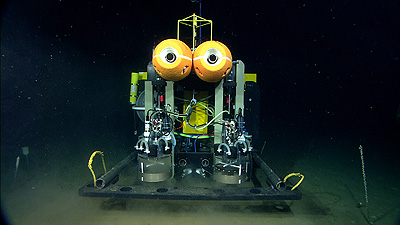 The Benthic Rover on the seafloor off Central California. Image credit: (c) 2007 MBARI 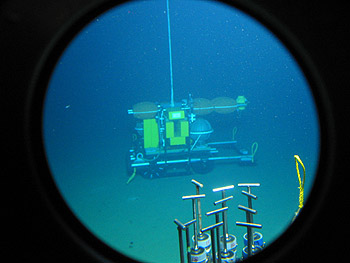 This image of the Benthic Rover on the seafloor off Central California was taken through a view port on the research submarine Alvin. Image credit: Ken Smith (c) 2006 MBARI

This computer drawing shows some of the key components of the Benthic Rover. Image credit: (c) 2006 MBARI 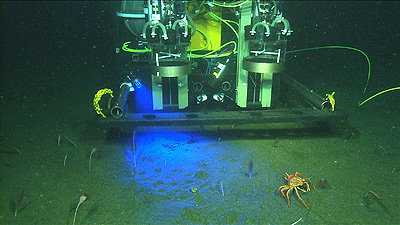 This computer drawing shows the Benthic Rover illuminating the seafloor with a blue light that causes chlorophyll to fluoresce. Such fluorescence can help scientists tell if blooms of microscopic marine algae have recently settled down onto the seafloor, where they may provide food for deep-sea organisms. Image credit: (c) 2009 MBARI 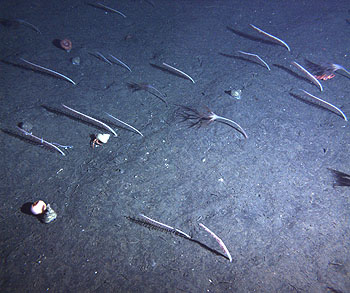 This photograph, taken by the Benthic Rover, shows a typical patch of seafloor at a depth of about 900 meters off the coast of Monterey Bay. The animals in the photo include two different kinds of sea pens, snails, anemones, a hermit crab, and a rockfish. Image credit: (c) 2009 MBARI