Mission to the Great Lakes 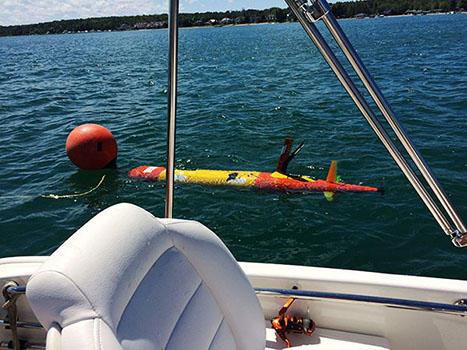 The Tethys LRAUV in Lake Michigan during the “sea” trials. Photo: Brian Kieft

MBARI’s Tethys long-range autonomous underwater vehicle (LRAUV) recently travelled to one of the world’s largest freshwater ecosystems—the Great Lakes. This operation is a collaborative effort between MBARI and the United States Geological Survey (USGS) Great Lakes Science Center, and is this vehicle’s first-ever freshwater deployment. The goal of this project is to demonstrate how Tethys, an emergent technology, can expand the USGS’s ability to better observe plankton communities in the Great Lakes ecosystem.

Tethys will spend approximately 26 days traversing the entire body of Lake Michigan to analyze the abundance of plankton at various depths. Currently, the Great Lakes Science Center monitors plankton booms and busts using surface satellite imagery coupled with vessel-based research. Tethys will be used in conjunction with these tools, and will expand the USGS datasets by providing an accurate depiction of plankton from the surface on down into the depths.

Tethys is designed to autonomously travel long distances, up to 2,000 kilometers (1,243 miles) at speeds of one meter (3.3 feet) per second. It is outfitted with biogeochemical sensing equipment to measure how communities of zooplankton and phytoplankton (microscopic animals and plants) are structured in size, distribution, and diversity. Plankton make up the base of marine and freshwater food webs, and phytoplankton play an important role in Earth’s carbon cycle by absorbing carbon dioxide and producing oxygen. Data gathered by Tethys will offer insight into Lake Michigan’s planktonic food webs and provide useful information for both fisheries management and climate-change studies. 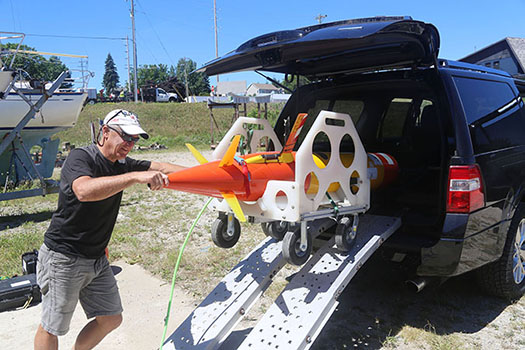 This mission presented a few unique challenges to MBARI Principal Investigator Brian Kieft and Senior Mechanical Engineer Brett Hobson. First, Tethys needed to be retrofitted by adjusting ballast and adding extra flotation devices to work in the less buoyant environment of a vast freshwater lake. Then Tethys was partially disassembled and shipped overland 4,000 kilometers (2,500 miles) from California to Charlevoix, Michigan, its longest journey ever by land. Upon arrival to Lake Michigan, Tethys was reassembled and then run through a series of successful “sea” trials. Finally, the LRAUV was packed into an SUV and transported to Muskegon to start the southern portion of its expedition. 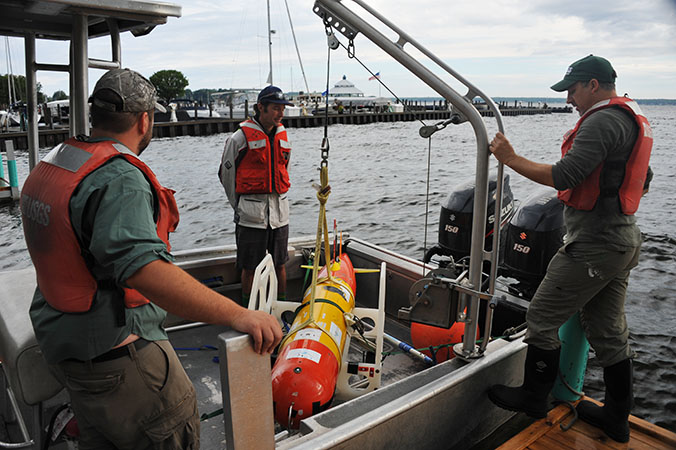 MBARI Principal Investigator Brian Kieft on board the USGS vessel with the Tethys LRAUV in the southern portion of Lake Michigan. Photo: Brett Hobson

During the first week of the expedition, the vehicle flew a 400-kilometer (250-mile) journey between Muskegon, Chicago, and Milwaukee. The team then transported the vehicle overland to run a second and longer transect through the north end of the lake.

This project, the first survey of its kind ever conducted in Lake Michigan, is certain to yield new discoveries and valuable insight into this massive yet mysterious freshwater ecosystem. And for the Tethys engineering team, this salt-free foray marks the start of what promises to be a productive and exciting collaboration.