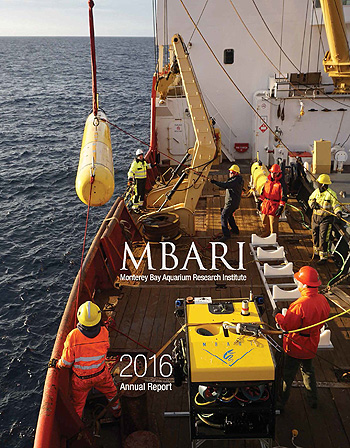 MBARI’s 2016 Annual Report was delivered from the printer this week. As usual, it is filled with ocean research adventures and discoveries, as well as colorful photographs of robots, researchers, and amazing deep-sea animals. It is available now as a PDF file on MBARI’s website.

Unlike many corporate annual reports, MBARI’s annual report consists mostly of articles about cutting-edge research carried out at MBARI during the 2016 calendar year. The articles in the new annual report cover a wide variety of topics, including an expedition to the Canadian Arctic, research on undersea mountains and deep-water corals, and the effects of plastics on marine food webs. It also describes ongoing research projects such as MBARI’s efforts to map seafloor habitats at centimeter scales, to monitor and catalog the soundscape of Monterey Bay, and to power robots using energy from ocean waves.

MBARI’s annual report is a labor of love, prepared by Nancy Barr, our web and print project manager, along with MBARI President and CEO Chris Scholin, Director of Information and Technology Dissemination Judith Connor, and Assistant to the President Meilina Dalit, as well as a large number of MBARI staff.  We hope readers will enjoy this view into the fascinating and futuristic work being done at the Monterey Bay Aquarium Research Institute.