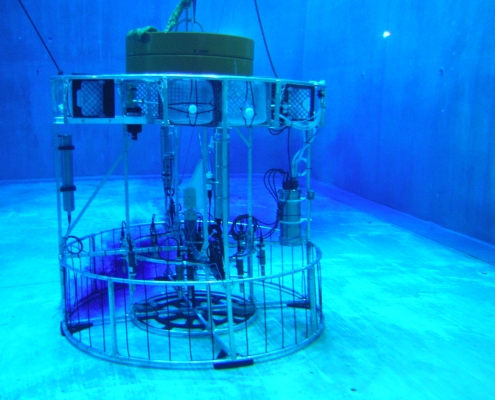 Floating in the clear blue waters of an indoor test tank, MBARI’s first Free Ocean CO2 Enrichment (FOCE) system was a circular cage of pipes intended to drench the area inside with water rich in carbon dioxide (CO2). Inspired by an approach to study the effects of rising CO2 levels on land called Free-Air CO2 Enrichment (FACE) experiments, FOCE was designed to answer a critical question—how do increasing levels of carbon dioxide in the ocean affect marine plants and animals? 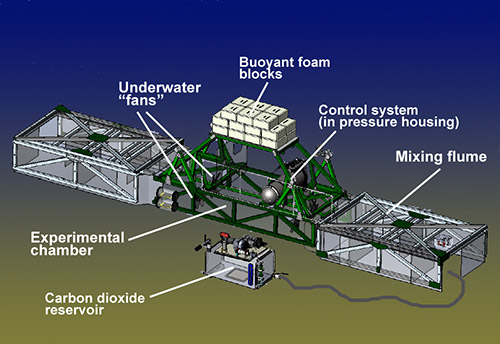 This diagram shows some of the key components of the deep-water FOCE system. Image: © 2012 MBARI

The FOCE system was developed by a team led by Scientist Peter Brewer and Engineer Bill Kirkwood, and involving a large contingent of engineers along the way. In setting up the FOCE system, the scientists and engineers at MBARI were looking to not only illuminate the effects of CO2 on marine organisms, they were searching for a way to take their experiments from the laboratory into the open ocean.

Much of what scientists know about the effects of ocean acidification on marine organisms comes from controlled experiments carried out in laboratories, or field observations in environments like natural CO2 vents, which may in some ways mimic the chemistry of future carbon-rich oceans. There are advantages and disadvantages of these approaches. Most laboratory experiments suffer from artificial laboratory conditions that cannot replicate the dynamic natural conditions found in ocean habitats. And although studies near CO2 vent sites have been highly informative concerning the response of natural communities to increased acidity, their CO2 levels are often highly variable, increasing the difficulty of determining key CO2 levels that result in ecosystem damages. FOCE systems were designed to enable experiments to measure the effects of changes in the carbonate chemistry of the ocean on whole communities of interacting marine organisms under near-natural conditions, stepping beyond studies of individual organisms under artificial laboratory conditions.

The FOCE system attempts to provide researchers with the ability to precisely manipulate experimental conditions while incorporating the complexities and variability of a natural community. As the researchers wrote in their recent paper, “These advantages make FOCE an ideal approach to help address current gaps in understanding of ocean acidification impacts, including long-term and multi-stressor effects.”

Over a decade after its initial test in MBARI’s indoor test tank, the FOCE system has evolved into a powerful and versatile tool that is being used globally to expand our knowledge of ocean acidification and how oceanic ecosystems may react to future conditions. This ability to perform long-term ocean acidification experiments on whole marine communities has revealed new, unexpected findings that have challenged what scientists thought they knew, and sparked more questions that need to be explored.

The new paper describes how different FOCE experiments have been used in a wide variety of habitats. It also summarizes the findings and limitations of each experiment. 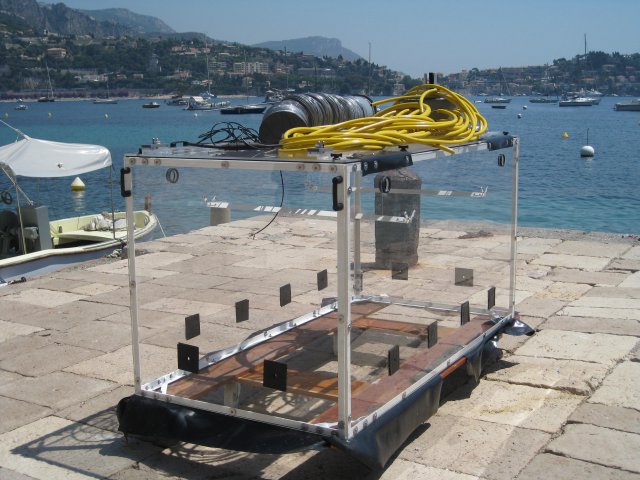 European FOCE (eFOCE) sitting on the dock, ready for deployment off the southern coast of France. This design was a unique version of FOCE built to operate in a vertical position in a seagrass bed. Image by Paul Mahacek

FOCE in a Mediterranean seagrass bed

In Europe, researchers used FOCE to observe the effects of ocean acidification on a Posidonia oceanica seagrass meadow in the northwest Mediterranean, off the coast of France. The study, conducted from June to November 2014, spanned multiple seasons and tested various hypotheses.

In this case, the FOCE system allowed researchers to study the response of the seagrass meadow as a community, and observe it over a longer time period. It also revealed unexpected results that highlighted the importance of healthy habitats in buffering against future pH changes. 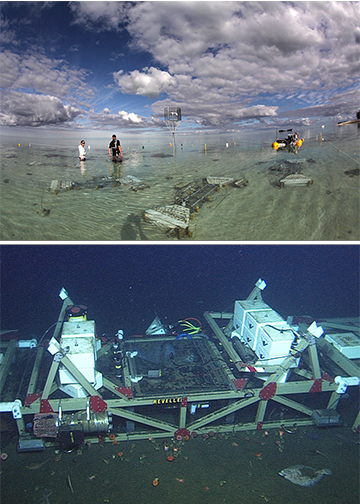 Upper photo: The FOCE system on a reef flat near Heron Island, off the northeast coast of Australia. Image by David Kline. Lower photo: The first deep-water FOCE system deployed in Monterey Bay. The experimental chamber in the center of the photo allowed researchers to track sea urchin responses to different pH levels. Image: © 2011 MBARI

FOCE on the Great Barrier Reef

Similarly, researchers in Australia utilized a FOCE system to observe the effects of lowered pH on coral at Heron Island in the Great Barrier Reef. Their FOCE system, established in a highly dynamic near-shore coral community, provided the ability to study corals outside of a stable laboratory setting. These experiments showed that some species of coral may be more resilient to changes in pH than previously thought.

FOCE in the deep sea

In Monterey Bay, the first deep-water FOCE experiment showed how changes in pH can affect the foraging behavior and movement of deep-sea urchins. During this experiment, MBARI researchers used a series of “raceways” to track the foraging ability of individual sea urchins at different pH levels.

Most recently, the antFOCE experiment was installed under ice in the shallow waters near Casey Station, Antarctica. This experiment demonstrated the ability of FOCE systems to collect valuable data in even the harshest environments. 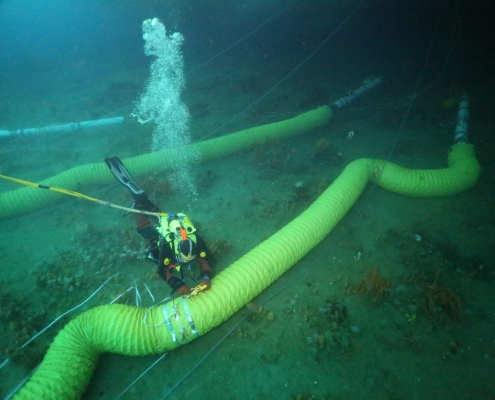 These large tubes are part of the antFOCE system. Chemical reactions occur more slowly in the frigid waters of the Antarctic, so these 30-meter-long tubes allow time for CO2-saturated seawater to become more acidified before it flows into the antFOCE experimental chamber. Image by Glenn Johnstone

Like many experimental systems, the FOCE design has weaknesses. For example, because study plots must be enclosed in partially-open (flow-through) enclosures to help control seawater chemistry, the conditions experienced by study organisms inside FOCE enclosures are somewhat different from the natural environment nearby.  Seawater flowing through these enclosures is enriched in CO2, but keeps normal levels of plankton and varies in temperature and most other factors just as in study plots outside FOCE chambers. Other factors, such as currents or light levels may be diminished within chambers, compared to areas outside FOCE chambers. Researchers have responded to this concern by including “control” plots within FOCE enclosures that do not experience acidification, as well as open plots outside chambers. 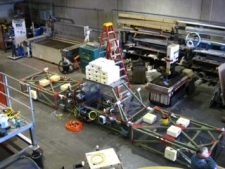 The deep-water FOCE system under construction at MBARI prior to deployment in Monterey Bay. Image: © 2011 MBARI

FOCE researchers are now developing guidelines for FOCE experiments that will foster collaboration between different research groups. This will allow FOCE systems to evolve toward consistent methods for testing hypotheses and sharing technology and design improvements.

“The next generation of FOCE experiments ideally would include increased replication, longer experiments to encompass multi-generational times for benthic species and whole and multiple season cycles, multiple environmental-factor approaches, and the use of ancillary incubation chambers for examination of short-term physiological and behavioral responses,” the researchers suggest in their paper.

The authors of the recent FOCE paper point out that there is an urgent need for further studies utilizing FOCE systems, in addition to laboratory experiments and field observations of CO2 vents and other proxy environments. They note that it is imperative that humans prepare for the inevitable changes in the ocean. High-quality data from a variety of research methods will allow resource managers to predict and perhaps mitigate the consequences of these changes and protect ocean ecosystems.

In summary, FOCE systems are an indispensable tool to view the impacts of a changing ocean on whole ecosystems. As the researchers put it, “The knowledge gained from further FOCE experiments would make an important contribution to improving our ability to forecast the impacts of ocean acidification on natural ecosystems and to better support the management of its impacts.”

Short video about ocean acidification and the European eFOCE system: