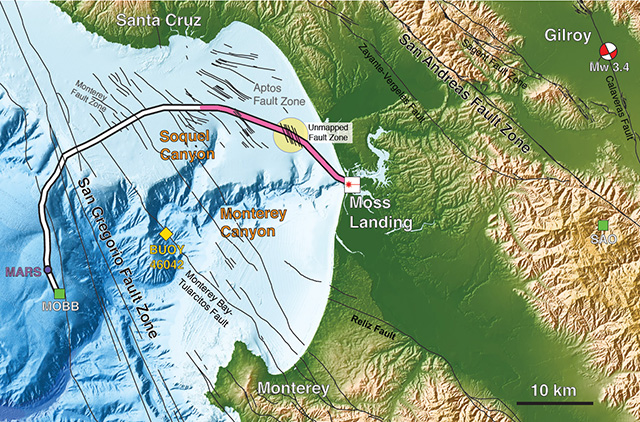 This map shows the MARS observatory cable in Monterey Bay. The section of the cable shown in red was used as a high-definition seismic array to study faults underneath the seafloor. The red and white circle in the upper right corner of the image marks the epicenter of the magnitude 3.5 earthquake that was detected during the experiment. A previously uncharted fault zone is shown inside the yellow circle. Image: Nate Lindsey/UC Berkeley

(Adapted from a joint news release with the University of California, Berkeley, Lawrence Berkeley National Laboratory, and Rice University)

In a paper appearing this week in the journal Science, researchers describe an experiment that turned the seafloor cable on MBARI’s MARS ocean observatory into the equivalent of 10,000 seismic stations on the ocean floor. During a four-day experiment in Monterey Bay, the researchers recorded a 3.5 magnitude quake, detected storm waves and internal waves, and discovered a new fault zone.

The technique, which was initially tested using fiber-optic cables on land, could provide much-needed data on quakes that occur under the sea, where few seismic stations exist. Eventually the technique could be applied to seafloor telecommunications cables around the world, helping scientists learn about offshore earthquakes and geologic structures hidden deep beneath the ocean surface.

The study was a joint effort by researchers from MBARI, the University of California, Berkeley, Lawrence Berkeley National Laboratory (Berkeley Lab), and Rice University.

“There is a huge need for seafloor seismology,” said Nate Lindsey, a UC Berkeley graduate student and lead author of the paper. “Any instrumentation you get out into the ocean, even if it is only for the first 50 kilometers from shore, will be very useful.”

Lindsey and Jonathan Ajo-Franklin, a geophysics professor at Rice University in Houston and a faculty scientist at Berkeley Lab, led the experiment with the assistance of Craig Dawe, the manager of MBARI’s MARS observatory in Monterey Bay.

The MARS (Monterey Accelerated Research System) observatory is like a giant underwater USB port, supplying electricity and a high-speed data connection to instruments on the deep seafloor just outside Monterey Bay. The observatory is connected to shore by a 52-kilometer-long (32-mile-long) seafloor cable.

The experiment described in the recent Science paper was conducted over four days in March 2018, when the observatory was off-line for maintenance. The researchers used just the first 20 kilometers (12.4 miles) of the cable for their test.

The researchers used a new technology called Distributed Acoustic Sensing, sending ultrashort pulses of laser light down the cable and timing millions of tiny reflections (backscatter) from different parts of the cable. This allowed them to measure infinitesimal changes in the length of each two-meter (six-foot) section of cable. In effect, they turned the 20-kilometer length of cable into 10,000 individual motion sensors.

“These systems are sensitive to changes of nanometers to hundreds of picometers for every meter of cable,” Ajo-Franklin said. “That is a one-part-in-a-billion change.”

Changes in the length of the cable can be caused by many different things, including ocean waves, seafloor currents, and earthquakes. 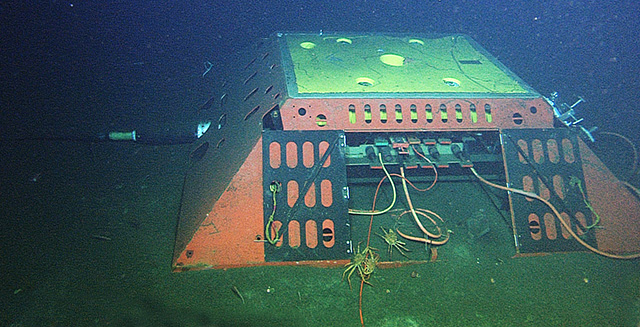 This image shows the “main science node” of the Monterey Accelerated Research System (MARS) ocean observatory in Monterey Bay, California. On the left side of the image is the main cable connecting the observatory to shore. Part of this cable was used for the “dark fiber” experiment. Image: © 2009 MBARI

“The beauty of fiber-optic seismology is that you can use existing telecommunications cables without having to put out 10,000 seismometers,” Lindsey said. “You just walk out to the site and connect the instrument to the end of the fiber.”

During the underwater test, they were able to measure seismic waves from a magnitude 3.4 earthquake that occurred 45 kilometers (28 miles) inland near Gilroy, California. They also mapped several submarine fault zones in Monterey Bay, including one that was previously unknown. They were also able to detect ocean waves both at and beneath the sea surface.

According to Lindsey, there is rising interest among seismologists to record Earth’s ambient noise field, which is caused in part by interactions between the ocean and the land—waves sloshing around near coastlines.

“This is really a study on the frontier of seismology, the first time anyone has used offshore fiber-optic cables for looking at these types of oceanographic signals or for imaging fault structures,” said Ajo-Franklin.

The tests so far have all used cables that are “dark,” meaning they are not actively carrying data. To make use of the world’s active fiber-optic cables, Lindsey and Ajo-Franklin need to show that they can ping laser pulses through one channel in a fiber without interfering with other channels that carry independent data packets. The researchers are currently conducting experiments with such “lit” fibers, while also planning fiber-optic monitoring of seismic events in a geothermal area south of Southern California’s Salton Sea.

November 28, 2019 – In a new paper in Science magazine, researchers describe an experiment that turned the seafloor cable on MBARI’s MARS ocean observatory into the equivalent of 10,000 seismic stations on the ocean floor.
Feb 18, 2016 - Researchers at MBARI have learned a lot about Monterey Bay using robotic submersibles to look deep below the bay’s surface. Now they can listen to the bay as well, using an ultra-sensitive underwater microphone.
On June 6, 2011 the ALOHA Cabled Observatory (ACO) "went live,"returning data from instruments on the deep seafloor, about 60 nautical miles north of Oahu, Hawaii, and 4,800 meters below the ocean surface. Funded by the University of Hawaii and the National Science Foundation (NSF), the ALOHA observatory uses a retired telecommunications cable to provide data and electrical connections for a variety of research instruments.
In late February, MBARI marine-operations staff connected two new instruments to the MARS ocean observatory in Monterey Bay. One instrument, developed by John Horne at the University of Washington, uses sound to monitor marine life. The second instrument is an ultra-sensitive seismometer sponsored by Barbara Romanowicz at the University of California, Berkeley.