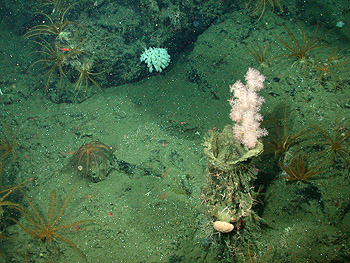 The Gersemia juliepackardae coral lives on rocky deep-sea outcrops from about 500 to 2,000 meters below the surface. Sometimes, as in this photograph, it grows on top of deep-sea sponges.

During the November 3 meeting of MBARI’s board of Directors, board member Julie Packard was presented with a plaque containing photos of a new species of deep-sea coral that was recently named after her.

The scientific name for the new coral is Gersemia juliepackardae. In the journal article describing the new coral, the researchers write, “The new species is named in honor of Julie Packard, executive director of the Monterey Bay Aquarium, Monterey, California, for her dedication to ocean stewardship and conservation, and for elevating public awareness about the ocean environment.”

The delicate, pale-pink coral was first discovered and collected by MBARI scientists at Rodriguez Seamount in 2004. Since then, it has been observed and collected at other seamounts, in Monterey Canyon, and on the continental slope. Its known range is from Southern California to northern Washington.

The coral lives on rocky outcrops from about 500 to 2,000 meters below the surface. As a “soft coral”, it does not have a hard, calcareous skeleton like tropical, reef-building corals. It does, however, have tiny calcareous needles (“sclerites”) inside its body, which help it stay upright. 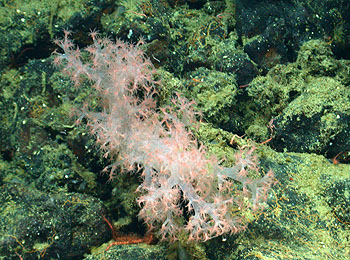 This close-up view of Gersemia juliepackardae shows its small pink polyps, whose tentacles catch food particles that drift by on the ocean currents.

Ms. Packard was also a member of the Pew Oceans Commission, which in 2003 issued recommendations for a comprehensive overhaul of national ocean policy. In 1998 she received the Audubon Medal for Conservation, and in 2004 was awarded the Ted Danson Ocean Hero Award by Oceana, a leading ocean conservation organization. We at MBARI are happy to add to her honors by naming this beautiful deep-sea coral after her.