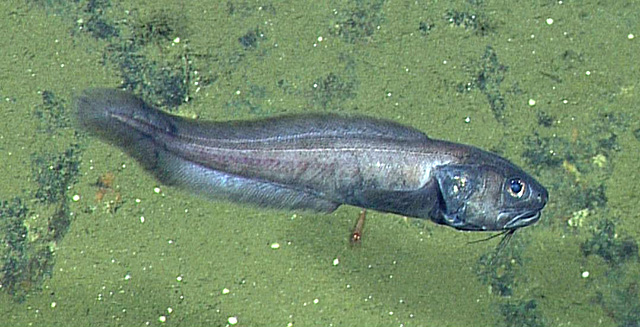 Cusk eels such as this one seem to prefer seafloor areas where oxygen concentrations are extremely low. Image: © 2015 MBARI

Oxygen—it’s a basic necessity for animal life. But marine biologists recently discovered large numbers of fishes living in the dark depths of the Gulf of California where there is virtually no oxygen. Using an underwater robot, the scientists observed these fishes thriving in low-oxygen conditions that would be deadly to most other fish. This discovery could help scientists understand how other marine animals might cope with ongoing changes in the chemistry of the ocean.

The researchers described their discovery in a recent article in the journal Ecology. The lead author of the article, Natalya Gallo, is a postdoctoral fellow at the Scripps Institution of Oceanography. She worked closely with professor Lisa Levin and other Scripps researchers on the paper, as well as with MBARI biologist Jim Barry, who led the research cruise. 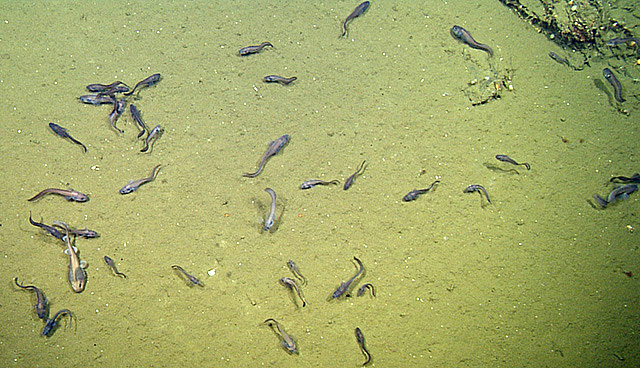 Cusk eels, lollipop sharks, and grenadiers congregate on the seafloor in the Gulf of California. Image: © 2015 MBARI

In 2015, Barry, Gallo, and eight other researchers conducted a series of dives in several deep ocean basins in the Gulf of California using MBARI’s remotely operated vehicle (ROV) Doc Ricketts—a state-of-the-art underwater robot. Gallo was particularly interested in these areas because her PhD thesis focused on animals that live in very low-oxygen environments. The deep waters of the Gulf of California have some of the most extreme low-oxygen habitats in the world.

“I could hardly believe my eyes,” Gallo wrote in MBARI’s cruise blog following an ROV dive in the Cerralvo Trough. “We observed cusk eels, grenadiers, and lollipop sharks actively swimming around in areas where the oxygen concentration was less than one percent of typical surface oxygen concentrations. We were in a suboxic habitat, which should exclude fish, but instead there were hundreds of fish. I immediately knew this was something special that challenged our existing understanding of the limits of hypoxia [low-oxygen] tolerance.” 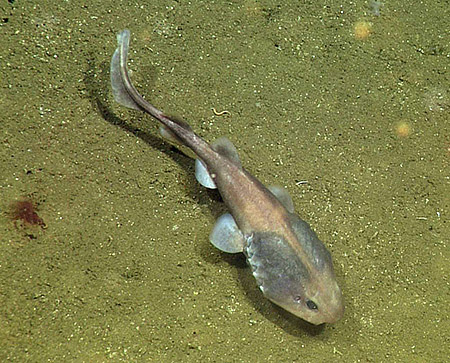 Lollipop sharks have large heads and gills, which may help them absorb oxygen in low-oxygen environments. Image: © 2015 MBARI

“Many other types of fish are considered tolerant of low-oxygen conditions,” Barry commented.” But the fish in these parts of the Gulf are like the winners among a group of elite Olympic athletes.”

The researchers still don’t know exactly how these fish are able to survive, and even thrive, under such harsh conditions. The cat sharks have large heads with extensive gill chambers and the cusk eels have vibrant red gills, which may be particularly good at absorbing oxygen from the surrounding water. The fish are also quite small—less than 30 centimeters (one foot) long—and the cusk eels have soft flabby bodies and thin, weakly developed bones—all traits that might help them conserve energy. 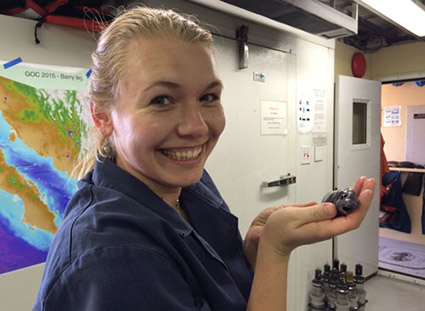 Why the fish congregate in these particular areas is another mystery. Barry speculates that they might be finding food or avoiding predators. In some low-oxygen areas the researchers saw snails, sea stars, and sea pens on the seafloor. But in the lowest-oxygen areas, the muddy seafloor looked like a barren moonscape, suggesting that even small invertebrates had a hard time surviving.

“We hope to go back to the Gulf soon to try and address some of these questions,” Barry said.

December 7, 2020 – MBARI scientists confirm the first evidence of bioluminescence in a sponge, showing that the sponges contain the chemicals necessary to make light within their bodies.
Nov 23, 2020 – Researchers recently discovered the largest aggregation of fishes ever recorded at abyssal depths (below 3,000 meters or 9,800 feet) in the ocean.
August 14, 2020 – Today the New York Times ran an editorial highlighting the potential effects of deep-sea mining on midwater animals.
July 21, 2020 – Using a sweeping DNA analysis technique, MBARI researchers explored the boundaries between different communities of tiny drifting animals along the California coast.