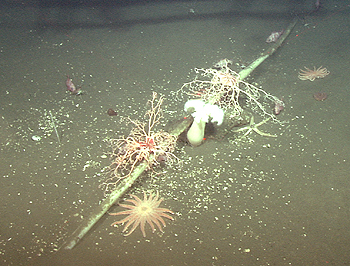 This photograph shows a variety of marine life living near the Pioneer Seamount cable, which crosses the continental shelf offshore of Half Moon Bay. The animals in this image include several sea stars and basket stars, an anemone, and a number of young rockfish. For scale, the cable is about 3.2 cm (1.25 inches) in diameter. Image: (c) 2003 MBARI.

What are the environmental effects of laying a telecommunications cable on the seafloor? How does it affect the ocean bottom and the animals that live there? Although literally millions of kilometers of communications cables have been placed on the seafloor over the last century, few peer-reviewed scientific papers have documented the effects of these cables on marine life. A recent paper by researchers at MBARI and the Monterey Bay National Marine Sanctuary describes a unique biological survey of a cable on the deep seafloor off Central California. This survey found that the cable had only minor impacts on animals living on and within the seafloor.

Modern telecommunications cables are typically surveyed during and immediately after their installation to determine whether the cable has been installed properly on the seafloor. However, such installation surveys do not normally consider the biological effects of the cables. In fact, only one or two scientific studies have ever looked at the biological impacts of deep-sea cables. This is not surprising, considering how expensive it is to perform even a single dive on a deep-sea cable, let alone multiple dives to study various depths and sea-bottom environments. 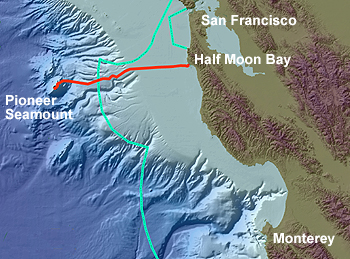 To help fill this information gap, MBARI collaborated with the National Oceanic and Atmospheric Administration division of Oceanographic and Atmospheric Research (NOAA-OAR) and the Monterey Bay National Marine Sanctuary to perform a detailed survey of the Pioneer Seamount cable. As its name implies, this relatively short undersea cable runs from Half Moon Bay to the Pioneer seamount, about 95 kilometers (60 miles) offshore. The cable crosses a wide variety of seafloor environments, snaking over erodible sedimentary rocks near shore, continuing across the silt-covered plains of the continental shelf and slope, and then climbing the rugged volcanic rocks of the Pioneer Seamount.

The Pioneer Seamount cable was originally installed in 1995 as part of an experiment to detect changes in ocean temperature by monitoring the speed of sound waves in the deep sea. Since its initial installation, the cable has been broken twice, probably after being snagged by commercial fishing boats trawling the seafloor. The first time the cable broke, NOAA-OAR (the operator or the cable) spent hundreds of thousands of dollars to repair it. After the cable was damaged a second time, the fate of the cable became uncertain.

As part of a Sanctuary permit to continue using the cable, NOAA-OAR was required to perform an underwater survey to determine whether parts of the cable were damaged, tangled, or buried in seafloor sediment. MBARI researchers got involved because they wanted to find out how the cable had affected marine life. By pooling their resources, the three organizations were able to complete this unique impact study, whose total cost was roughly half a million dollars. The project was managed by Irina Kogan, a joint appointee of MBARI and the Sanctuary, who was also the lead author on the research paper. 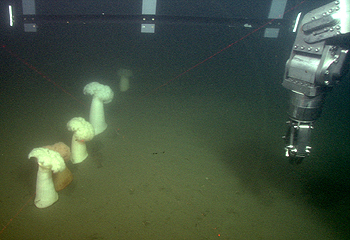 This photograph, taken by ROV Ventana, shows a line of sea anemones attached to the Pioneer Seamount cable, which is buried beneath the sediment. In some areas, MBARI’s ROV pilots were able to follow the buried cable by looking for such lines of anemones. They also used an electronic cable-tracking system, part of which is visible at the top of this image. Image: (c) 2003 MBARI.

In order to perform a thorough study of the Pioneer Seamount cable, MBARI had to use all three of its research vessels. First, MBARI researchers, led by geologist Gary Greene, used side-scan sonar on board the the R/V Zephyr to survey the portion of the cable that lies over the continental shelf. This survey provided information on the geology of the area, and allowed scientists to create a base map that was used to plan later dives by MBARI’s remotely operated vehicles (ROVs).

In the first set of ROV dives, scientists used the R/V Point Lobos and ROV Ventana to study five different segments of the cable at depths ranging from 20 to 240 meters (about 60 to 800 feet). Five months later, the same team used MBARI’s larger research vessel, the R/V Western Flyer, and ROV Tiburon to study eight offshore sections of the cable in water as deep as 1,900 meters (6,200 feet). These dives were directed by MBARI geologist Charlie Paull.

During these dives, the ROVs carried electronic cable-tracking systems that allowed the researchers to find parts of the cable that had been buried under sediment (presumably by winter storm waves). As the ROVs “flew” slowly along the cable route, scientists collected sediment samples, video, and numerous still images of animals living on or near the cable. The ROVs also collected similar samples and video in undisturbed areas about 100 meters (330 feet) away from the cable.

After each cruise, marine biologists Linda Kuhnz and Susan Von Thun spent many hours in MBARI’s video lab counting and identifying animals large enough to be seen in the video. Kuhnz also examined 136 sediment samples under a microscope, counting and identifying all the tiny animals that live within the sediment. In both cases, the researchers’ primary goal was to determine if there were any differences in the number or diversity of animals near the cable compared with areas away from the cable.

After an exhaustive (and exhausting) statistical analysis, the researchers found that the cable had few detectable effects on marine life. For example, there were no significant differences in the numbers or types of sediment-dwelling animals in samples collected near the cable compared with those collected away from the cable. Similarly, of the seventeen broad groups of animals observed in the video, only two were significantly affected by the cable. These two animals, anemones and flatfish, were actually more abundant near the cable than in the undisturbed areas. 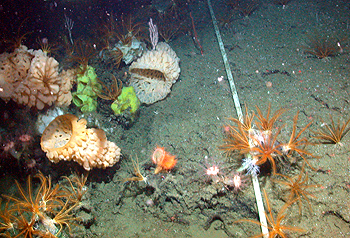 This photograph shows the Pioneer Seamount cable on the slopes of Pioneer Seamount. Near the cable are colorful sponges, a flytrap anemone, mushroom corals, and feathery crinoids. Image: (c) 2003 MBARI

In silty areas over the continental shelf, the most obvious biological effects of the cable were the neat lines of sea anemones that scientists found growing on the cable itself. In many cases, these sea anemones were attached directly to parts of the cable that had been buried under mud or silt. The scientists concluded that the anemones would probably not have been able to colonize such soft-bottom areas without the presence of the seafloor cable, which provided a firm footing for the animals.

The researchers also noted a more subtle biological effect in some shallow, soft-bottom areas, where fishes, especially flatfish, were slightly more common near the cable. These fishes were probably taking advantage of the shelter and increased vertical relief created by the cable.

At the shallowest study site (about 20 meters deep), winter waves had apparently moved the cable from side to side, eroding grooves in the relatively soft bedrock, and thus displacing bottom-dwelling animals. However, where the cable crossed deeper rocky-bottom areas, such as the slopes of Pioneer seamount, the scientists could find no differences between the numbers of sponges, soft corals, and other deep-sea animals near the cable and the numbers of these animals in undisturbed areas.

Overall, this joint research project provided a wealth of new information about the effects (or lack of effects) of submarine cables on marine life, both close to the shoreline and in deeper water. MBARI scientists were happy to obtain new data on seafloor biological communities. Resource managers at the Sanctuary were able to gain information that will help them review future projects and decide what to do with existing telecommunications cables on the seafloor.