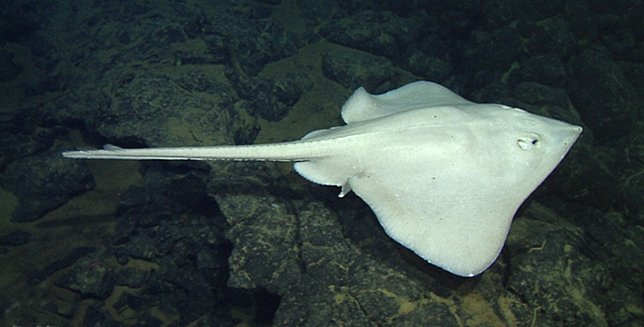 MBARI’s vast collection of deep-sea video footage is revealing new insights on some of the ocean’s most mysterious species. In a recent study, researchers compiled data from 18 years of rare video observations on deep-water skates. Their recorded data expands the known depth and geographic ranges for two species, and reveals that one species, Bathyraja trachura, appears to be uniquely tolerant of extremely low-oxygen environments.

MBARI Senior Research Technician Linda Kuhnz, who was the lead author on the study, has watched the deep’s most fascinating creatures glide across MBARI’s video monitors for almost 18 years. “This is the first time that a paper has described these animals in their own environment,” Kuhnz said. “The thing that’s really exciting about this study is that, although some people have trawled for skates and collected some of the deepest known specimens, we now have video observations of the deepest living skates that anyone has observed.”

Skates are related to sharks. They are found throughout the world ocean from shallow coastal waters to the open ocean, but they have rarely been observed in deeper environments. Shallow-water skates are better studied, but knowledge of the deeper diving species in this group is limited. That’s because a lot of information comes from animals brought up in trawl nets, which give scientists little to no information on their behaviors, habitat preferences, or depth ranges. These rare creatures are difficult to find, and when they are found, they cannot be easily collected for study from these deep areas. 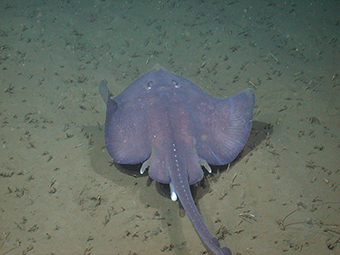 But Kuhnz and other researchers at MBARI have found a way around that.

MBARI holds an extensive collection of deep-sea video captured by cameras mounted on remotely operated vehicles (ROVs) that have been prowling the depths of the ocean for more than three decades. MBARI catalogs and stores these videos as part of the institution’s Video Annotation and Reference System (VARS). The VARS database now holds nearly 26,000 hours of video from over 6,500 ROV dives.

“VARS is a unique asset that MBARI has invested in,” Kuhnz said. “It’s only through the early foresight of our founder, David Packard, and others, that we have this treasure trove of information.”

On any given day, in the dim light of MBARI’s video lab, you will find Kuhnz and other video lab technicians working in front of computer monitors under the electric glow of the screens. These technicians spend countless hours, both on land and at sea, assisting with research, gathering information and combing through the video collection to document the unique animals and geological features that they see. To date, they have made more than 6.7 million observations of life in the deep sea.

For this study, Kuhnz searched the VARS database starting in 2000, “I looked at every skate in our entire database for the last 18 years.” 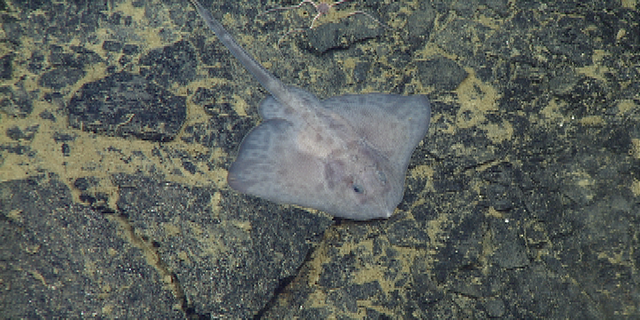 Researchers found that this skate, Amblyraja hyperborea, was one of the species that occupied the widest depth range. © 2005 MBARI

The result was the first large-scale, long-term investigation of deep-water skates. The study analyzes 2,192 observations of individual skates in a variety of habitats—from soft-bottom mud flats and rocky outcrops to more unexpected habitats like whale falls, hydrothermal vents, lava fields, and the walls of submarine canyons.

The researchers also recorded the behaviors exhibited by each animal, whether it was resting on the bottom sediment or skimming across the seafloor. The team discovered that different skates have different ways of moving across the sediment and swimming through the water column. Some of the skates were observed using their “walking legs” (the pelvic fins) to stay close to the bottom while moving to hunt, or to propel themselves up off the seafloor and settle back down onto the sediment (see video below). Individuals in the species Bathyraja abyssicola were also observed using their walking legs to maneuver up the walls of submarine canyons.

Kuhnz explains, “Each of these species is adapted to slightly different habitats. They’re partitioning resources; they can’t all eat the same thing and they can’t all live in the same place.”

The scientists first learned to identify each species of skate, then recorded extensive biological data (species, sex, behavior) and environmental data (location, depth, habitat type, temperature, oxygen) for seven species. They came to conclusions about the differences in the behavior, distribution, and habitat use of each of the different species of skates.

For example, they found eight deep-diving skates at the deepest depths ever observed for these animals. These were initially thought to be Bathyraja microtrachys, but their characteristics were different enough from the known species to support the theory that they may have discovered an entirely new species. 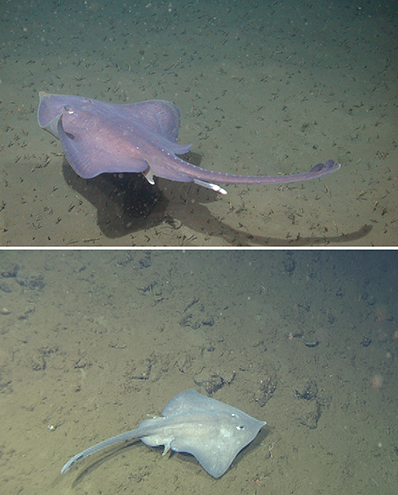 The findings of this study expand the known depth and geographic ranges for two species, Bathyraja trachura (top) and Bathyraja microtrachys (bottom). © 2005 MBARI

The researchers also observed that Bathyraja trachura persistently occupied low-oxygen environments. “It’s not like the other skates can’t visit these areas, but this is the only species that can stay there consistently,” Kuhnz said. “This species is living in extremely low-oxygen environments and we don’t know how it does this. In the future, it would be really cool for someone to look at the physiology of that animal and see how it’s able to exploit that habitat.”

The results of this research illustrate how the use of in situ video observations can provide greater spatial and behavioral data than trawl studies, and fill in the gaps of our baseline knowledge of these scarce species. These data become especially important as climate change and exploitation of ocean resources continue to change biological communities.

MBARI’s ROVs continue to dive into the depths of the ocean and collect ever more footage of the species that live there. “That’s the beauty of our database,” Kuhnz said. “We have expeditions where we’re going out and gathering information on geology, for example, and in the meantime we’re also collecting data about what else is going on in these environments.”

Future research might target specific species of skates and attempt to collect specimens for more detailed analyses, especially when it comes to identifying undescribed species. But this is likely to be a challenge, “It’s really expensive to conduct deep-sea studies compared to terrestrial or shallow-water environments,” Kuhnz said. “It takes a lot of technology and resources to do it.”

“This study is the perfect example of being able to use the VARS database to answer all kinds of questions. These particular data are entirely opportunistic. In most cases, we didn’t go looking for skates. We just happened to be at sea, and we just happened to see them. When you are able to take advantage of MBARI’s vast observations over 30 years, you end up with invaluable information about the deep sea,” added Kuhnz.

Kuhnz continues the quest for new knowledge to solve the mysteries of these deep-sea species, “Somewhere down the line there’s going to be a new piece of information that springs up and gives us an answer to a piece of the puzzle we’ve wondered about, and that just makes my day,” she said.

December 7, 2020 – MBARI scientists confirm the first evidence of bioluminescence in a sponge, showing that the sponges contain the chemicals necessary to make light within their bodies.
Nov 23, 2020 – Researchers recently discovered the largest aggregation of fishes ever recorded at abyssal depths (below 3,000 meters or 9,800 feet) in the ocean.
August 14, 2020 – Today the New York Times ran an editorial highlighting the potential effects of deep-sea mining on midwater animals.
July 13, 2020 – A new research paper shows that some of the most common and iconic deep-sea corals can create their own light.
Scroll to top