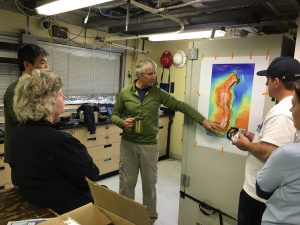 This week researchers from MBARI and the Monterey Bay National Marine Sanctuary are studying the lush gardens of deep-sea corals and sponges that grow on Sur Ridge, an underwater mountain about 37 kilometers (23 miles) west of the Big Sur coast.

The researchers are using MBARI’s remotely operated vehicle (ROV) Doc Ricketts and its host vessel, the Western Flyer, to collect video and samples from the slopes and crest of Sur Ridge. They are trying to understand why this area is such a favorable habitat for corals and how fast the corals are growing. Some of the deep-sea corals on Sur Ridge can live for over a century.

To follow this exciting expedition, check out the background information and daily blog entries on the sanctuary website.

The underwater gardens of Sur Ridge were first discovered in December 2013, when MBARI and sanctuary researchers were on an expedition to study deep-sea animals on the floor of Monterey Bay. On the second-to-last day of that expedition, the researchers had a little extra time, so they decided to do an ROV dive on Sur Ridge. They were surprised and delighted to discover that parts of Sur Ridge were home to large numbers of deep-sea corals and sponges. Intrigued, they returned to the area in June 2014 to explore more of the seamount, and found even more impressive coral gardens.

During the current expedition, the researchers plan to conduct a series of biological surveys across different parts of Sur Ridge, including areas that have never been seen before. This will help scientists get a better idea of the full diversity of habitats and animals that live on this fascinating underwater mountain. 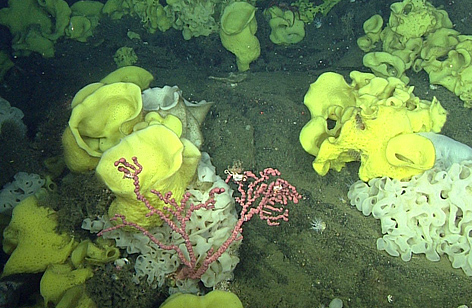