Increasing the odds of squid reproduction in the deep sea 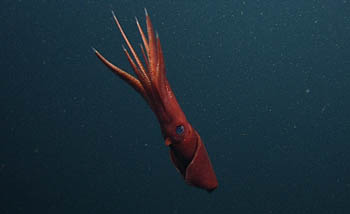 A female Octopoteuthis deletron in the water column observed by MBARI’s remotely operated vehicle Ventana on December 6th 2007. This animal was observed at 854 meters depth in Monterey Canyon. Spermatangia were present on the dorsal arms. They are visible as white dots and indicated by a red circle in the picture below.

Most of the squid we know as “calamari” are shallow-water species that live near the shore. These species have short lives. Once they mature, after about a year, they experience a single brief breeding period then die. But many more squid species live in deep water and the details of their lives, particularly their mating behavior, are shrouded in mystery.

Hendrik Hoving and his research colleagues analyzed video images of the deep-sea squid Octopoteuthis deletron, as well as preserved specimens collected between 400 and 800 meter depths by MBARI remotely operated vehicles. Surprisingly, they discovered that male Octopoteuthis attached their spermatangia (sperm packets) to other males as often as to females of the species. Given that same-sex mating will not produce offspring, how do the scientists explain their findings?

The researchers think that male squid may mate with any member of their species they encounter, which helps these rare animals take advantage of any possible chance to reproduce. Co-author Bruce Robison explains, “This is a solitary species that is not very abundant; it lives in deep, dark waters where opportunities for reproduction are few and far between. In response to that challenge, this reproductive strategy ensures that no opportunity for successful mating is lost. It’s kind of like buying a Lotto ticket, except the odds are much better.”

Regardless of the many challenges of life in the deep sea, males and females must find mates for the survival of a species. Hoving suggests that this squid species does not spend much effort identifying the sex or courting of potential mates, but puts its energy into generating large quantities of sperm, for all possible encounters. In the end, Hoving says, “This behavior reflects the limited window of opportunity available to deep-sea squid for reproduction.” 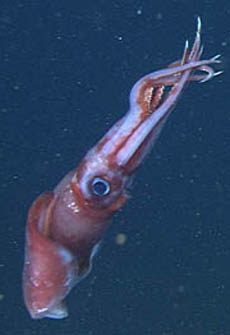 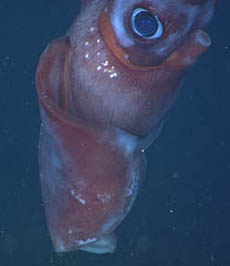