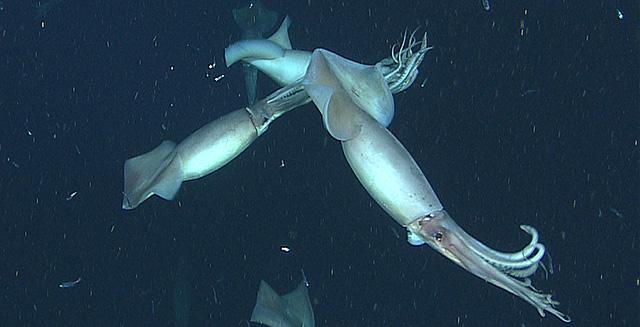 A large group of Humboldt squid exhibit various color patterns on their bodies as they hunt small deep-sea fish about 500 meters (1,640 feet) below the surface of Monterey Bay. Image: © 2009 MBARI

Humboldt squid are formidable predators, whose group foraging often resembles a feeding frenzy. But new research suggests that, as they hunt, these squid communicate with each other using changing patterns of light and dark pigment on their skin. The changes are visible even in the darkest depths of the ocean because the squids’ entire bodies glow in the dark, so the patterns are backlit like words on an e-reader screen.

The research was conducted using video from MBARI’s remotely operated vehicles (ROVs), and was documented in a new paper in the Proceedings of the National Academy of Sciences by MBARI Senior Scientist Bruce Robison and MBARI collaborator Ben Burford. Burford is currently a PhD student at Stanford University’s Hopkins Marine Station.

“I was fascinated by the idea that deep-sea squids have all these complex behaviors, even when they’re in deep water where there’s almost no light,” said Burford. “My goal in this study was to figure out why they were doing these things, and to link these behaviors to an environmental context.” 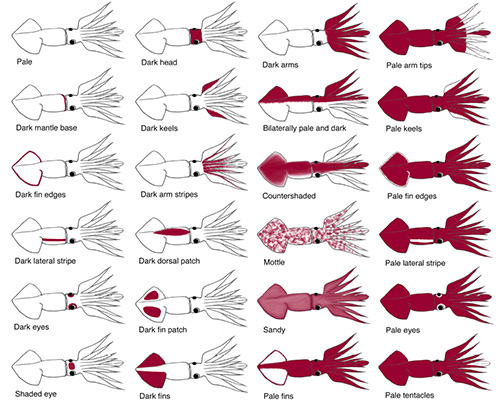 This illustration shows some of the body patterns used by Humboldt squid in Monterey Bay. These patterns were documented by scientists using video from remotely operated vehicles. Image: Courtesy of Ben Burford.

Burford analyzed video from over two dozen ROV dives at depths of 266 to 838 meters (about 870 to 2,750 feet), identifying individual Humboldt squid and taking detailed notes on their behavior. For each squid, he recorded the animal’s movement and body positions as well as the changing color patterns on its body. To provide context for the squid’s behavior, Burford identified whether each squid was swimming by itself, in a small group of squids, or in a large group, and whether or not a squid was in the process of feeding.

Although the squid often used standardized body postures and movements when they were feeding, these appeared whether or not the squids were in groups. This suggests that the postures are specifically related to the process of hunting prey, rather than being a method of communicating with others of the same species. On the other hand, the Humboldt squid exhibited specific color patterns on their bodies mostly when they were interacting with one another in groups.

Based on the ROV observations, Burford and Robison suggest that color changes may be a way for the squids to communicate with one another. For example, a half-light/half-dark pattern that Humboldt squid often exhibit when feeding might be a warning: “Look out—I’m going to grab that lanternfish!” 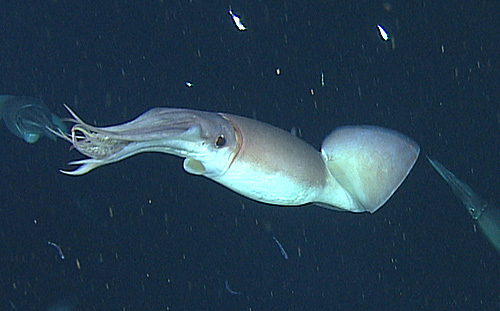 A Humboldt squid displays a “countershading” pattern on its body (dark on top, light underneath) 500 meters (1,640 feet) below the surface of Monterey Bay. Image: © 2009 MBARI

Scientists have observed similar patterns in cuttlefish when two males are trying to intimidate one another. Such antagonistic displays may be particularly important for Humboldt squid because these animals are highly cannibalistic. As Burford explained. “If one squid is weak or vulnerable, the others will often attack it. When we hook a Humboldt squid on a fishing line and try to reel it in, sometimes the other squids will start to eat it, following it all the way to surface.”

However, despite the free-for-all appearance of their feeding frenzies, the researchers noted that foraging Humboldt squid “avoid direct contact or physical competition for prey.” This suggests that their pigmentation changes may be an effective means of communication, analogous to humans using turn signals in traffic.

In addition, the scientists noted that the squids sometimes use patterns in specific sequences, similar to how humans arrange words in a sentence. Due to a small sample size, they were not able to figure out the meanings of these sequences, but they suggest that the squid may use certain patterns to modify the meaning of other patterns, creating what humans call “syntax.” So, for example, one sequence of patterns might mean “Look out!—I’m going to grab that lanternfish,” but a different sequence might mean “Look out!—If you don’t get out of my way, I’m going to eat you!”

Though the meaning of the signals remains unknown, this work suggests that Humboldt squids use changes in body patterns as a consistent and effective means of communication. This finding contradicts a lingering paradigm in marine biology that behavioral signals are uncommon in the deep sea because of lack of light. “It is quite possible that these squids have really sensitive eyes,” said Burford. “But I think it’s also likely that their changing patterns are backlit by their glowing bodies.”

Based on near-surface night-time observations and squid dissections, the authors believe that Humboldt squid can make their entire bodies glow with a yellow-green bioluminescence. Unlike most other glowing animals, however, the glowing organs (photophores) in Humboldt squid are located underneath their skin. The squids’ dark patterns, on the other hand, are created by pigment organs (chromatophores) embedded within the skin itself. This means that the squids’ dark color patterns could mask parts of the squid’s glowing body. 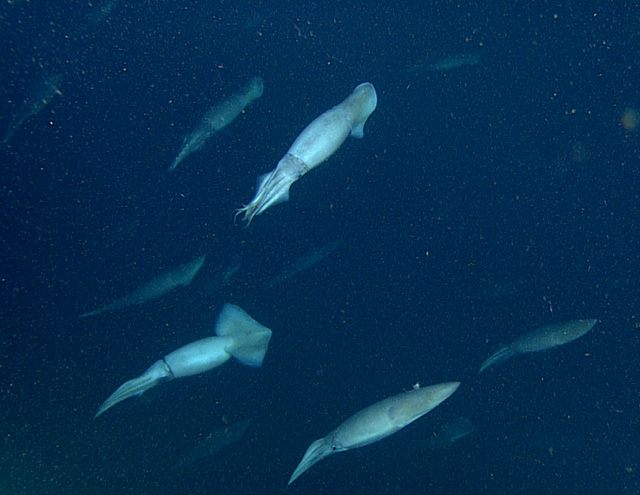 A group of Humboldt squid swim in formation about 200 meters (650 feet) below the surface of Monterey Bay. Image: © 2010 MBARI

If this hypothesis is true, then the squid’s light/dark patterns would be visible both in the dark depths (where they are backlit), and near the surface, where they would be lit up by ambient light. Similar backlighting is used in the display screens on some handheld electronic devices.

Unfortunately, the scientists were not able to see squids glowing in the deep because the standard video cameras on MBARI’s ROVs are not sensitive enough to detect the glow from the squids’ bodies. Newer, more light-sensitive video cameras may be able to show the squids’ glowing bodies and provide additional support for their hypothesis.

Burford concluded, “What I like about this paper is that we’re investigating really basic questions about life in the deep sea. Even though the deep sea is the Earth’s largest habitat, it’s also the least known. So we’re still making a lot of exciting discoveries in natural history and animal behavior.”

MBARI Video about this research:

Stanford University news release about this research:
Stanford researcher investigates how squid communicate in the dark

Jun 18, 2018 – For Cephalopod Week 2018, MBARI takes a look back at some of our most popular web stories featuring this amazing group of animals.
Jan 31, 2018 – A recent paper describes an unusual discovery: dead squid littered across the deep sea bottom.
Mar 27, 2017 - A new paper reveals the first observations of an elusive, giant pelagic octopus with a surprising choice of prey: jellyfish!
Feb 13, 2017 - New research findings highlight a unique visual adaptation in a deep-sea squid, the cockeyed squid, which has eyes that are grossly different in size and structure.