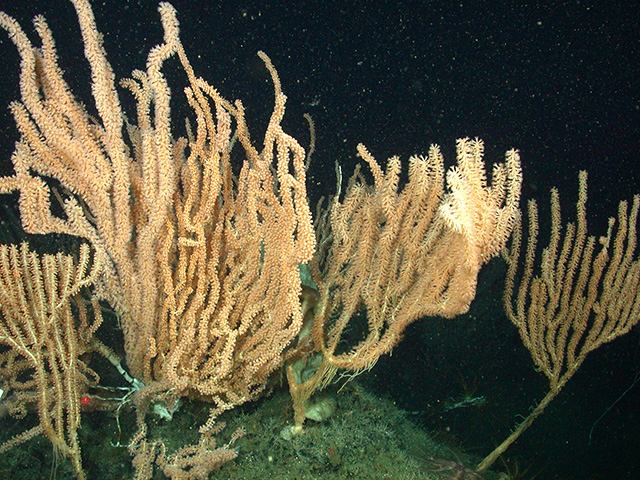 Colonies of the bamboo coral Isidella tentaculum show no signs of bioluminescence when lit by the bright lights of a remotely operated vehicle. Image: © 2007 MBARI

Ever since their first dives in Monterey Canyon 30 years ago, MBARI researchers have marveled at the beauty and diversity of deep-sea corals. A new research paper shows that some of the most common and iconic deep-sea corals can create their own light. Some can even release glowing slime.

Most deep-sea corals are part of a group of animals called octocorals, which includes sea pens and bamboo corals. The familiar stony corals found on shallow tropical reefs are in a separate group (hexacorals), and do not generally make their own light.

When disturbed, colonies of the bamboo coral Isidella tentaculum glow in the dark. Image: © 2020 MBARI

The poster child for glowing octocorals is the sea pansy, a shallow-water sea pen in the genus Renilla. Genes from this animal are commonly used to create a compound called “green fluorescent protein” (GFP) that has many uses in biomedical research. Scientists have spent a lot of time analyzing the genes and proteins that Renilla uses to create light, including a key enzyme known as luciferase. But they know relatively little about the biochemistry of other glowing octocorals, especially those that live in the deep sea.

As part of an ongoing effort to understand the evolution of bioluminescence, MBARI Senior Scientist Steve Haddock and postdoctoral fellow Manabu Bessho-Uehara (now at Nagoya University in Japan) videotaped and collected specimens of nine different deep-sea corals and sea pens and found that all were able to make their own light.

Haddock and Bessho-Uehara wanted to find out if different groups of deep-sea corals used similar biochemical processes as Renilla to make light, or if they had evolved different processes. Their first step was to figure out which deep-sea corals were bioluminescent.

The researchers worked with ROV Pilot Ben Erwin and Engineer Dave French to outfit MBARI’s remotely operated vehicle (ROV) Doc Ricketts with an extremely light-sensitive video camera that the scientists typically only use in the lab. Then the team sent the ROV down to the seafloor to look for glowing animals. Since many animals only glow when disturbed, the researchers videotaped corals while gently touching or shaking them using the manipulator arm on the ROV.

Using the ROV, the scientists carefully collected pieces of each type of coral and brought them back to the surface alive. Then they videotaped the animals in a darkened cold room on board the research vessel Western Flyer. The scientists tested each animal’s ability to glow by physically touching it, and measured the wavelengths (colors) of the light produced. Working with Warren Francis (now a postdoctoral fellow at the University of Southern Denmark), the researchers also analyzed the animals’ DNA to look for genes that might be used to create these glowing chemicals.

The researchers were surprised to discover that all of the corals they collected were able to make their own light. They also discovered several groups of corals not previously known to glow.

The researchers collected and studied five different types of sea pens, all of which produced bioluminescence. One sea pen in the genus Funiculina emitted blue light when the stalk or polyps were disturbed. The four other sea pens produced green light at wavelengths that suggested they were using green fluorescent protein. The sea pen Distichoptilum gracile not only produced waves of bright green light, but also released a glowing green slime. 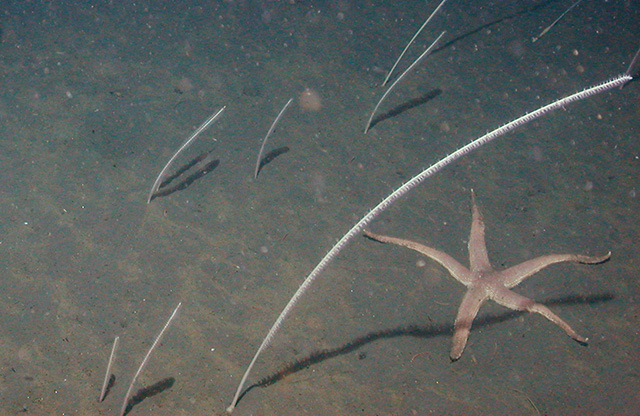 Sea pens in the genus Halipteris often grow in groups on the muddy seafloor. Image: © 2003 MBARI

Another sea pen in the genus Kophobelemnon had distinct glowing green spots between its tentacles.  This is the first species in this genus known to glow. Living at a depth of almost 4,000 meters, it may be the deepest animal known to use green fluorescent protein to change the color of its bioluminescence.

The researchers also discovered that one of the largest and most iconic deep-sea corals, the bubblegum coral Paragorgia arborea, produces blue light when disturbed. This is the first time any coral in the large group known as Scleraxonia has been shown to glow.

In addition to the deep-sea corals, the researchers also examined a flytrap anemone—a bright orange deep-sea anemone that grows to nearly a foot across. They discovered that this animal can emit a cloud of brightly glowing blue slime from its mouth (located in the center of its circular body). 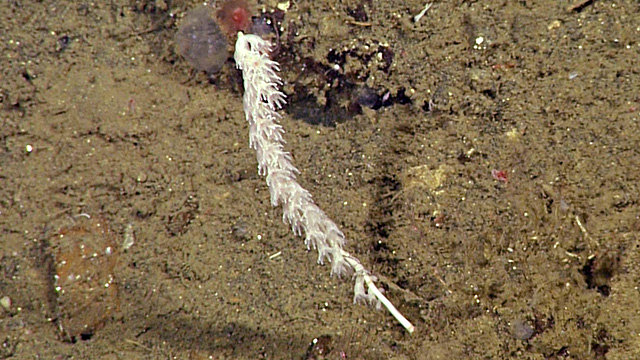 Illuminated by the lights of the ROV, bamboo corals in the genus Lepidisis typically appear pale in color. Image: © 2014 MBARI

Like many deep-sea corals, this bamboo coral in the genus Lepidisis emits waves of blue light when disturbed. Image: © 2020 MBARI.

Although coelenterazine produces blue light, many of the sea pens described in this study give off a greenish glow. This is because the bodies of sea pens also contain green fluorescent protein (GFP) similar to that found in Renilla sea pansies. GFP absorbs the blue light produced by the luciferin-luciferase reaction and re-emits it as green light (analogous to how the ink on a black-light poster absorbs ultraviolet light and re-emits it as visible light). GFP is found in a number of corals and jellies of various kinds, which suggests the compound evolved a very long time ago.

Because all the octocorals studied use similar chemistry (coelenterazine and Renilla-type luciferase) to produce light, the researchers suggest that this large group may have evolved from a common glowing ancestor, 400 to 500 million years ago. As Bessho-Uehara put it, “This finding makes me imagine a deep-sea area in an ancestral ocean where any octocoral you touched would emit light.”

The flytrap anemone appears to produce light using a different type of luciferase, and probably evolved its blue glowing slime independently of the octocorals. However, this anemone does use coelenterazine to react with its luciferase, as do all the other glowing corals and jellies known.

The authors of the recent paper can’t say exactly why corals evolved the ability to glow, but they have some hypotheses.

Several sea pens and corals emit waves of glowing light that travel across their bodies, as do some brittle stars, sea cucumbers, and even comb jellies. The researchers suggest that these waves of glowing light could confuse potential predators or attract larger animals that might eat the animal trying to eat the coral. Marine biologists call this the “burglar alarm effect.”

Several corals and the flytrap anemone documented in this study released glowing slime, a trait shared by many other deep-sea animals, including comb jellies, medusae (jellyfish), midwater worms, and the vampire squid. The researchers suspect that such slime might stick to the body of a potential predator, once again making it vulnerable to attack from larger animals. 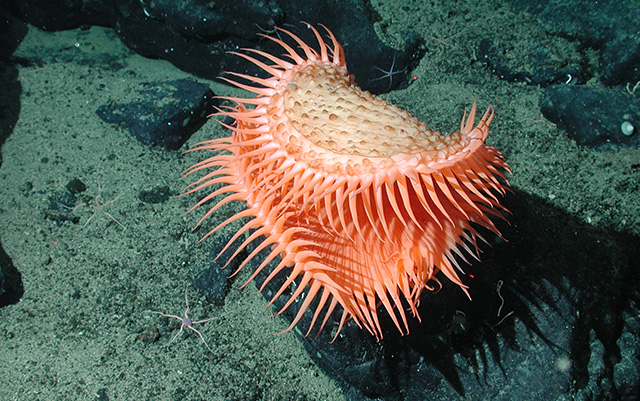 The scientists are still trying to understand why some corals evolved to glow blue while others use GFP to make green light instead. Of the animals examined in this study, the ones that glowed blue lived in shallower water (1,200 meters), while those that glowed green (using GFP) lived in relatively deep water (3,200 meters).

Implications for science and industry

This paper shows that many deep-sea corals can produce their own light, and suggests that they inherited this ability from a common ancestor. However scientists are still working out the complex evolutionary history and relationships among corals, as well as the genes involved in making light. As Bessho-Uehara put it, “One of the next questions we would like to answer is why so many octocorals are not luminous, if their ancestor was luminous.”

Bessho-Uehara continued, “There could be a lot of bioluminescent corals in the deep-sea that we haven’t discovered yet. This study shows how important bioluminescence is to many deep-sea animals. It also suggests that activities such as deep-sea mining, which reduce visibility near the seafloor, could affect deep-sea ecosystems in ways we might not expect.”

The research could also have commercial applications. It sets the stage for genomic and biochemical studies that could reveal the details how the different coral bioluminescent systems work. This, in turn, could help scientists isolate new glowing compounds—like GFP—for use in the life sciences.

As Bessho-Uehara noted, “Renilla luciferase is the only type of luciferase from corals and their relatives that is well-characterized. But we described other types of luciferase from a variety of species, some of which showed unique behaviors. For example, the luciferase of one sea pen we studied is sensitive to calcium ions, which are involved in nearly every aspect of cellular biology.”

Reflecting on the work, Haddock said, “No matter what branch of the tree of life we explore, we find fascinating patterns in the evolution of bioluminescence, and surprising variations in the genes and chemicals that animals use to make light. We also find more evidence that bioluminescence is truly a key means of communication for many marine animals.”

July 13, 2020 – A new research paper shows that some of the most common and iconic deep-sea corals can create their own light.
March 23, 2020 – Humboldt squid communicate with each other using changing patterns of light and dark pigment in their skin.
October 17, 2019 – MBARI researchers recently found that animals living on the deep seafloor are much less likely to produce light than those swimming or drifting in the “midwater.”
March 6, 2019 – Scientists at MBARI recently found a way to identify several groups of glowing marine organisms by the light they produce.