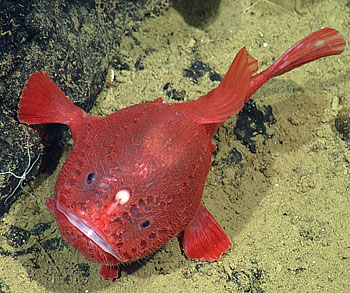 MBARI researchers videotaped the little anglerfish Chaunacops coloratus on several seamounts off the Central California coast. The fish typically lurks in soft-sediment areas at the edges of lava flows. On the fish’s head is a light-colored “esca” that functions as a fishing lure. Image © 2010 MBARI

“One fish, two fish, red fish, blue fish”—with a bulbous body and spiky scales, a shaggy lure dangling from its head, and foot-like fins that it uses to “walk” along the seafloor, the deep-sea anglerfish Chaunacops coloratus looks like something out of a Dr. Seuss book. In a recent paper, MBARI researcher Lonny Lundsten and his coauthors describe the first observations of these rare fish in their natural, deep-sea habitat. In addition to documenting these fish walking on the seafloor and fishing with their built-in lures, the researchers discovered that the fish change color from blue to red as they get older.

C. coloratus was first described from a single specimen collected off the coast of Panama during an expedition in 1891 aboard the U.S. Fish Commission steamer Albatross. However, for over 100 years, marine researchers collected deep-sea fish using trawl nets and dredges, so this anglerfish was never seen alive. That changed in 2002, when researchers from MBARI, Moss Landing Marine Laboratories, and the Monterey Bay National Marine Sanctuary used the remotely operated vehicle (ROV) Tiburon to explore Davidson Seamount—an extinct volcano off the coast of Central California.

When the researchers first spotted this fish on video from the ROV, they weren’t exactly sure what kind of fish it was. Although C. coloratus had been dredged from deep-sea environments in other ocean basins, it had never been seen in the north Pacific. After the cruise, the researchers recruited ichthyologists from California Academy of Sciences and elsewhere to help them identify the fish.

Then, in 2010, MBARI researchers observed six more of these unique fish during ROV dives at Taney Seamounts, another set of extinct volcanoes off the California coast. This time, the research team noticed that not all of the fish were red or rose-colored, as they had previously been described in the scientific literature. Instead, some of the fish were blue.

After comparing the sizes of the fish in ROV videos, the scientists noted that the red fish were larger and more mature, while the blue fish were younger and smaller. From these observations, they inferred that this fish likely begins its life in a transparent larval form, turns blue as a juvenile, and turns red at adulthood. 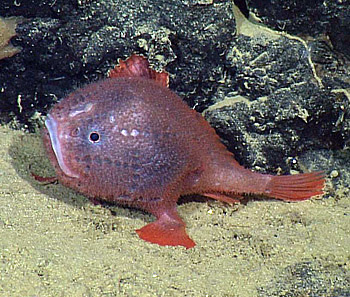 Although marine biologists previously believed this fish to be pink or orange in color, MBARI researchers observed that smaller, younger fish like this one were bluish in color. Image © 2010 MBARI

One of the remarkable traits of all anglerfish is their ability to attract prey using parts of their bodies that function as lures. During one ROV dive, the researchers observed C. coloratus deploying a shaggy, mop-like lure, called an esca, which it dangled from the end of a modified fin near the top of its head. After an unsuccessful attempt at attracting prey, the anglerfish then stowed its fishing gear away in a special cavity located between its eyes.

In addition to witnessing the anglerfish using its ”fishing lure” Lundsten and his colleagues also watched C. coloratus move across the seafloor in a manner akin to walking. This behavior is common among C. coloratus’ shallow-water relatives, the frogfish, but had not been observed in C. coloratus. Scientists speculate that ‘walking’ is more energy efficient than swimming short distances, and that it also disturbs the surrounding seawater less, reducing the chances of startling nearby prey.

Given the great depths these fish inhabit, it is no surprise that they had never before been seen alive. It is also a testament to the usefulness of ROVs, which have provided marine scientists with a new window into the deep sea. MBARI has pioneered the use of ROVs to study animals in the midwater and on the deep seafloor, discovering new species, observing animals that have never been seen before, documenting previously unknown behaviors, and collecting individuals in their native habitat. 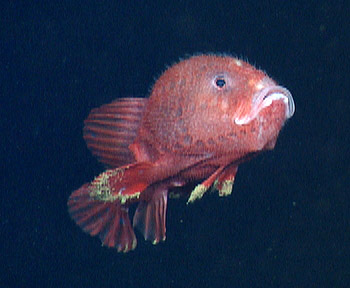 MBARI researchers observed, for the first time, that Chaunacops coloratus will leave the seafloor and swim up into the water column. However, they are not sure if this is an escape response or a possible hunting strategy. Image © 2010 MBARI

Lundsten hopes that future observations of this fish in its native habitat, along with additional examination of the collected specimens and genetic data, may reveal more information about these unusual animals. As with many deep-sea creatures, we still know very little about the basic biology of C. coloratus, such as what it eats, how it reproduces, and how long it lives. Future studies may also reveal whether they (like other anglerfish) use bioluminescent lures, and how the individuals collected off California are related to those found in other parts of the ocean.

Lundsten says, “when you find something as rare as this little fish, it is important to clearly document what you can… and then make the information available so that other current and future researchers have access to the samples and information derived from the samples.” To that end, MBARI scientists published their detailed observations of C. coloratus and deposited the specimens they collected in a reference collection at the California Academy of Sciences. They also archived molecular data on the fish, including gene sequences, in GenBank, a comprehensive international scientific database of DNA information.

In our ongoing efforts to understand the world’s ocean, every little piece counts. One fish, two fish—the little pieces add up to a larger whole. They can also stimulate our sense of wonder. As Lundsten says, “I’m curious about the world, and have a desire to make a contribution to our understanding of it, even if it’s just adding a little more information about a little fish that most people will never see. In the end, you hope to inspire other people to do the same, especially kids.”

January 16, 2020 – Little red jellies are commonplace near the deep seafloor in Monterey Bay. Now scientists are finding that their evolution and relationships to one another are probably incorrect.
December 12, 2018 – Marine biologists recently discovered five new species of colorful nudibranchs on the deep seafloor offshore of California and Baja California.
June 5, 2018 – In honor of World Oceans Day, MBARI researchers highlight the discovery of over 200 deep-sea animal species over the last 30 years.
Researcher