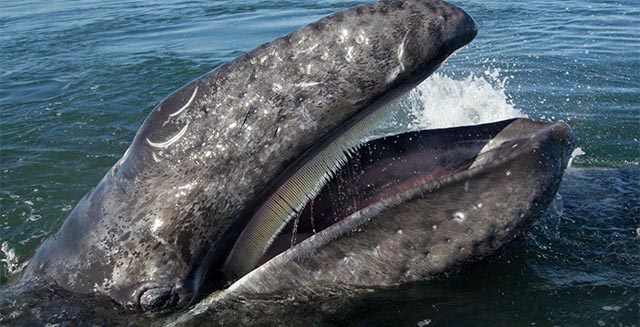 A gray whale at the ocean surface. Photo by Knute Brekke.

In the first six months of this year, at least 167 North Pacific gray whales—many of them emaciated—have washed ashore dead from Mexico to Alaska. Scientists believe many more have died but their carcasses sank to the seafloor so they cannot be counted. The National Oceanic and Atmospheric Administration has declared an “unusual mortality event” which is defined as a stranding that is unexpected; involves a significant die-off of any marine mammal population; and demands immediate response.

Such a large die-off can be indicative of ocean health, which in turn affects human health. Scientists are looking at different factors that may play a role in the gray whale deaths, including ocean temperature, food availability, entanglement in fishing gear, marine pollution, toxic algae blooms, collisions with large ships, the extent of sea ice, and predation by killer whales.

Scientists at MBARI and the Monterey Bay National Marine Sanctuary are contributing to the investigation by focusing on the sounds picked up by a hydrophone 900 meters (almost 3,000 feet) deep in Monterey Bay. This underwater microphone allows  researchers to monitor changes in marine mammal communication as a way to learn about change in their populations and migration. One potential factor is the climate change that is touching every part of the ocean, including Monterey Bay. Temperatures are warmer, there is less oxygen in the water, and the sea has become more acidic.

MBARI scientists Heidi Cullen and John Ryan, together with the sanctuary’s chief scientist, Andrew DeVogelaere, published a column in the New York Times to alert readers to the plight of the gray whales and changes in the ocean that may be leading to their die off, and to call attention to the urgency of protecting the health of the ocean. One example they give is supporting the creation of more marine protected areas like the Monterey Bay National Marine Sanctuary. These underwater habitats rival the beauty of national parks like Yellowstone and the Grand Canyon. These places are part of the new global Ocean Climate Action Agenda because they are strongholds of biodiversity that provide resilience against threats like climate change.