Diving into the Sargasso Sea

The Sargasso Sea is an ocean within an ocean, bounded not by land masses but by a vortex of swirling ocean currents—a place where mats of seaweed drift on the high seas and shelter a unique community of open ocean animals. From February 6 to February 26, 2011, a research team from the Monterey Bay Aquarium Research Institute will explore this one-of-a-kind habitat. The public can follow the day-by-day progress of this exciting mid-ocean expedition from MBARI’s Sargasso Sea Expedition web site. 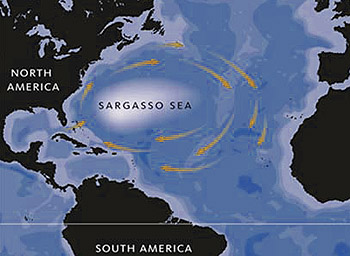 This map shows the Sargasso Sea, bounded by the encircling currents of the North Atlantic Gyre. Image: US Fish and Wildlife Service

The team will be using the Lone Ranger, a unique, 78-meter (255-foot) research vessel owned and operated by the Schmidt Ocean Institute. From January 11 to 28, 2011, the Lone Ranger traveled from the Canary Islands to Bermuda on the first leg of this, its maiden research cruise. During the second leg of the cruise, the Lone Ranger will cross the Sargasso Sea from north to south, eventually coming to port in the Bahamas.

Leading the research team are MBARI ecologist Ken Smith and engineer Alana Sherman. They are interested in studying not only the animals that live at the surface of the Sargasso Sea, but also those that live on the deep seafloor, thousands of meters below. Accompanying Smith are an interdisciplinary team, including MBARI technician Jake Ellena and ROV pilot and engineer Dale Graves. Other key researchers include marine ecologist Kathleen Sullivan Sealey from the University of Miami and Jeff Drazen, a deep-sea fish expert from the University of Hawaii. Cruise participants will collect samples for Schmidt Ocean Institute postdoctoral fellow Dan Barshis’ genetic studies of animals associated with floating Sargassum seaweed.

Near the sea surface, the researchers will study the communities of fish, shrimp, crabs, worms, and snails that make the Sargassum, a brown alga, their home. Smith suspects that rising sea surface temperatures and ocean acidification could be altering these communities. One of Smith’s objectives is to follow up on previous studies of these communities that he performed in the Sargasso Sea over 30 years ago. By conducting similar studies during the Lone Ranger cruise, Smith hopes to determine whether animal communities associated with Sargassum have changed over the last three decades. 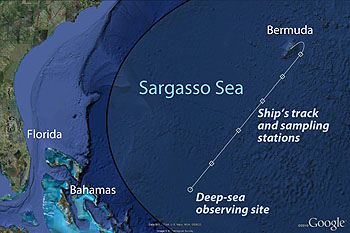 This map shows the approximate path to be taken by the Schmidt Ocean Institute research vessel Lone Ranger during the Sargasso Sea cruise. The ship will start in Bermuda and head southwest. Each dot indicates a sampling station. Image © 2011 MBARI

At six different points within the Sargasso Sea (see map), Smith and his team will go snorkeling in the open ocean and use dip nets to collect samples of animals and Sargassum seaweed. They will also use a small robotic submersible to videotape the deeper portions of the floating Sargassum mats and to make water-quality measurements. These observations will help the team to determine what species are present and how many animals exist as part of this unique community.

The team’s second objective is to study animals that live on the deep seafloor. At each of the six study sites in the Sargasso Sea, Drazen will lower baited cameras to the seafloor. These cameras will record the deep-sea fish and other animals that are attracted to the bait over a 24-hour period. 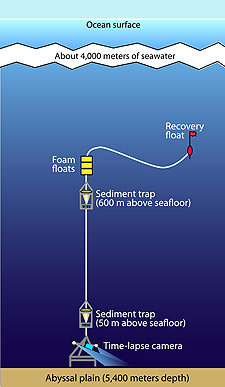 This simplified diagram (not to scale) shows key components of the deep-sea observing system to be installed at the southernmost sampling station of the Sargasso Sea cruise. Image © 2011 MBARI

At the most southerly study site, about 500 miles west of Bermuda, Smith will also set up a long-term observing system 5,400 meters down on the abyssal seafloor. Smith has conducted a similar series of deep-sea studies off the coast of California for over 20 years.

The new observatory, commissioned by the Marine Science and Technology Foundation, consists of a time-lapse camera system connected to a string of “sediment traps” (see diagram). The time-lapse camera will snap pictures of a four-by-five-meter patch of ocean floor every hour for up to six months. Smith will retrieve the data from the observatory on a separate cruise scheduled for August.

Sediment traps are large funnels that collect particles of debris that rain down from sunlit surface waters. This rain of debris is the primary source of food for deep-sea communities. By measuring how much debris sinks into the traps, researchers can figure out how the food supply for deep-sea animals changes over time.

Previous studies of abyssal animals in the eastern North Pacific and eastern North Atlantic demonstrated that climate change is affecting sea life at depths previously thought to be insulated from such things. Smith wants to study additional deep-seafloor areas to better understand how these effects vary from one part of the ocean to another on a global scale.

Researchers have already observed changes in the surface waters of the Sargasso Sea, including increased temperature, changes in current patterns, and increased stratification of surface waters. Smith hopes his expedition will determine how these changes are affecting the animals that live in this unique habitat.

The public is invited to follow the day-by-day progress of the Sargasso Sea Expedition on the team’s expedition log.

May 12, 2014 – Amy Zimmerman, a postdoctoral fellow at MBARI, recently conducted field experiments to study the interactions between viruses and nutrients in the ocean. She traveled to the Sargasso Sea (in the North Atlantic Ocean) to investigate how these interactions impact picophytoplankton, the smallest community of phytoplankton.
Jan 30, 2012 – On January 30, 2012, a group of researchers led by MBARI marine biologist Ken Smith and engineer Alana Sherman left Bermuda and sailed south into the Sargasso Sea. This is Smith's third research expedition to this region using the research vessel Lone Ranger, operated by the Schmidt Ocean Institute.
The Sargasso Sea is an ocean within an ocean, bounded not by land masses but by a vortex of swirling ocean currents—a place where mats of seaweed drift on the high seas and shelter a unique community of open ocean animals.