Deep-sea vent animals not as isolated as they seem 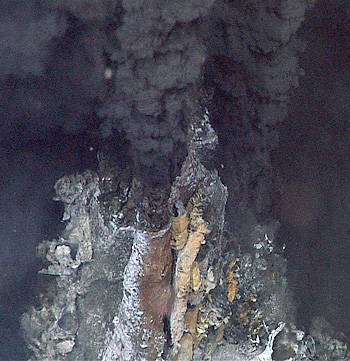 Deep-sea hydrothermal vents, such as this one in the Gulf of California, seem like primeval habitats, isolated from events on land or at the sea surface. However, ancient fossilized vent sites appear to have been colonized by different species of animals than the ones that scientists see at vents today. Image: ©2012 MBARI

Miles below the ocean surface, diverse ecosystems flourish at hydrothermal vents. Without sunlight, animals live off of bacteria that thrive on chemicals billowing out of the Earth’s crust. These strange communities appear entirely detached from life on land. However, new research from MBARI biologist Bob Vrijenhoek suggests that vent ecosystems might be more sensitive to global environmental change than scientists originally thought.

When researchers first discovered hydrothermal vents in 1977, many speculated that vent animals could be “living fossils” that hadn’t changed much for hundreds of millions of years. If these odd creatures were as isolated from outside pressures as they appeared to be, scientists theorized, then they may never have needed to evolve.

Vrijenhoek, who has studied the evolution of vent animals for more than two decades, believes otherwise.

“Sometimes there are these charismatic stories that develop a life of their own,” Vrijenhoek said. “Even if they are based on flimsy evidence… the myth lives on.”

Scientists have debated this “antiquity hypothesis” since the late 1970s. In recent years, it has slowly lost credibility, due in part to Vrijenhoek’s research. His most recent work shows that new species of common vent animals—including worms, mussels, and snails—evolved around the same time as catastrophic environmental events that affected life on land and in the upper ocean. The mass extinction that killed off the dinosaurs roughly 65 million years ago, for example, as well as a drastic warming event roughly 55 million years ago, both appear to have coincided with the onset of new vent species, Vrijenhoek reported in a December 2012 paper in Deep-Sea Research II. 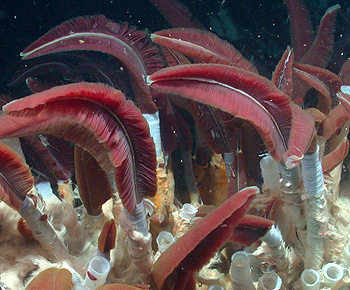 Giant tubeworms such these as have evolved to live at the boundary between oxygen-poor vent fluids and oxygen-rich seawater. If past catastrophic global environmental changes caused the deep seawater to become oxygen-poor, these worms would have had to adapt, evolve, or die off and be replaced by other animals. Image: ©2003 MBARI

“We can’t assume that these things are protected from what’s happening at the surface of the planet,” said Vrijenhoek. “They are every bit as susceptible as the surface organisms.”

One cause for this vulnerability is their reliance on bacteria to convert vent chemicals into food. This process, called chemosynthesis, calls for particular ocean chemical conditions, including a distinct boundary between oxygen-rich and oxygen-poor water. Vrijenhoek suggests that extreme global environmental changes could have shifted global ocean chemistry enough to disrupt chemosynthesis, even on the deep seafloor.

“If you look at one of these worms, 60 to 70 percent of its mass is bacteria,” said Vrijenhoek. “There’s more bacteria than there is worm. If you change the [chemical] nature of that zone, you’re basically going to knock [the bacteria] out.”

To assess whether global events have perturbed vent ecosystems through time, Vrijenhoek analyzed evolutionary evidence from modern and fossilized animals. Though he used the most sophisticated statistical methods available, these analyses are inherently prone to errors. Fossil remains, for example, are often damaged and difficult to identify.

“When you take a snail and reduce it to something that looks like nothing more than a tiny Chinese hat, there’s not a lot of morphology left,” said Vrijenhoek. “They have converged on these very simple body plans.” 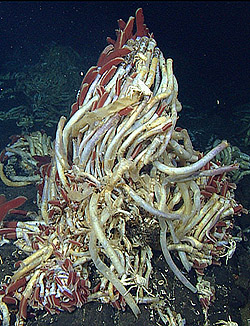 After studying fossilized vent communities and analyzing DNA from modern vent animals, molecular ecologist Bob Vrijenhoek came to the conclusion that most of the species at modern deep-sea vents first appeared within the last 60 million years, rather than hundreds of millions of years ago, as was previously believed. Image: ©2012 MBARI

Researchers must also consider that older fossils may exist, but have not been studied, and that some vent animals may not have been preserved in the rock record at all. Evolutionary ages based on fossils, therefore, carry large margins of error.

Another way scientists track evolution is by identifying differences in DNA between two closely related modern species. Researchers have developed calculations to estimate how long each change in DNA takes to arise in different species, providing a rough estimate of the time that has passed since related species diverged from a common ancestor.

Vrijenhoek used such “molecular clocks” to show that many modern vent animals have changed significantly since the first vent animals arose 500 million years ago.

“No matter how hard we work on the molecular clocks,” Vrijenhoek said, “we can’t think of any way that most of these lineages of vent animals are more than 60 million years old.”

Vrijenhoek plans to continue collecting samples from new vent fields to confirm his evidence against the antiquity hypothesis. For now, his results suggest that the families of modern vent animals might be ancient by human standards, but are relatively young in the scheme of Earth’s long and tumultuous history.