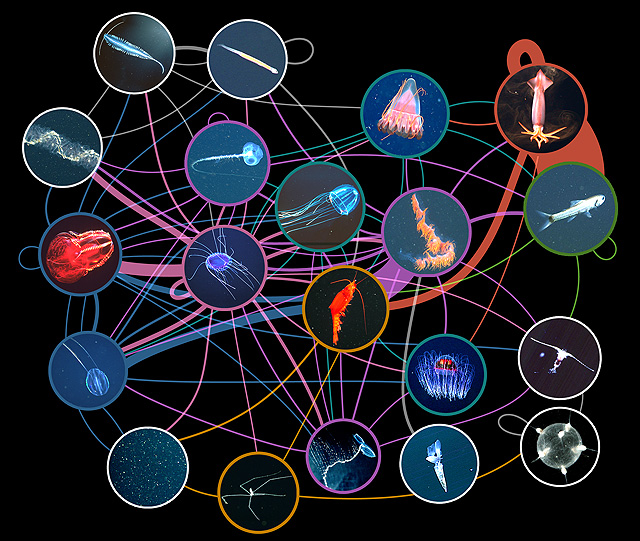 Deep-sea animals have been systematically studied for over 100 years, yet scientists are still learning about what many of these animals eat. A new paper by MBARI researchers Anela Choy, Steve Haddock, and Bruce Robison documents the first comprehensive study of deep-sea food webs, using hundreds of video observations of animals caught in the act of feeding off the Central California coast. The study shows that deep-sea jellies are key predators, and provides new information on how deep-sea animals interact with life near the ocean surface. 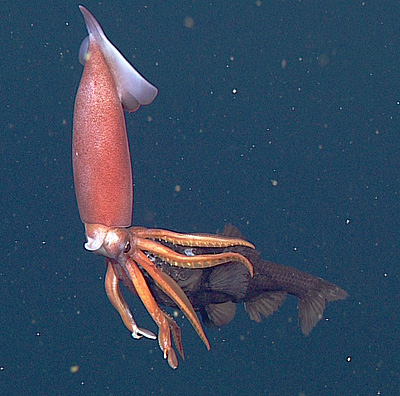 This image of a gonatid squid eating a deep-sea fish illustrates the old theory that squids and fishes (animals that are easily caught in nets) are the dominant predators in deep-sea food webs. New research shows that gelatinous animals are just as important. Image: © MBARI

To use these methods, scientists must collect large numbers of animals—something that is difficult to do in the deep sea. In addition, soft-bodied, gelatinous animals decompose rapidly after being eaten and are often damaged or destroyed when they are collected using trawls or large nets.

The MBARI researchers took an entirely new, but relatively straightforward approach to this problem: they used deep-diving vehicles to observe animals feeding on one another in the deep sea. As Robison pointed out, “This direct approach has never been used systematically before. Unlike other methods, it involves no guesswork and provides very precise information about who eats whom in the deep sea.”

Since the late 1980s, MBARI researchers have used remotely operated vehicles (ROVs)—underwater robots operated from a ship at the surface—to study deep-sea animals in their own environment. In the process, MBARI has amassed over 23,000 hours of deep-sea video footage. 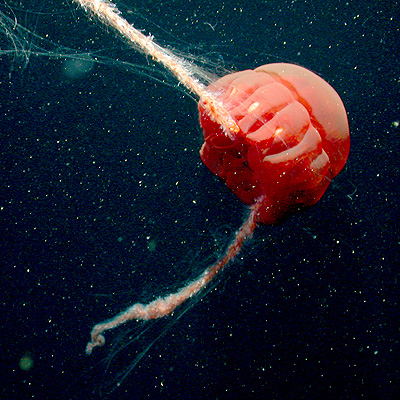 This photograph illustrates the importance of jellies in deep-sea food webs. In this case, a red medusa is eating another kind of jelly called a siphonophore. Image: © 2003 MBARI

What makes this footage particularly useful is that technicians in the MBARI Video Lab have painstakingly analyzed virtually every minute of every deep ROV dive, identifying animals and their behaviors, and entering this information into MBARI’s immense Video Annotation and Reference System (VARS) database.

Combing through the VARS database, MBARI Postdoctoral Fellow Anela Choy and her coauthors discovered almost 750 different video observations of animals eating one another.

“When I first came to MBARI, I was excited to see how our understanding of food webs might change as a result of making direct observations of deep-sea life using an ROV,” Choy commented. “The most surprising thing to me was how important gelatinous animals were as predators, and how their unexpectedly complex food habits spanned the entire food web. Who would have thought that a deep-sea jelly that looks like a big dinner plate would eat 22 different types of animals?” 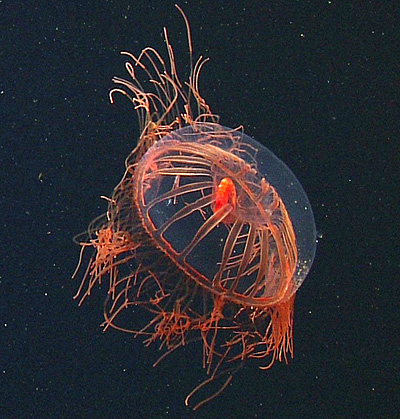 This photograph shows a medusa jelly that has eaten a red mysid shrimp. Because many deep-sea animals have transparent bodies, researchers can sometimes identify prey even after they have been ingested. Image: © MBARI

She continued, “Our video footage shows that jellies are definitely not the dietary “dead ends” we once thought. As key predators, they could have just as much impact as large fishes and squids in the deep sea!”

In fact, even when the researchers tallied just the animals they saw eating within 200 meters (660 feet) of the sea surface, the most common predators were not fishes or squids, but siphonophores—relatives of Portuguese man-of-war. Some large siphonophores create living drift nets up to 30 meters long, and were observed snagging a wide variety of animals, including copepods, krill, ctenophores, medusae, and small to medium-sized fishes.

Conversely, a small but extremely common siphonophore, Nanomia bijuga, turned out to be a specialist, eating almost nothing except krill. It is essentially competing with blue whales for food.

As these examples suggest, jelly food webs encompass not just deep-sea animals, but also animals that live near the sea surface. Gelatinous animals have been found in the stomachs of animals ranging from penguins and albatrosses to well-known jelly eaters such as Mola mola (ocean sunfish) and leatherback sea turtles.

As Haddock noted, “There is a misconception that jellies are merely a nuisance and serve no real purpose in marine ecosystems. Our results and other studies around the world show that they are a common source of food for a diverse group of predators. Interactions involving gelatinous predators and prey create most of the complexity that we see in our new deep-sea food web.” 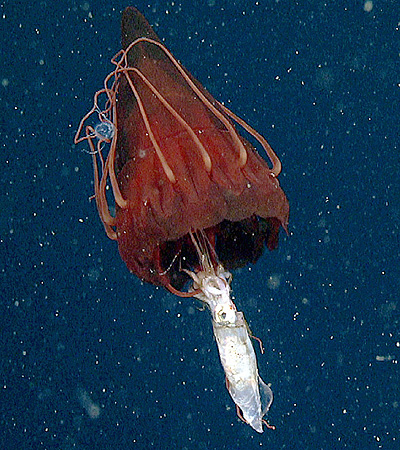 This helmet jelly has caught two different kinds of prey: a gonatid squid (below) and a small medusa (at upper left). Image: © MBARI

ROV surveys provide a very different perspective on deep-sea food webs from the other research methods. However, as Haddock explained, “Our results don’t replace the traditional ideas of a food web, but complement them. It’s as if we had a transportation map that only showed train tracks, but now we can see the rest of the roads and paths.”

This study serves as a reminder not just that marine food webs are extremely complex, but also that many deep-sea animals are eaten by animals near the ocean surface. According to the recent paper, deep-sea animals “form the principal forage base for many commercially-important meso-predators and apex species, such as marine mammals, sea birds, and tunas.” In other words, if you eat a tuna sandwich for lunch, you too might be part of a deep-sea food web.

July 8, 2020 – A new study argues that deep-sea mining poses significant risks not only to seafloor ecosystems, but also to animals in the vast midwater realm.
March 17, 2020 – Scientists analyze the threats faced by deep-sea animals that migrate vertically each day.
January 16, 2020 – Little red jellies are commonplace near the deep seafloor in Monterey Bay. Now scientists are finding that their evolution and relationships to one another are probably incorrect.