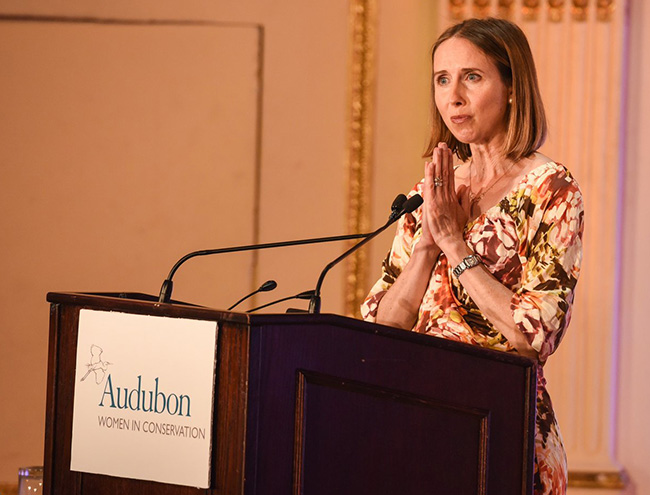 MBARI Director of Communications and Strategic Initiatives Heidi Cullen has received the 2019 Friend of the Planet award from the National Center for Science Education. The organization presents the award annually to recognize individuals who have made outstanding contributions to the advancement of the organization’s goal of defending the teaching of evolution and climate science.

An engineer and climate scientist by training, Cullen transitioned to science communication and co-founded Climate Central, a research and journalism non-profit organization focused on highlighting the impacts of climate change. Before that she served as The Weather Channel’s first on-camera climate expert where she helped launch a weekly hour-long TV series on climate science and sustainability. Prior to that, Cullen worked as a research scientist at the National Center for Atmospheric Research in Boulder, Colorado.

Since joining MBARI in February of 2018, Cullen has been focused on raising MBARI’s profile, strengthening the culture of outreach within the institution, and working with the Video Laboratory on a strategy for managing the pressing challenges of an ever-increasing stream of data.

Cullen serves on the National Academy of Sciences Board on Atmospheric Science and Climate and is also Chief Science Advisor for the Emmy award-winning The Years Project .  She served on the NOAA Science Advisory Board from 2008 to 2014. She is the author of The Weather of the Future published by Harper Collins in 2010. Cullen received a Bachelor of Science degree in Industrial Engineering from Columbia University and went on to receive a Ph.D. in climatology and ocean-atmosphere dynamics at the Lamont-Doherty Earth Observatory of Columbia University. In 2017, Cullen received the National Audubon Society’s Rachel Carson Award for her work as a science communicator.