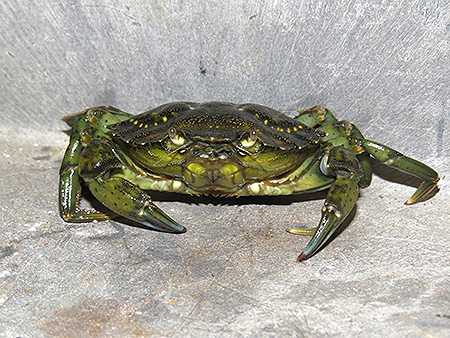 As humans release more and more carbon dioxide into the atmosphere, the gas is dissolving into the ocean, making seawater more acidic. This threatens the growth and survival of animals such as some corals and snails, whose skeletons and shells may become thinner under more acidic conditions.

But ocean acidification can have more subtle consequences, such as affecting animal behavior and the relationships between predators and prey. Researchers in Senior Scientist Jim Barry’s lab at MBARI have been studying these effects in the institute’s state-of-the-art seawater lab. They recently published a paper showing how ocean acidification makes some snails more susceptible to being eaten by invasive (and predatory) green crabs.

The study, published in early May 2019 in the journal Marine Ecology Progress Series, involved placing green crabs in containers with three different species of marine snails, and exposing the animals to seawater at different temperatures and levels of acidity. The idea was to simulate ocean conditions expected over the next 50 to 100 years. The experiments were conducted by Joshua Lord when he was an MBARI postdoctoral fellow, with assistance from Barry, as well as from Elizabeth Harper of Cambridge University.

The snails used in these experiments have shells made of two different minerals–calcite and aragonite. Two of the snail species used in the experiment had thick shells made of calcite, while the third species had thinner shells made of aragonite. Aragonite is stronger in proportion to its weight  but is more sensitive to ocean acidity, and will dissolve more quickly than calcite under expected future ocean conditions.

Small changes in water temperature had little effect on the animals or their behavior. However, the snails with aragonite shells did not survive as well as the other two species in more acidic seawater. In fact, by the end of the five-month experiment, their shells had begun to visibly erode away. The snails with thicker shells, however, seemed better adapted to survival under more acidic conditions. 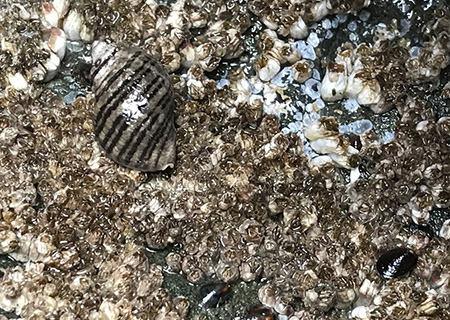 Striped dogwinkles (Nucella ostrina) are common along the Central California coast. MBARI research indicates that their shells may be susceptible to damage as the ocean becomes more acidic. Image by Aaron Liston/Wikimedia CC BY-SA 4.0

Based on previous research, the scientists speculated that the snails might develop thicker shells over time in response to the presence of the predatory crabs. In fact, the shells of the snails with calcite shells became much thicker when they were exposed to crabs under current ocean conditions, giving the snails more protection from an aggressive predator. However, when these same snails were exposed to crabs in more acidic seawater, their shells did not thicken as much.

On the other hand, the shells of snails with thin, aragonite shells actually became thinner over time, due to the chemistry of the seawater. This suggests that snails with aragonite shells would be much more likely to be eaten by predatory crabs as the ocean becomes more acidic.

Unfortunately for the snails, the predatory crabs did not seem to be affected by changes in ocean acidity. Green crabs are an invasive species on the US West Coast, and the expansion of their range could have significant effects on native snails. This experiment showed that the effects of these crabs will vary depending on what these snails’ shells are made of.

The higher level of acidity in the seawater used in these experiments is not expected to occur widely in the ocean until the end of this century. However, the authors point out that these levels already occur periodically along the Central California Coast in some estuaries and in locations when deep water rises to the surface.

Multi-species experiments such as these may help biologists predict which species could be “winners” or “losers” as the ocean warms and becomes more acidic. However, many more studies will need to be done to understand the broader ecological impacts, which involve dozens or hundreds of different species.