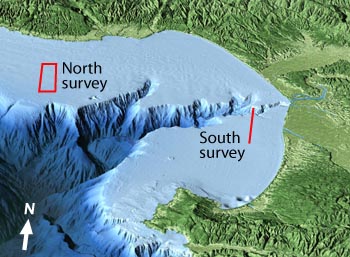 This illustration shows the the seafloor beneath Monterey Bay, along with the locations of the two oceanographic surveys described in this article.

If you could drain Monterey Bay, the exposed seafloor would appear as a broad plain (the continental shelf) ringed by mountains and split down the middle by a steep, winding gorge. This gorge, the Monterey Canyon, starts as a series of gullies just off the beach in Moss Landing, but becomes more than a mile deep by the time it reaches the mouth of Monterey Bay, about ten miles offshore. It seems obvious that this huge canyon would influence the currents and the distribution of life in Monterey Bay. But scientists have had a hard time linking canyon-related processes with specific biological events because conditions in the bay are so complex and change rapidly over time.

MBARI oceanographer John Ryan has spent years examining the relationships between physical and biological processes in Monterey Bay. He recently published a scientific paper describing two different ways in which Monterey Canyon can influence the growth and distribution of phytoplankton (microscopic marine algae) in the bay. Such research has broad applications because phytoplankton support most other life in bay waters. 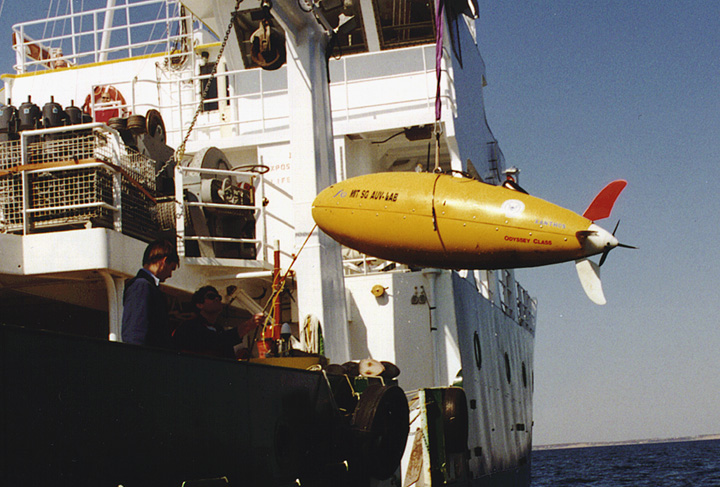 Ryan conducted this research as part of the MUSE experiment, an intensive, multi-disciplinary, multi-institution study of oceanographic processes in Monterey Bay. In addition to using traditional oceanographic tools during the MUSE experiment, Ryan conducted several surveys using an autonomous underwater vehicle (AUV). AUVs are robot submarines that are programmed at the surface, then released to follow a specific path through the water, collecting data as they go. In this case, the AUV collected data on water temperature, salinity, turbidity, pH, and concentrations of oxygen and chlorophyll. Oceanographers use chlorophyll concentration as an indicator of phytoplankton population density.

AUVs are often programmed to follow a roller-coaster course through the ocean, alternately diving and surfacing to collect data from throughout the water column. This provides a two-dimensional cross section of the ocean. To create a three-dimensional picture, the AUV continues its vertical up-and-down motion while following a rectangular grid over the seafloor (in oceanographic circles, this is known as “mowing the lawn”). Ryan used both survey techniques during the MUSE project.

During the course of the month-long MUSE experiment, marine biologists observed a bloom of potentially toxic algae along the continental shelf just south of the inner part of Monterey Canyon. Ryan sent his AUV to perform a two-dimensional survey of this area. The AUV data showed a wedge-shaped tongue of cold, dense water apparently emerging from the canyon and flowing up onto the continental shelf, as shown in the illustration below. Where this dense water crossed the shelf, a plume of turbid water rose from the seafloor up toward the surface. High concentrations of phytoplankton were observed just above this turbid plume. 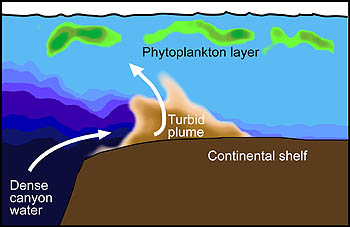 This simplified drawing shows the southern edge of Monterey Canyon where Ryan performed a two-dimensional AUV survey during the MUSE experiment. Cold, dense water can be seen emerging from the canyon, while a turbid plume extends from the sea bottom toward a layer of phytoplankton just below the sea surface. Image: (c) 2005 MBARI

Ryan speculates that the dense, cold water flowing out of the south side of the canyon was driven by a combination of internal tides and wind-driven currents. Internal tides in Monterey Canyon can cause layers of cold water to rise and fall by as much as 100 meters (330 feet) over a few hours. This dense water sometimes “sloshes” out over the edge of the canyon like water overflowing a bathtub. Similarly, computer models indicate that Monterey Canyon can “steer” wind-driven currents up the canyon and out over the adjacent southern shelf.

Ryan’s AUV data also suggested that the dense water emerging from the canyon was transporting sea-bottom sediments up toward the ocean surface. Such sediments often carry nutrients such as nitrate, which act as fertilizer for phytoplankton. Sea-bottom sediments could also carry phytoplankton resting spores, which come to life when they reach warm, lighted waters near the sea surface.

The upwelled seafloor sediment could also have carried iron—a trace nutrient that is vital for diatom growth. As mentioned previously, Ryan and his fellow researchers were especially interested in this particular phytoplankton bloom because it contained high concentrations of Pseudo-nitzschia diatoms, which can be poisonous to marine animals. However, no sick animals were observed during this bloom. Previous studies have suggested that Pseudo-nitzschia diatoms are less toxic when they have an adequate supply of trace nutrients such as iron. Since iron is relatively abundant in sea-bottom sediments, Ryan speculates that iron in the turbid plume may have made the diatoms less dangerous to marine life.

During another part of the MUSE experiment, Ryan set out to study how physical and biological processes interacted near an oceanic front—an area where two different water masses meet. Fronts are often visible because they concentrate organic material at the sea surface, smoothing the water and forming long, linear “slicks.” On August 31, 2000, Ryan spent several hours on the Research Vessel Point Sur steaming across Monterey Bay looking for surface slicks. Just north of Monterey Canyon, he found a large surface slick extending in an east-west direction as far as the eye could see.

Ryan then programmed his AUV to follow a zigzag course starting north of the slick and continuing south across it, to create a three-dimensional view of the water on either side. Altogether, the AUV made more than 60,000 measurements, covering a volume of ocean 3 kilometers wide, 7 kilometers long, and 70 meters deep. (This survey area is shown in the map at the beginning of this article). 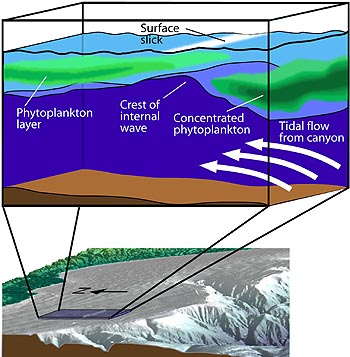 This drawing shows a simplified view of the internal wave that formed just north of Monterey Canyon during the MUSE experiment. Phytoplankton are concentrated on the up-current side of the wave (closest to the canyon), but are relatively sparse directly over the wave crest. Image: (c) 2005 MBARI

The AUV data revealed that the surface slick lay directly over a 10-meter (30-foot) internal wave, where denser water bulged up toward the sea surface (see figure below). Ryan recognized this as a textbook example of a “lee wave” that formed when the incoming tide flowed up over the sharp edge of the canyon onto the continental shelf. Similar lee waves can sometimes be seen in the sky when strong winds flow upward over tall mountains, creating dramatic lens-shaped clouds.

In this case, the lee wave not only affected the physical characteristics of the water, but created dramatic variations in phytoplankton abundance. To the north of the front (and across much of the bay) the researchers observed a distinct layer of phytoplankton centered about 10-20 meters below the sea surface. The internal wave apparently pushed up through this layer of phytoplankton, creating a relatively barren area directly over the wave crest. More importantly, on the upcurrent side of the wave (the side closest to the canyon), the internal wave created a band of highly concentrated phytoplankton.

This concentration and dispersion of phytoplankton is not just a scientific curiosity. Phytoplankton support virtually all of the animals in Monterey Bay. Diatoms, for example, provide food for krill and anchovies, which in turn provide food for larger animals such as salmon, sea lions, and whales. Many juvenile fish seek out areas of concentrated phytoplankton, and will not survive into adulthood unless they find such areas. Humans also seek out ocean frontal areas because they are more likely to find schools of fish in such regions. Ryan’s research helps illuminate some of the invisible processes that create and support these regions of localized bounty.

Since the MUSE experiment, Ryan has continued to investigate the interactions between biological and physical processes in Monterey Bay. As he explains, “The bay is a natural laboratory, full of diverse phenomena that cause rapid changes in the physical, chemical, and biological environment. Resolving and understanding this complexity is a tremendous challenge.” Ryan points out that AUVs and other high-tech devices are just starting to allow scientists to see the patterns within this complexity. Equipped with such tools, Ryan will no doubt be discovering new physical and biological interactions in Monterey Bay for many years to come.