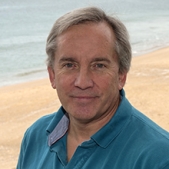 Jim Birch joined MBARI in April, 2007 as the Instrument Group Leader in the Engineering department. While overseeing engineers developing instrument systems for oceanographic research, he became the project manager for the Environmental Sample Processor (ESP) project, begun by P.I. Chris Scholin in the early 2000’s. In November 2009 he moved into his current role as Director of the SURF Center (Sensors: Underwater Research of the Future). In this role he oversees all aspects of the ESP project.

Jim received his B.S. from the University of North Carolina, Chapel Hill, and his M.S. and Ph.D. from the University of Michigan. He worked as a postdoctoral fellow at Northern Arizona University (Kiisa Nishikawa) and as a research scientist at the University of California, Berkeley in the lab of Michael Dickinson, where he worked on the fluid dynamics of insect flight using a scaled robotic insect model immersed in two tons of mineral oil. He continued honing his instrument design experience at Lawrence Livermore National Laboratory, working on various biodetection technologies and point-of-care diagnostic devices for biomedicine before coming to MBARI.