MOSS LANDING—In photographs, it looks like a big red spaceship cruising the ocean depths. But it’s actually a new species of jelly that was discovered and described by scientists at the Monterey Bay Aquarium Research Institute. MBARI scientists published their research on this unusual animal in a recent online version of the journal Marine Biology.

With a bell diameter of up to a meter wide, the new jelly, named Tiburonia granrojo or “big red,” would seem tough to miss, except that it lives deep below the ocean’s surface, at depths of 650 to 1500 meters (2000 to 4800 feet). MBARI scientists observed the jelly using video cameras on deep-diving remotely operated vehicles (ROVs). In fact, the jelly is named after MBARI’s ROV Tiburon. 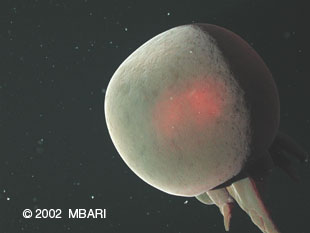 At up to a meter (over three feet) across, Tiburonia granrojo moves through the deep ocean like a big red space ship. Image © 2002 MBARI

Although MBARI scientists saw this jelly during ROV dives as early as 1993, it was not recognized as a new species until several years later. George Matsumoto, MBARI biologist and lead author of the paper, was first called in to identify the jelly after it was seen during 1998 geology expedition.

“Diving almost every day, we tend to take for granted some of the unusual and even bizarre animals that we see in the deep ocean.” Matsumoto explains. “This just shows that we need to keep our eyes open, because there’s still plenty to discover down there.”

Matsumoto immediately guessed that he was looking at a new species, but that was just the first step in classifying and naming the creature. First Matsumoto conducted an extensive literature search to make sure that the animal had not already been described. Then he and fellow researcher Kevin Raskoff consulted MBARI’s video annotation database. This database allows MBARI researchers to search through 15 years of dive videos to find all dives during which a particular animal was seen. By reviewing all of the observations of “big red,” they were able to learn about the jelly’s typical size and geographic range.

Although first observed in the Pacific Ocean off California, MBARI scientists have also seen T. granrojo in deep waters near the Hawaiian Islands and, most recently, in the Gulf of California. To further extend the jelly’s range, Matsumoto and Raskoff worked with scientists at the Japan Marine Science and Technology Center, who spotted the jelly in Japanese waters.

T. granrojo is not just a new species and genus. It is so different from other jellies that it had to be assigned to a new subfamily (Tiburoniinae). Its large size and deep red color are distinctive. But what really sets T. granrojo apart is that, unlike most jellies, it has no tentacles. Instead, it uses its four to seven fleshy arms to capture food. Researchers were particularly surprised to find that the number of arms varies from individual to individual, because this is generally a diagnostic feature for determining different jelly species. 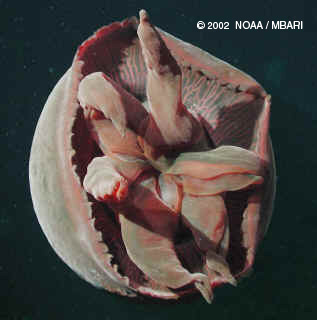 In addition to its large size, “big red” is distinguished by its lack of tentacles, and the fact that different individuals have different numbers of oral arms, which are used for capturing food and feeding. Image © NOAA / MBARI

In some ways, naming the jelly was the easy part, as Matsumoto observes: “There are still so many unanswered questions about this jelly. What does it eat? Who are its predators? How does it reproduce? We have an idea of where it lives and continue to document sightings, but we have much to learn about its role in the ecosystem.”

Like many oceanographic findings, the discovery of “big red” was the result of perseverance, luck, careful use of technology, and cooperation between scientists of different disciplines. The fact that scientists could miss something so big and with such a wide range suggests that many more surprises await us in our exploration of the deep sea.

Note: These images may not be copied, reprinted, or used without explicit permission from MBARI. Members of the media needing higher-resolution versions should contact Debbie Meyer, pressroom@mbari.org, 831-775-1807.

Big Red (Tiburonia granrojo) can reach up to a meter across. The jelly was “discovered” and named by researchers at the Monterey Bay Aquarium Research Institute .This photograph was taken during a remotely operated vehicle (ROV) dive on the Gumdrop Seamount under the direction of scientist Dave Clague. 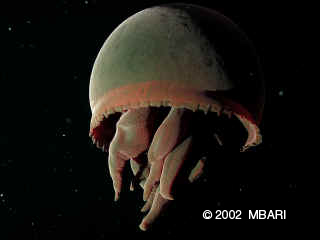 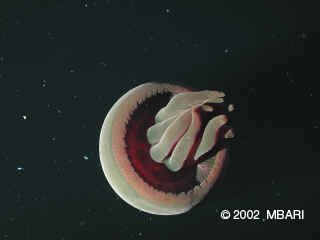