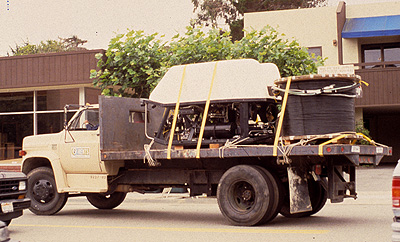 In winter 1988, the original ROV Ventana was delivered to MBARI’s offices in Pacific Grove on a flatbed truck. Image © 1988 MBARI

MBARI’s remotely operated vehicle (ROV) Ventana completed its 4,000th dive on February 6, 2017. With over 16,000 hours underwater, Ventana is by far the most experienced scientific ROV in the world. For almost 30 years, this underwater robot has given researchers a window into the depths of Monterey Bay. Although Ventana has seen many changes and technical upgrades over the last three decades, its success and longevity are primarily due to the dedication of the people who have operated and maintained it.

When MBARI first purchased ROV Ventana in 1988, the fledgling institute had barely gotten started. The first ROV pilots, Chris Grech and Jim McFarlane, had plenty of experience in operating and piloting undersea craft. But they had to develop all the ship-board routines for launching, recovering, and working on the cutting-edge ROV from scratch.

MBARI’s Technical Support Manager, Craig Dawe, joined the institute as an ROV pilot in 1990 and remembers those early days. “Chris and Jim were doing about 170 dives a year. Things were much simpler than they are now. But some of the innovations that happened right at the beginning were huge. The first three-chip video camera ever used on an ROV was right here at MBARI in 1988. It was a major innovation at the time.”

Dawe continued, “A lot of the original gear for Ventana was built in-house. For example, when Ventana was built, there was no such thing as an Ethernet fiber optics transmitter/receiver. It just didn’t exist. The engineering team built that. Now these things are commonplace. You can go to Best Buy and get a fiber optic-to-copper converter for 100 bucks.” 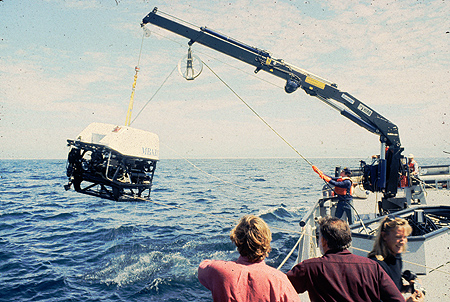 ROV Ventana with its original white foam pack being launched from the research vessel Point Lobos in 1989. Photo © 1989 MBARI

But technology is not the only thing that has changed. Dawe has also seen a dramatic evolution in the physical characteristics of the vehicle. “When Ventana was delivered, it only weighed 4,000 pounds in air. Now, depending on the configuration, it can weigh up to 8,300 pounds. So it’s doubled in size. It’s also gone through three foam blocks, two frames, four control systems.”

According to Dawe, “A lot of this evolution was because we were trying to keep up with the scientists; they always want more. More capability, more instruments, more valves… I’ve never met a scientist that doesn’t want more.”

And the scientists got more. In 1999, for example, Ventana became the first ROV in the world to carry an HD video camera. Dawe explained, “With the HD cam, all of a sudden scientists were seeing things that they couldn’t see before. They would say, ‘So that’s how that works…’ It was huge, especially for the biologists. They thought it was fantastic! And so did the pilots. Because all of a sudden we were looking at images on our monitors that were super crisp and clear.” 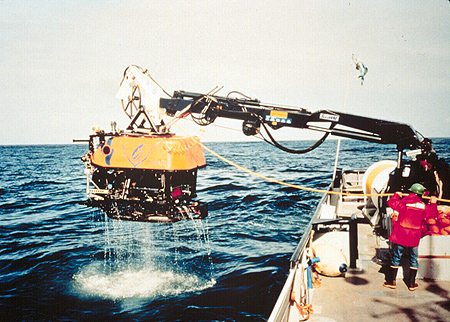 ROV Ventana with its second, “bluebanded goby” foam pack, being recovered onto the research vessel Point Lobos in 1997. Photo © 1997 MBARI

By the late 1990s, Ventana had four pilots and a full-time technician, and was still doing 150 to 170 dives a year. MBARI researchers had discovered that the ROV was not just a tool for exploring the deep sea, but also a platform for collecting lots of samples and conducting increasingly complicated underwater experiments. This meant that Ventana was being asked to carry heavy objects to and from the seafloor.

It soon became apparent that Ventana needed to be able to carry more weight. As Dawe explained, “By this time, we were scrambling to carry 25 pounds of payload. We were doing things like rebuilding the frame of the vehicle using thinner tubing because it would save us 15 or 20 pounds.“

“Having the variable buoyancy system meant we could take down a very heavy package, deploy it on the seafloor, and regain our trim by flooding the tanks. Or we could go down flooded and pick up a very large package, and then regain our trim by pumping out the tanks. That way we wouldn’t have to fight our way back to the surface.” 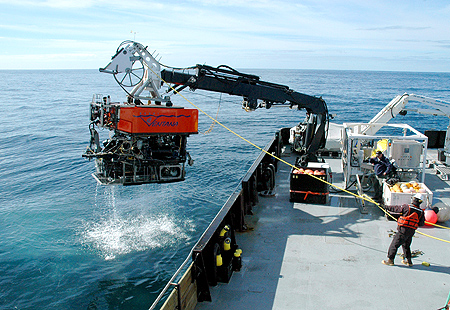 ROV Ventana with its current, much larger foam pack, being recovered onto the research vessel Rachel Carson in 2014. Photo: Kim Fulton-Bennett (c) 2014 MBARI

He added, “One of the things we don’t ever want to do with Ventana is to run it negatively buoyant. So if something bad happens, say you cut your tether, the ROV floats back up to the surface.”

In 2004, Ventana got a new, larger foam pack. “The last foam block change was an important upgrade for us,” Dawe said. “It gave us 900 pounds of additional payload.”

“When we got the foam pack upgrade, we could stop all our pound-pinching. It made life simple. We weren’t fighting to keep up with the science. It also helped us with deployments on the MARS [Monterey Accelerated Research System] undersea observatory. All the stuff we’ve deployed at MARS has been fairly big, and having this additional payload helped a lot.”

Asked about other milestones for Ventana, Dawe smiled. “Well, in October 2000, we cancelled a postage stamp underwater. We got a plaque for that…“

After thinking a minute, he added, “Other big firsts for Ventana were horizontal rock coring from the ROV [in 1992] and later vibracoring from the ROV [in 2005]. Those were both things that had never been done before. The horizontal drill was later used in the Indian Ocean by ROV ROPOS, and was then used by Woods Hole on ROV Jason. The tools that have been developed on our ROVs—we try to get those out to the rest of the world.”

This has also been true for some of the control systems developed by MBARI Adjunct Steve Rock of Stanford University. As Dawe pointed out, “Some of the automated control and station-keeping approaches Steve and his students have developed have affected the entire ROV industry.”

The never-ending challenge of maintenance

Looking back at his time as a Ventana ROV pilot, Dawe commented, “Piloting an ROV is 99 percent boredom and one percent pure grief… simply because something has gone wrong.  ROV failures can be calamitous. You don’t want to lose a two and half million dollar ROV. Someone will yell at you.”

“Sometimes they’ll break and you’ll be frustrated and spend hours on a problem. Then you’ll come back the next morning and it’s working again. You look around and wonder, ‘What the heck just happened?’ It’s like they fix themselves. All you can do is say, ‘Okay, great, it works now…’ But you don’t know what the problem is. So that’s always in the back of your mind – was it a one-time thing or is it going to fail again?  You ask yourself, ‘Was it just a connector that I moved?’”

He continued, “There are so many bits and pieces to these things. It could be a rubber band that you’re using to hold something together because there was no other good way to do it… and it broke! Or it’s a connector you’ve just pushed back together and the thing starts working again. And you just scratch your head and go, ‘Oh well.’ Until it’s really broken, you can’t fix it.”

He added, “One of the things you realize when you’re working with equipment like this is that it’s never over. You’re always learning. Whether it’s the forces on the equipment that you’re dealing with or how electronics interact with each other… you’re always learning different things and different ways to do stuff. The people that help build this stuff, our welders, our engineers—they’re all learning too.”

It’s the people that make the machine 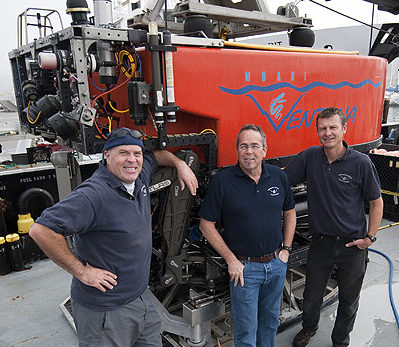 Reflecting on all these changes and challenges, Dawe repeatedly talked about the key role played by ROV pilots. “For the most part it’s always been the pilots doing the maintenance and repair on the vehicle. The pilots also do any new design work. When we need to install new tools on the ROV, some get bought, but most are built in-house… and designed in-house, often by the ROV team, but also in conjunction with MBARI engineers and technicians.

“Right now we have two fine pilots, DJ Osborne and Mike Burczynski. DJ has a Master’s degree in mechanical engineering. Mike has a degree in marine science and was an instrumentation technician before he was an ROV pilot. They’re both pretty fluent in the engineering design software that we use here at MBARI.”

Dawe adds, “Right now, with these two guys, we’re doing probably between 50 and 70 dives in a year. So it’s scaled back significantly. On the plus side, with the reduced number of dives, the wear and tear on the vehicle is less and we need fewer people to support it.”

“Over the long term,” Dawe said, “a huge part of keeping Ventana going has been MBARI’s willingness to support these things financially. MBARI is very generous with the amount of money that they allow us to use for maintenance on a yearly basis. That means we can keep the vehicle in top running condition.”

“Another big thing is that we have this fantastic support staff, everything from engineers to technicians to machinists. The pilots do a lot, but it’s a group effort. And then there’s the ship’s crew. They don’t get enough credit. Without them we can’t do our job. It’s as simple as that.”

“In the end,” Dawe said, “I think a major element in Ventana’s success is the dedication of the pilots and their desire to make it work. We’re here to make the science successful. That’s what we strive to do every time we go out. Some dives are more challenging than others, but we still do our best. That is the big key—it’s our willingness and desire to be successful. And that goes across the board here at MBARI—the engineers, the support staff, the ship’s crew–we’re all in this together.”

January 28, 2020 – In an intricate underwater robot ballet, two of MBARI's underwater robots recently shot video of each other in the depths of Monterey Bay.
July 24, 2018 – A recent paper in ScienceRobotics describes a new bio-inspired sampling system that was tested using MBARI's remotely operated vehicle Ventana.
March 23, 2018 – A recent issue of Oceanography magazine includes ten articles that highlight a few of MBARI’s accomplishments, as well as ongoing research and development.