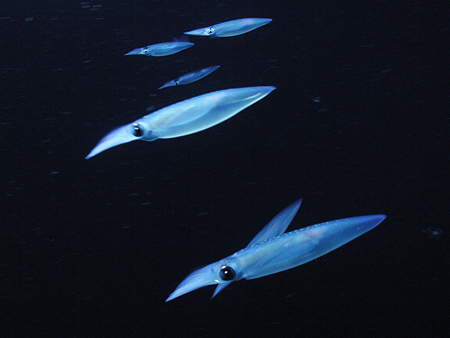 Market squid (Doryteuthis opalescens) are one of California’s biggest fisheries, but their populations fluctuate drastically with changes in ocean climate conditions. Image: © 2001 MBARI

In good years, noisy fishing boats filled with freshly-netted market squid spill their slippery catch into processing plants on the California coast. During those years, market squid (Doryteuthis opalescens) are California’s most productive fishery, accounting for up to $70 million in revenue and 110,000 metric tons of squid. But in other years, calamari is hard to find. Cyclical changes in ocean conditions change the productivity of California waters, and as a result squid populations plummet and the fishing industry suffers.

Fishermen and researchers have known about this cycle for decades—the rise and fall of squid populations are clearly linked to El Niño cycles—but the cause is a complicated tale. This is according to Steven Litvin, an ecologist at the Monterey Bay Aquarium Research Institute (MBARI). Litvin spent several years researching the ups and downs of market squid looking for trends that could help fishers and regulators better predict how squid populations might respond to natural and human-induced changes in the ocean.

The story starts with juvenile market squid, a month or so after they hatch from their egg capsules. The young predators are only 15-70 millimeters long, “sort of similar in size and shape to a baby carrot,” said Litvin. As they grow to adult size, the juveniles rely in large part on two different species of krill as food. 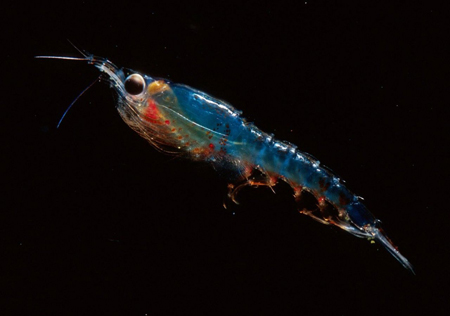 Thysanoessa spinifera is one of two species of krill that market squid often feed on in California waters. Image: Steve Haddock

Krill are small crustaceans that live their lives filtering tiny algae, also known as phytoplankton, out of the water column. In places like California, where upwelling currents bring deep, cold, nutrient-rich water to the surface, the algae bloom and flourish, nourishing huge swarms of krill. But when ocean conditions vary, so do the phytoplankton.

In an El Niño year, the surface of the central and eastern Pacific Ocean warms, winds change, and upwelling slows along the usually productive California coast. These are less productive years in terms of the oceanic food web—less upwelling means less algae, which means fewer krill. Fewer krill mean that juvenile squid might have a tough time finding and collecting enough food.

Litvin and colleagues decided to pick apart one piece of this complex story—the feeding behavior of juvenile squid on two krill species. The krill vary both over time, with El Niño cycles and other changes in yearly productivity, and over space, up and down the California coast. One species of krill (Thysanoessa spinifera) gathers in larger numbers over the continental shelf near to shore, thrives in nutrient-rich waters, and is more frequently found in central and northern California. The other (Euphausia pacifica) is common farther away from shore in deeper water, and can be found anywhere along the California coast.

Most species of krill spend their nights feeding on algae near the sea surface and descend into dark, inaccessible waters during the day to avoid predators. But E. pacifica makes a much longer daily migration than T. spinifera, taking them deeper below the surface and making them more difficult prey for juvenile squid. In productive years, Litvin expected that squid would feed on plentiful krill from both species, but during unproductive years the squid might be forced to change their diets. 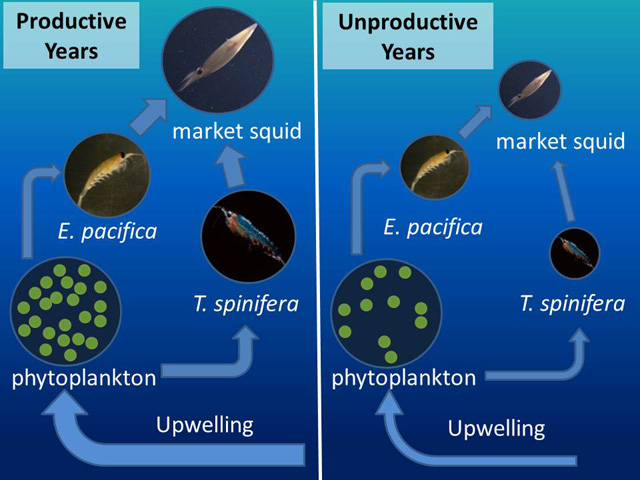 This graphic shows simplified food webs for market squid during productive years and unproductive years. The sizes of the circles indicate the relative populations of each type of animal. Image: Vicky Stein © 2018 MBARI

In partnership with the National Marine Fisheries Service Litvin and the team used samples from midwater trawl surveys to look at stable isotopes in juvenile squid tissue. By looking at specific kinds of carbon and nitrogen atoms in a squid’s body, the researchers hoped to learn where that individual’s food was coming from.

Researchers find a tangled web of isotope gradients in the oceans. Isotopes, “heavier” or “lighter” versions of atoms like carbon, nitrogen, sulfur, or oxygen, move differently through nutrient cycles and food webs. Nitrogen-15, for example, is found to increase in animals higher up the food web, accumulating as one animal consumes another.

If Litvin found that a squid had stable carbon and nitrogen values close to those of T. spinifera, the near-shore krill, it would suggest that the animal was feeding more heavily on this species. Squid with different isotope values could be feeding more heavily on offshore krill (E. pacifica) or other prey. Litvin noted that with so many different variables affecting isotopes (latitude, distance from land, water depth, and others), the specific numbers can be confusing. Researchers must make careful comparisons between sampling sites and years.

Litvin and colleagues examined juvenile squid tissue samples collected from many sites along the California coast in 2013 and 2015. While 2013 was an average year in terms of productivity, 2015 was a year of a strong El Niño event—an atypical year with variable upwelling, an unusual offshore warm water “blob,” and changes in food webs.

Over the whole California coast in 2013, squid isotope values in areas with lots of upwelling and productivity corresponded well with T. spinifera as a major food source for the juvenile squid, as expected. Litvin was then unsurprised to find that in 2015, isotope ratios indicated that juvenile squid in some of the same areas fed less on T. spinifera and more heavily on difficult-to-catch E. pacifica. 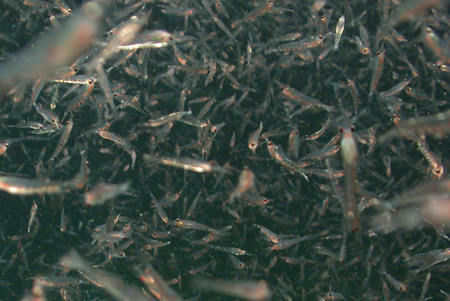 Swarms of krill, such as this one,  flourish in productive, phytoplankton-rich water. Image © 2003 MBARI

Southern California was a bit different. The squid populations in the south are less variable than the boom-and-bust cycles commonly seen in central California and, no matter the ocean conditions, those squid seem to rely on E. pacifica. While central California squid populations seemed to respond to relative abundances of T. spinifera and E. Pacifica, southern California populations might respond just based on the abundance or absence of E. pacifica. The variation between unproductive and normal years, said Litvin, could be “based on the same productivity, but with different drivers.”

Litvin started this research before joining Jim Barry’s lab at MBARI. Now, Litvin hopes he and his fellow researchers will be able to discover even more of the interactions that tie together krill, squid, and environmental oscillation.

As El Niño cycles affect productivity off of the California coast, scientists and fishermen will be watching squid populations closely. And as climate change begins to shift patterns of upwelling and other ocean conditions, Litvin hopes that research on the interactions between currents, krill, and squid will help people predict what might happen to this lucrative and vital species.

According to Litvin, “it’s still a really evolving story.”

January 29, 2019 – Beaked whales congregate in parts of a Navy sonar test range off Southern California that have dense patches of deep-sea squid that are lacking in nearby “sonar-free” areas.
Apr 2, 2018 – MBARI researcher Steve Litvin is investigating the feeding habits of juvenile market squid in changing ocean conditions. It's a tale of two krill.
Jan 31, 2018 – A recent paper describes an unusual discovery: dead squid littered across the deep sea bottom.