Harnessing the awesome power of the ocean waves 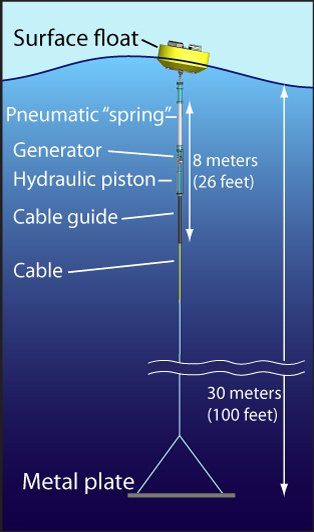 MBARI engineer Andy Hamilton looks out his office window in Moss Landing and points at the waves crashing on the beach below. “Pretty impressive, aren’t they? You’d think there’d be a way to make use of all that energy.” Since 2009, Hamilton has led a team of engineers trying to do just that. Their goal is not to replace the hulking power plant that overlooks Moss Landing Harbor, but to provide a more generous supply of electricity for oceanographic instruments in Monterey Bay.

Hamilton’s “power buoy” project is funded by the Defense Advanced Research Projects Agency (DARPA), which sponsors research into revolutionary new technologies that might one day be used by the U.S. military. The project started with a three-month grant to assess the availability of wave power around the world, and to assess DARPA’s previous attempts to generating electrical power from the waves.

Hamilton’s initial research and calculations showed that DARPA’s previous efforts had been too timid—their small prototype buoys were never able to take advantage of the full energy of the waves. So Hamilton proposed to “go big” (but not as big as commercial wave-power projects).

He spent another nine months using computer models to test different buoy designs under a variety of simulated wave conditions. In the end, he came up with a buoy that was 2.5 meters (8 feet) across. Hanging in the water below this buoy is a massive metal plate 3 meters (10 feet) wide and 5.5 meters (18 feet) long.

Because most wave motion occurs at the sea surface, the buoy rises and falls with the waves, but the plate, 30 meters (100 feet) down, remains relatively stationary. Between the surface buoy and the metal plate is a large hydraulic cylinder with a piston inside. As the buoy rises and falls, it pushes and pulls on this piston. This forces hydraulic fluid through a hydraulic motor, which in turn runs an electrical generator.

Engineering in the real world

This sounds simple in concept, but as is often the case, things become much trickier when you try to build a real device that will work in the real ocean. Fortunately, Hamilton recruited a team of resourceful engineers to work on the project. Mechanical engineer François Cazenave has worked full time on this project for the past 18 months. Other team members include mechanical engineer Jon Erickson, electrical engineer Paul McGill, and software engineer Wayne Radochonski. 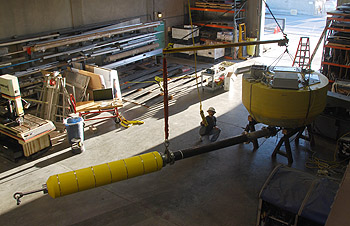 Mechanical technician John Ferreira prepares the power buoy for a deployment in MBARI’s high bay. At this stage in the design process, the hydraulic piston was enclosed in a cylindrical housing of yellow foam (at lower left). Image: François Cazenave © 2011 MBARI

One of the first challenges the team faced was figuring out the best way to convert the vertical motion of the waves into rotary motion that could power a generator. First they bought a custom-made generator from an outside company, but that turned out to be too inefficient to be useful. Going back to the drawing board, the team designed their own system using an off-the-shelf hydraulic motor similar to those used on earth-moving equipment and on MBARI’s underwater robots. These hydraulic motors use moving hydraulic fluid to drive a rotating shaft with up to 95 percent efficiency.

Another challenge that Hamilton’s team faced was designing a mechanism that would return the piston to its starting point after a wave had passed. Hamilton initially envisioned using a large metal spring for this purpose, but the metal spring turned out to be much too heavy. So the team redesigned the system to incorporate a pneumatic spring—a chamber filled with nitrogen gas, and mounted at one end of the piston. As the piston moves with the waves, it compresses or decompresses the nitrogen gas in the chamber. After the wave passes, the gas in the chamber returns to its original pressure, forcing the piston back to the middle of its stroke.

In yet another challenge, during the first field trials of the new piston, the cable attached to the metal plate swung from side to side, damaging the seals of the hydraulic cylinder and causing it to leak. The team added a long metal tube as a guide to make sure that the cable pulled in line with the axis of the piston. In a later deployment, metal shards in the hydraulic fluid caused additional damage. Eventually the engineers rebuilt the system, adding a fluid reservoir/pressure compensator and an in-line filter to keep the hydraulic fluid clean.

Over the past year, the power buoy has been deployed in Monterey Bay about half a dozen times. With each deployment, the team added new features and refinements. By late 2011, the buoy was generating up to 400 watts of power, more than twice what MBARI’s existing moorings can produce using wind generators and solar panels. Hamilton says, “Remarkably, the system is behaving very similar to our models. We were aiming to produce about 500 watts of power, so we’ve almost hit our target.” 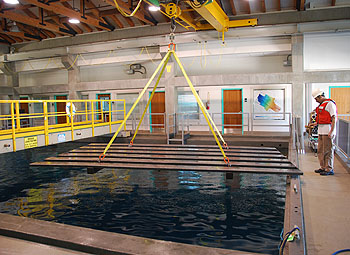 The next challenge: making useable electricity

Although we tend to think of the open-ocean waves as long, gentle rollers, anyone who has been at sea knows that wave motion is often erratic and unpredictable. So is the voltage produced by the generator on the power buoy. As each wave passes, the generator first speeds up, then slows down again, generating electricity at from 0 to 500 volts (AC).

In late spring of 2012, the team will test a new version of the system that incorporates power-conditioning hardware and software to change this fluctuating voltage into a steady 24 volts (DC) useable for scientific instruments. Initially, this current will be used to charge batteries on the buoy. Any excess current will be run through a series of resistors that dissipate the energy as heat.

During the upcoming deployment, the team will also test new hardware and software that could dramatically increase the efficiency of the power buoy. Surprisingly, this involves adding resistance to the system—essentially making the piston harder to push at certain times in the wave cycle. 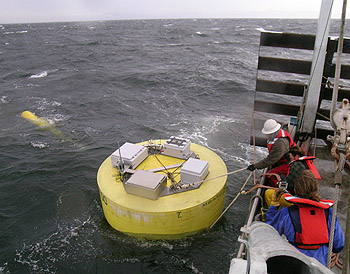 MBARI engineers and technicians recover the power buoy during stormy sea conditions. On the right side of the image you can see the metal “plate,” which has been hoisted up on the stern of the boat. Image: Kim Fulton-Bennett © 2011 MBARI

The dream: an underwater charging station

As if the challenge of extracting energy from the waves wasn’t enough, the power buoy project includes another ambitious element—an underwater charging station for undersea robots. Autonomous underwater vehicles (AUVs) are undersea robots that are programmed at the surface and then travel beneath the waves, collecting information as they go. However, many AUVs can only run for a day or two before their batteries need to be recharged.

Working in tandem with Hamilton’s team, a group of MBARI engineers led by Jim Bellingham and Brett Hobson have been working on an underwater “docking station” that will eventually hang down beneath the power buoy. When an AUV senses that its batteries need charging, it will automatically home in on the docking station, plug itself in, download its data, recharge its batteries, then head out for its next mission. Hamilton says, “This is the ultimate dream for the power buoy. We’re working on the pieces of it now.”

So far, the AUV-docking team has built a non-powered docking system, and have been developing software for MBARI’s long-range AUV so that it can automatically find and park itself inside this “mock dock.” They are also working on the electronics for the actual charging dock. In field trials, the AUV has entered the “mock dock,” but cannot yet do this consistently. 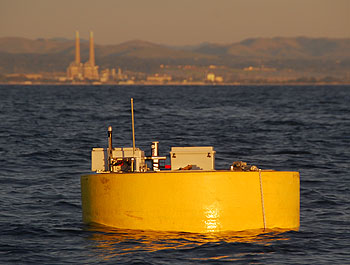 The power buoy floats in Monterey Bay at sunset, with the Moss Landing power plant in the background. Image: François Cazenave © 2011 MBARI

The future of wave power

Hamilton’s development grant for the power buoy runs out in Fall 2012. By that time, he hopes to demonstrate the system’s usefulness and attract additional funding for the project. According to Hamilton, “A lot depends on finding a ‘science driver’—a specific science project that would benefit from this extra power we’re producing.” He adds, ”We’re not trying to compete with wind and solar generators. We’re complementing them. As with most renewable energy sources, it’s better to have some redundancy.”

Although big storm waves carry a lot of power, it turns out that the bulk of the wave energy in Monterey Bay is provided by moderate sized waves that occur relatively frequently. Cazenave explains, “The power buoy must be able to survive storm waves, but it is most efficient in the most common types of waves—say two meters high. There is more energy in bigger waves, which can reach four to five meters around here, but they are not so common.”

The vastness and changeability of the ocean will always hamper our efforts to understand this global environment. One of the key challenges for oceanographers over the next decade will be how to power complex instruments that remain in the open ocean for long periods of time. MBARI’s wave-power buoy is part of the solution to this problem.

Feb 4, 2015 - In early January 2015, a team of MBARI engineers, led by Andy Hamilton, set out to sea to recover an experimental buoy that creates electrical energy from ocean waves. This power buoy had been deployed six miles southwest of Moss Landing Harbor for 131 days, while engineers tested the system’s ability to handle storms.
Mar 26, 2014 – Beginning in 2009, a team of MBARI engineers (led by Andrew Hamilton) designed a wave-power buoy—an instrument that utilizes ocean waves to produce useable electricity (typically 300-400 Watts on average, depending on the weather).
May 11, 2012 – MBARI engineer Andy Hamilton looks out his office window in Moss Landing and points at the waves crashing on the beach below. “Pretty impressive, aren’t they? You’d think there’d be a way to make use of all that energy.” Since 2009, Hamilton has led a team of engineers trying to do just that.
Researcher