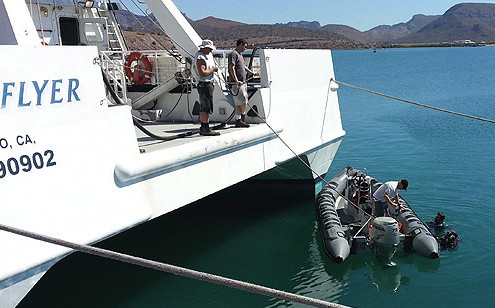 The Gulf of California expedition is nearing its end, with one more leg led by Chief Scientist Charlie Paull starting on May 7. The R/V Western Flyer and its crew have been in the Gulf of California since early February and have completed six research cruises, each for a different MBARI science team and their collaborators with different research goals. Between each cruise, the Western Flyer made port stops in La Paz, Mexico, for the crew to take a short break and restock the ship, and for science teams to swap out. This week, the Western Flyer made its last departure from La Paz, Mexico, for a six-day transit to San Diego, California, where Paull and his science team will hop onboard to study how tectonic faults create change in the seafloor structure.