Weird worms of the deep

It’s been six years since MBARI biologist Robert Vrijenhoek went looking for deep-sea clams and stumbled upon a 30-foot whale carcass. In those six years, Vrijenhoek and his team observed the ecosystem thriving around this carcass, discovered strange and wonderful worms with roots, sank five more whale carcasses to create artificial whale falls, and hauled cow bones to the seafloor to see if worms would grow on them too.

Two Dover sole rest beside vertebrae from a dead whale that Vrijenhoek’s team towed out to sea and placed on the seafloor. Image:© 2007 MBARI

That first natural whale fall was a bustling center of deep-sea animal diversity on the floor of the Monterey Canyon. The deep seafloor is usually not rich in food sources, but the whale carcass brought a large feast of organic material to this resource-poor area. When MBARI researchers discovered the whale fall on Feb. 6, 2002, its skeleton was intact, some soft tissues were still attached, and large white mats of filamentous bacteria grew on it. Little red worms also were growing in thick carpets all over the bones.

With help from worm expert Greg Rouse (now at Scripps Institution of Oceanography), the scientists learned from DNA analysis that the worms were related to the tubeworms that live around hydrothermal vents in the deep sea. Vrijenhoek’s team named the worms Osedax, Latin for bone devourer, and described two new species that occurred together on the whale fall.

Osedax worms, also known to researchers as “bone-worms,” are unusual creatures. They have no mouth or guts, but they do have roots that penetrate the whale bones and branch into the marrow cavity. Bacteria living in the roots digest fats and protein from bone marrow.

The symbiotic relationship between the worms and the bacteria in their roots is similar to those that exist among other animals and plants. “We do need bacteria in the gut to help us. We’re not completely dependent on them, but we wouldn’t be quite as healthy without their help to digest things that are not as easy to digest otherwise,” Vrijenhoek said.

All of the Osedax worms found carpeting the whale bones are females; the males are microscopic and live inside the females’ bodies. The males contain developing sperm but also bits of yolk. The first Osedax worms to colonize bones are females—males appear later. Scientists are not sure why. As they accumulate, the males increase in number from one in three worms to three or four males per female. Vrijenhoek hypothesized that sex is environmentally determined in these worms. It is possible, he thinks, that landing on a bone causes arriving worm larvae to develop into females, but landing on a female worm may stimulate arriving larvae to become males. 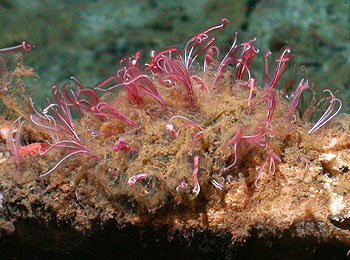 “This type of environmental sex determination is not common, although it happens in many more animals than people suspect,” Vrijenhoek said. The sex of crocodiles, alligators, and marine green turtles can be affected by their environments. The only way to prove whether Osedax undergo this type of sex determination is by doing experiments. However, experiments with Osedax are not easy, because keeping the worms alive in the lab is a daunting task.

After finding his first whale carcass 2,891 meters below the surface and realizing what a thriving ecosystem had grown around it, Vrijenhoek was curious to see how whale skeletons would fare at other depths. With the help of research technician Shannon Johnson, Vrijenhoek’s team sank additional whale carcasses at 385, 633, 1,018 and 1,820 meters. These carcasses had washed up on area beaches.

These “artificial whalefalls” experienced different pressures, temperatures and oxygen levels, and developed communities of different animals, but various species of Osedax worms were found at all five depths. At least eight species of Osedax are now known from Monterey Bay alone and others have been discovered off the coasts of Japan and Sweden.

Osedax worms break down and leave holes in whale bones, allowing other animals to chew them up and access nutrients in the bones. The worms set the pace for the process of habitat development and decay. At the 1,018 meter whale fall, a dense population of Osedax worms broke down the whale bones rapidly. Two whale falls placed at 385 meters faced more disturbances because of frequent sediment movement in the shallower portion of Monterey Canyon. Consequently, sparse bone-worm populations resulted in slower degradation to both whale carcasses at this shallow site.

Though Osedax worms are the only animals known to live at all of the Monterey whale falls, many other creatures created homes at each site. Depending on the depth of the whale fall, hagfish, sleeper sharks, crabs and amphipods could be part of the community. One of Vrijenhoek’s favorite animals was an octopus that took up residence in the skull of a dead whale and fed on deep-sea crabs.

“It’s a wonderful example of animals taking advantage of the windfall,” Vrijenhoek said. “It’s a bonanza for them—they get a motel and food supply.”

After observing the ecosystems growing around the whale carcasses, the MBARI researchers decided to find out if bones from other animals would also attract Osedax worms. The bones came from a local meat market—the scientists was looking for the biggest bones they could conveniently find, and cow bones fit the criteria. 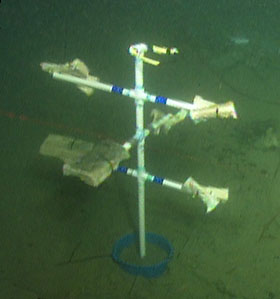 Postdoctoral Fellow Joe Jones hung the cow bones on “bone trees” made of PVC pipe. The researchers anchored the trunks of the “bone trees” in buckets of cement and planted them on the seafloor near several of the whale falls.

In 2007, Vrijenhoek’s group published its findings on the Osedax worm colonies growing on cow bones at the bottom of the sea. Now the MBARI researchers are considering other bones that can placed at the bottom of the sea – bones of sea lions, elephant seals and pigs, or even shark cartilage. “I’d love to put down an alligator, if I can get my hands on one,” Vrijenhoek said. Whatever animal it turns out to be, its bones will probably find a new home at 600 meters or 1,000 meters underwater, since these sites are close to shore and accessible to the scientists. The 1,000 meters site is especially fertile, with high animal diversity.

Osedax worm research contributes to our understanding of how carbon is recycled on our planet. Scientists previously thought bones on the seafloor would be buried in sediment, and become fossilized, so the carbon in them would be inaccessible for perhaps millions of years. However, if bones are not buried right away, animals like Osedax worms can use the carbon in them. The worms break down the bones, extract nutrition from them, and release eggs and larvae that disperse in the ocean. Understanding how carbon is naturally cycled between the atmosphere, land and water, or buried on the ocean bottom, is one of the most significant puzzles scientists have to solve if we hope to manage a planet faced with increasing carbon dioxide emissions.

“Studying dead whales is not going to solve all our problems, but it tells us a little bit more about a complicated set of processes,” Vrijenhoek said.

After years of studying the deep-sea world, Vrijenhoek is still enthused—”I think evolutionary biology is fun, and it excites me to see unusual adaptations to extreme environments. Extraordinary evolutionary solutions occur when organisms make a living away from photosynthesis and depend on food that drifts down from the ocean surface or is geochemically produced.”

“We learn from the uncommon,” Vrijenhoek added. “Such things tell us a little bit more about what is normal. Studying extreme examples defines the limits to life on this planet and opens our eyes to possibilities elsewhere.”