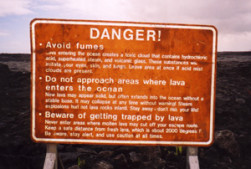 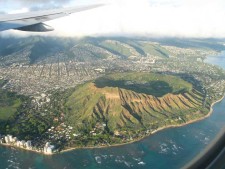 Most of the eruptions of Hawaiian volcanoes are of the “hawaiian” style, often starting with lava fountains then becoming quietly effusive. Some flows can travel quite quickly and great distances. These eruptions pose hazards to property and unwary visitors. Occasionally, eruptions are dangerously explosive, such as Kilauea’s eruptions of 1924 and 1790, which generated large volumes of ash, or the volcanism associated with the rejuvenated stage, such as created Diamond Head on Oahu. (For more on submarine explosive eruptions, see the explosive eruptions page).

Most of the earthquakes are minor, but occasionally there are large, destructive quakes, such as hit Hilo in 1973. Tsunamis from nearby as well as distant earthquakes are a serious hazard: an earthquake in Alaska in 1946 generated a tsunami that hit Hawaii some five hours later in a series of waves as high as twenty-five feet. Landslide debris found around all the islands indicates that landslides of proportions never experienced by modern Hawaiians are a grave hazard (see the landslides page).

Our research on other Hawaiian volcanic hazards

Earthquakes and effects on islands

HAWAII – An earthquake is a sudden movement in the Earth, occurring sufficiently quickly that the movement generates seismic waves. Basic descriptors of an earthquake are origin time, location or hypocenter, and magnitude, which are inferred by analyzing the times and amplitudes of seismic wave arrivals at recording stations equipped with seismographs. Although the vast majority of earthquakes recorded worldwide are small and are detected only by sensitive instruments that gauge the radiated seismic waves, large earthquakes can have widespread and devastating effects. Large earthquakes are also capable of triggering tsunamis when they occur at shallow depths in submarine or near-coastal regions. Earthquakes occur worldwide, but many are located on and near islands because many islands are active volcanoes or are near tectonic plate boundaries. Emergency response on islands is more difficult because of their isolation, making appropriate land use planning, adoption and enforcement of appropriate building codes, and emergency planning more critical there than elsewhere.

HAWAII – Hualalai Volcano is one of three active volcanoes on the island of Hawaii and is in its waning stage. The most recent lava flows occurred around 1800 AD and inundated coastal settlements and fishponds, and according to native accounts, King Kamehameha was called upon to stop them. A detailed field and petrologic study of these flow fields documents at least two eruptive episodes: the Hu’ehu’e flows ending in 1801 AD (visible from the Kona airport), and the Ka’upulehu flow several decades earlier. The morphology and stratigraphy of the Ka’upulehu flow indicate that it was emplaced in several days to weeks, and of the later phase of the Hu’ehu’e eruption suggest a duration of months. Based on analogies with recent eruptions at Mauna Loa and Kilauea volcanoes, the eruptions cannot have occurred at the anomalously high rate (104-105 m3/s, advancing to the coast within a few hours) as previously proposed. Studies offshore have shown that 30-50% of the erupted volume extended beyond the coastline, arguing also for a longer eruption duration.

Although neither of these flows show evidence for extraordinarily fast movement or unusual viscosities, both flows show unusual features. The abundant xenoliths (cumulates from crystallization during the tholeiitic stage of the volcano) for which the Ka’upulehu flow is famous were transported in numerous episodes of deposition and remobilization, during which they eroded the channel systems in which they traveled. Lava transport in upper and middle regions of both flow fields was through lava tubes and pahoehoe-lined channels, indicating thermally efficient transport of lava over great distances. Both flows also re-occupied older cones and lava tubes, a characteristic that may typify infrequent eruptions of older volcanic systems. Although lava flows from Hualalai Volcano do not show anomalous eruptive behavior, they pose a substantial hazard for coastal communities of Kona.