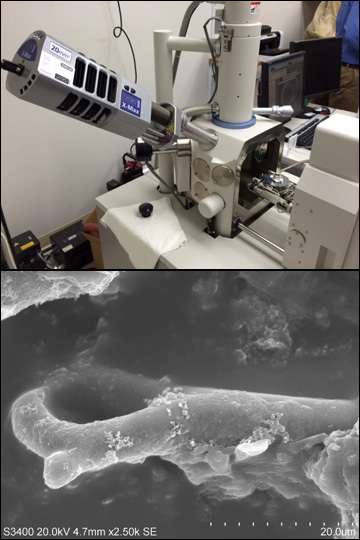 The bottom picture shows a practice image that reveals a tiny structure (25 microns) made of calcium carbonate from the body wall of a deep-sea animal called a holothurian, or sea cucumber.

Seven MBARI geologists and biologists spent the day at nearby Moss Landing Marine Laboratories learning how to use a sophisticated instrument called a scanning electron microscope (SEM, top image). Unlike traditional microscopes that produce images using light, SEMs focus a beam of electrons on a sample. The electrons interact with the object to generate an image onto a connected computer screen. The image unveils information about the sample’s morphology and chemical composition. This information can be used to determine the composition of rocks or sediment or identify the species of an animal.