“LA JOLLA — The sardine resource off California has surpassed a million tons and is now considered fully recovered for the first time since the heyday of Cannery Row in the mid-1940s, Department of Fish and Game (DFG) fishery assessment biologists said. The announcement came at a recent meeting with Pacific sardine industry representatives in Monterey.”

Over 90% of world fisheries are found in coastal waters less than 200 km (124 mi) from shore. Many fisheries are associated with vigorous coastal upwelling. Upwelling is the process by which deep, cold, nutrient-laden water is brought to the surface, often by winds pushing water away from a coast. Along the west coasts of North and South America, upwelling provides the nutrients needed to sustain large populations of microscopic algae (i.e., phytoplankton). Phytoplankton sustain larger marine organisms all the way up the “food web,” including fish and marine mammals. Disruption of coastal upwelling can have devastating effects on fisheries: one example is El Niño. 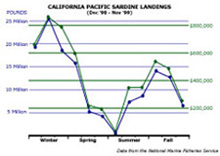 Using seasonal data on California’s Pacific Sardine landings from the National Marine Fisheries Service, your goal is to discover whether high Pacific Sardine landings are correlated with strong upwelling in Monterey Bay. Investigate atmospheric, oceanographic, and biological data to discover which season(s) had strong upwelling during that period of time. You will use actual data from in-water moorings in addition to other data from land-band instruments, earth-orbiting satellites, and computer models.