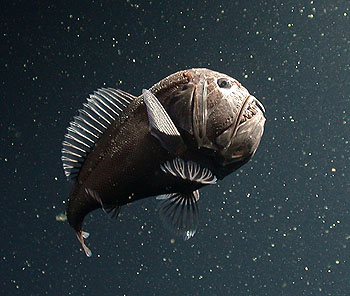 Deep pelagic animals such as this fangtooth have body shapes and lifestyles that are uniquely adapted to life in the deep sea. Image: © 2008 MBARI

When most people think about the deep sea, they picture broad expanses of muddy seafloor. However, the majority of deep-sea animals, and perhaps the majority of all animals on Earth, live in the “deep pelagic zone”–the dark waters between the ocean surface and the seafloor. An important research paper by MBARI marine biologist Bruce Robison points out that this seemingly remote habitat is increasingly being affected by human activities. Robison’s paper highlights the urgent need to understand and protect the diversity of animals in this unique and vital habitat.

The “deep pelagic zone” extends from about one hundred meters (330 feet) below the ocean surface to just above the deep seafloor. Because it is four to ten kilometers (2.5 to 6 miles) deep and covers perhaps two thirds of the Earth’s surface, this zone forms the largest single habitat for life on Earth. Robison suggests that the immense volume of this three-dimensional habitat contains more different species and more individual organisms than any other environment on the planet.

After decades of studying deep-sea animals, Robison says, “For most people these animals are out of sight and out of mind. They are also out of reach to all but a few scientists equipped with the latest technology. As a consequence, we know far too little about them. Because these animals are adapted to life in deep water, many are strange looking, even bizarre, but they are also wonderful examples of natural diversity. The bottom line is that the inhabitants of this environment constitute both the largest and least known animal communities on Earth.” 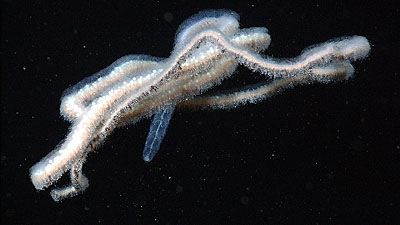 Animals such as this siphonophore are important predators in midwater food webs, but are still poorly understood. Image: © 2008 MBARI

Robison continues, “A million or more undescribed species, with biological adaptations and ecological mechanisms not yet imagined, may live within the vast volume of the deep-sea water column… The animals in this huge habitat make up essential links in the oceanic food web. They also provide food for important commercial species like tuna and salmon, as well as for whales, turtles, and giant squid.”

Because deep-sea animals are seldom seen, it’s easy to think of them as being relatively immune to effects of human activities. However, Robison argues that ongoing processes such as overfishing, ocean acidification, and expanding low-oxygen zones in the ocean could eventually wipe out key organisms and cause irreversible changes in deep-sea food webs. Such shifts in deep-sea animal communities might be invisible at the surface, but could directly impact marine mammals, human fisheries, or even the Earth’s climate. Robison says, “Given the changes occurring in the upper layers of the ocean, there can be little doubt that substantive changes must be taking place in deeper waters as well.”

According to Robison’s paper, “The principal concern here should be the prospect of undetected mass extinctions, which threaten losses in ecosystem function, economic opportunity, and vital ecosystem services.” Less dramatically, some deep-water species may flourish, while others become less common. For example, Robison suggests that animals that reproduce quickly, such as jellies and squids, may end up replacing animals such as deep-sea fish, which mature late and bear fewer young.

However, in order to figure out if deep-sea species are changing, researchers must have some idea of what’s already down there. This is why Robison stresses the need to document the existing biodiversity in deep-sea communities. 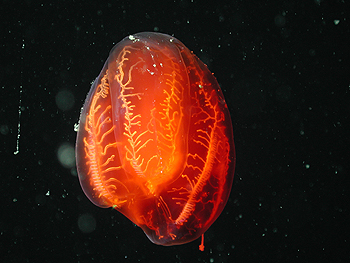 This orange ctenophore has been observed with MBARI’s remotely operated vehicles, but, like many such animals, has yet to be formally described. Image: © 2002 MBARI

As Robison put it, “These animals probably outnumber all others on Earth, but they are so little known that their biodiversity has yet to be even estimated.” Thus, changes in the numbers of and diversity of deep sea animals may already be occurring without our knowledge. Robison adds, “We can’t be good stewards to these communities if we don’t know who the animals are. The main problem is that we don’t have baseline data. Without baseline information on the animals that currently make up these communities, we can’t measure natural changes or those caused by human activity.”

From a scientific perspective, a diverse ecosystem is usually a healthy ecosystem. As Robison writes in his paper, “Biological diversity promotes ecological stability. Protecting the stability of the ecosystem that provides a major portion of the world’s food supply is obviously in our best interest.”

Robison goes on to say, “Although the deep sea has begun to receive the attention of conservationists, their efforts to date have focused chiefly on the deep seafloor.” He emphasizes that one of the main barriers to conservation of deep pelagic animals is lack of knowledge. “Despite the global significance of the deep pelagic fauna and the obvious benefits of protecting its biodiversity, the basic information necessary to do so is still lacking.” 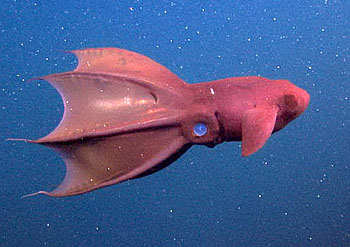 Vampyroteuthis is a deep-sea relative of octopus and squids that lives at depths where there is very little oxygen. Image: © 2005 MBARI

Robison argues that humans have no time to waste in collecting baseline information about deep-sea biodiversity. He also recommends setting aside protected areas in the deep sea even though our information about deep-sea biodiversity remains incomplete. “We should begin including the deep pelagic communities when we establish protected areas at the sea surface or on the seafloor… Common sense tells us that the oceans should be protected and that protection should include the conservation of deep pelagic biodiversity.”