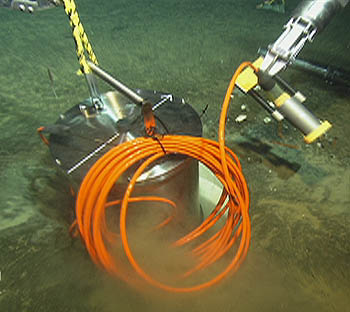 This image taken by ROV Ventana shows the MOBB seismometer being lowered into a plastic sleeve in the seafloor, about 1,000 meters below the surface of Monterey Bay. The seismometer was buried in the seafloor to shield it from the tiny vibrations caused by ocean-bottom currents and waves at the ocean surface. Image: (c) 2002 MBARI

A recent analysis of earthquake waves from last December’s Sumatra earthquake showed that MBARI’s sea-bottom seismometer in Monterey Bay can provide earthquake records as clear as those from the best land-based stations.

In April 2002, MBARI engineers worked with seismologists from the University of California, Berkeley, to install an extremely sensitive seismometer in the deep sea floor, 40 kilometers off Moss Landing. This instrument (known as the MOBB or Monterey Ocean Bottom Broadband seismometer) is so sensitive that it can record the vibrations created by ocean-bottom currents, ocean-surface waves, and faint echoes of earthquake waves within the ocean and seafloor. Such background “noise” must be filtered out of the seismometer’s signal using complicated computer programs.

According to MBARI electrical engineer Paul McGill, “When we first proposed this project, a lot of people said that you couldn’t put a broadband seismometer in a nearshore environment because there’s just too much noise.” For this reason, extra precautions were taken to make sure that that MOBB seismometer would be isolated from surface vibrations. The instrument was mounted in a specially designed case that was nestled in a cushion bed of glass beads and buried beneath the sea floor where it would not be jiggled by seafloor currents. The seismometer’s batteries and recording equipment were placed in a separate container about 10 meters from the seismometer, along with a current meter that helps scientists calibrate the seismometer readings to take into account any vibrations caused by bottom currents.

Data from the December quake is just becoming available this summer because currently the only way to get data from the MOBB seismometer is to use a remotely operated vehicle (ROV) to dive down to the seismometer, a thousand meters below the sea surface. Once the ROV reaches the seismometer, it swaps out a replaceable instrument pack that includes hard drives for recording data and batteries for powering the instruments. This data-retrieval process takes place about once every three months. After the data is retrieved, it must be processed and filtered, which can take several more months.

The recently processed data from the Sumatra quake indicate that the MOBB seismometer can provide seismic records that are as good as those from the best land-based stations. As shown in the seismograph below, the filtered MOBB records of the Sumatra quake almost exactly match the signals from an extremely sensitive land-based seismometer at a relatively quiet location, on the top of Mount Hamilton, east of San Jose, California. 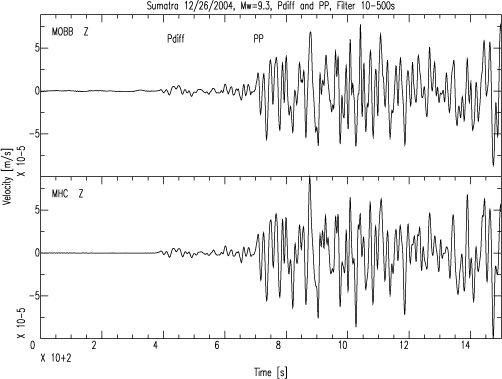 These two graphs show the main shock from the giant Sumatra earthquake as it appeared on seismographs from Monterey Bay (top) and Mount Hamilton (bottom). The fact that these two graphs are so similar shows that MBARI engineers and Berkeley scientists have been able to eliminate much of the background noise from the sea-bottom instrument. Image: (c) 2004 MBARI

Slight differences in the graphs may be of great interest to seismologists because the MOBB seismometer captured the earthquake vibrations before they traveled through the continental rocks of the North American plate. This may allow the MOBB instrument to capture details of the earthquake waves that are not visible at inland stations. Conversely, the differences between the sea-bottom and inland seismographs can provide geologists with information about the geological formations that lie between the two stations. This is particularly interesting because this region includes a number of highly active fault zones, including the San Andreas fault zone.

Several other interesting features are visible in the Sumatra seismographs. For example, in the graph below, you can see two distinct pulses, which repeat several times. These are earthquake waves traveling all the way around the earth, causing the earth to “ring” like a bell. 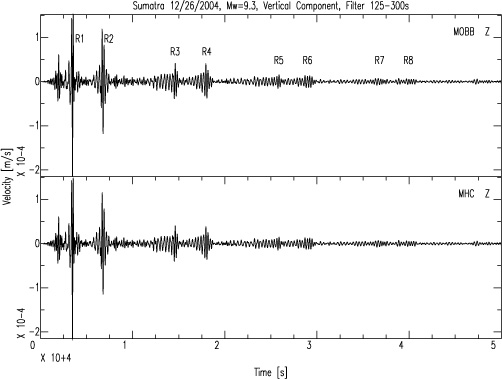 The MOBB seismometer represents the first step in extending California’s broadband earthquake monitoring network from land out onto the seafloor. Within the next year, geologists are looking forward to obtaining MOBB earthquake records in real time instead of having to send out a remotely operated vehicle to retrieve the data. This will be possible when the MOBB seismometer is hooked up to the Monterey Accelerated Research System (MARS) cabled observatory in Monterey Bay. Additional seismometers are planned for the extensive NEPTUNE observatory to be constructed off the Oregon and Washington coast over the next decade.