The Taney Seamounts are a series of extinct volcanoes that rise up from the seafloor about 300 kilometers west of San Francisco. This sonar image was created during MBARI’s 1998 seamount-mapping project. Image (c) 2000 MBARI

These days, when you can find your way through the woods using a cell phone or explore Mount Everest on your home computer, it’s hard to imagine that as many as 100,000 mountains on Earth have never been seen by human eyes, let alone explored. For all intents and purposes, these mountains are invisible, because they lie thousands of meters beneath the ocean waves. Many of these “seamounts” are active or extinct volcanoes. Some harbor amazing collections of wildlife, including deep-sea corals and dense swarms of fish. A new, special edition of Oceanography magazine summarizes fascinating new research on seamounts, and includes several articles authored or coauthored by MBARI scientists.

This comprehensive, peer-reviewed publication includes 14 semi-technical articles on seamounts in general, as well as 12 shorter articles that highlight specific seamounts around the globe. Other short articles describe cutting-edge scientific techniques for mapping, cataloging, and studying these sometimes enigmatic undersea features.

According to the editors of the magazine, “This issue of Oceanography offers a broad perspective on seamount research of all major disciplines to raise awareness of the diversity of seamount research and to promote collaboration among seamount scientists.”

The special issue opens with an introduction by Marcia McNutt, former president and CEO of MBARI and now director of the U.S. Geological Survey. She describes how seamounts were initially studied by the U.S. Navy as hazards to submarine navigation, but are now appreciated for their significant effects on ocean currents, ocean chemistry, microbial communities, marine biodiversity, and even fisheries. Seamounts are also of great interest to marine geologists, geochemists, and geophysicists, as well as to economic geologists searching for sources of rare metals on the seafloor. 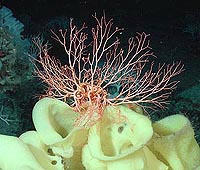 MBARI geologist David Clague coauthored one of the summary articles, titled “The Geological History of Deep-Sea Volcanoes.” In this article, he and coauthor Hubert Staudigel of the Scripps Institution of Oceanography expand the definition of seamounts to include volcanic islands such as Hawaii, which stick up above the ocean surface. As they point out, “Many oceanic islands start out as seamounts and turn back into seamounts toward the ends of their life cycles.” Clague also coauthored articles on Axial Seamount and Loihi Seamount.

Other MBARI authors include Lonny Lundsten, Jenny Paduan, and Alicé Davis, who (along with David Clague and James Hein) coauthored an article on Davidson Seamount. In addition, MBARI adjunct Geoffrey Wheat, a professor at the University of Alaska, Fairbanks, coauthored articles on South Chamorro Seamount and on seamount contributions to heat and fluid flow from the seafloor.