MOSS LANDING, California—Computer networks and power grids are common enough on land, but over the next three years a team of oceanographers will be extending such networks thousands of feet beneath the sea. The Monterey Bay Aquarium Research Institute (MBARI), along with the University of Washington, Jet Propulsion Laboratory, and the Woods Hole Oceanographic Institution, recently received a $7 million grant from the National Science Foundation to set up an undersea data network for oceanographic research in Monterey Bay. This network, the Monterey accelerated research system (MARS), will consist of undersea cables and docking stations providing power and high-speed data links for a variety of oceanographic devices.

Marcia McNutt, President and CEO of MBARI, notes, “We take for granted the fact that the infrastructure for power and communications is readily available on land. But for decades researchers have struggled with the problem that there is no undersea equivalent to the wall socket, the phone line, or the internet drop. MARS will provide the first state-of-the-art power and communications ‘highway’ into the deep sea.” 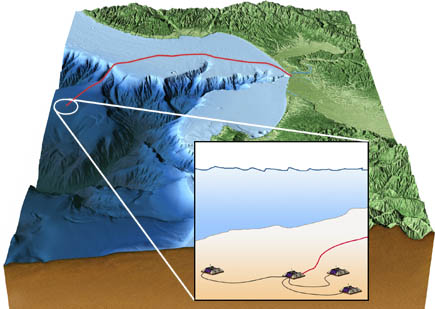 View of Monterey Bay and Monterey Canyon, showing one possible route for the MARS cable. Inset shows benthic instrument nodes attached to the end of the cable.

By supplying both data links and electrical power, this network will allow real-time, continuous, and long-term monitoring of conditions beneath the surface of the bay. Currently such information can only be gathered during intermittent ship cruises or using temporary devices that must eventually be retrieved when their batteries wear out. When complete, the MARS network will be able to support a variety of “plug-and-play” research devices, and will be expandable, with additional devices on side cables up to 100 km from the main cable.

The first stage of the network will consist of 62 km (39.5 miles) of submarine cable and a single science node located 1,200 meters (almost 4,000 feet) below the ocean surface. The node will have four separate ports (docking stations) for oceanographic instruments. Each port will support bi-directional data transfers of up to 100 Mbits per second—comparable with some of the fastest land-based commercial data networks. The cable will also supply up to 10 kilowatts of power to the instruments-enough power to supply a small neighborhood, and several orders of magnitude more power than could be supplied using batteries alone. 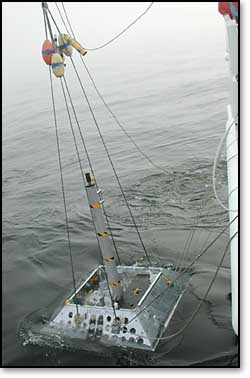 A remote instrument node (RIN) being lowered into Monterey Bay from the transom of the R/V Western Flyer. This RIN contains a variety of instruments for measuring water temperature, conductivity, and density, currents, sediment load, and chlorophyll concentrations. Currently, the batteries for these instruments must be replace every three months. Eventually we hope to hook up these instruments to the MARS network for long-term sea-floor monitoring. Photo: C. Paull (c) 2002 MBARI

Within the MARS team, Woods Hole Oceanographic Institution is developing the communications and command/control systems. The University of Washington and Jet Propulsion Laboratory are working on the power supply system. The Dominion Astrophysical Observatory in Canada will be designing the data management and archiving system. Much of this work has been underway for several years at the various institutions. A private company, L-3 MariPro, will be overseeing the actual construction and installation the network.

MBARI will provide the shore base for the network, and will be involved in project management and engineering, including the permitting and environmental review process. This last element is critical to make sure the cable does not damage fragile marine ecosystems within the Monterey Bay National Marine Sanctuary. In fact, MBARI has been working with the Sanctuary governing board and other agencies since 2001 to make sure that all environmental concerns are addressed from the outset. MBARI will also team up with the Monterey Bay Aquarium to make scientific results from the MARS project available to students and the general public.

In addition to supporting oceanographic research within the Monterey Bay, MARS will serve as a testing ground for technologies to be used in more ambitious undersea networks, such as the Neptune project. Neptune will involve thousands of kilometers of undersea cables and dozens of networked seismographs and oceanographic monitoring stations off the Pacific coast, from Northern California to Vancouver Island. This dynamic undersea region, where oceanic and continental plates collide, is a key to understanding global tectonic processes, as well as assessing the risks from locally generated earthquakes and tsunamis.

MBARI has been working on moored and mobile oceanographic sensors for many years, most recently through the MBARI ocean observatory system (MOOS) program. MOOS scientists and engineers have been developing the hardware and software necessary to install, operate, and service moored oceanographic instruments on the seabed and in the water column. They are also working on data-transfer protocols and on systems that would allow autonomous underwater vehicles to dock with the MARS moorings for maintenance and data transfer.

In assessing the importance of the MARS project, MBARI’s Director of Engineering, Jim Bellingham, reflects, “As a nation, we have invested heavily in remote sensing technologies to study the surface of the ocean, and have benefited greatly. MARS is the forerunner of a new class of observational systems that for the first time extend our presence into the ocean’s interior in a permanent and meaningful way. In a very real sense, we are ushering in a new era of exploration of the world’s oceans.” 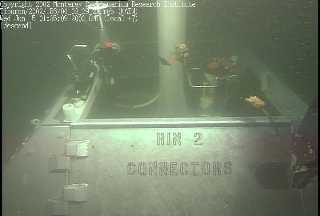 This underwater photograph (captured from video) shows a remote instrument node (RIN) on the sea bed in Monterey canyon. This RIN contains a variety of instruments for measuring water temperature, conductivity, and density, currents, sediment load, and chlorophyll concentrations. Currently, the batteries for these instruments must be replace every three months. Eventually we hope to hook up these instruments to the MARS network for long-term sea-floor monitoring. Photo: (c) 2002 MBARI 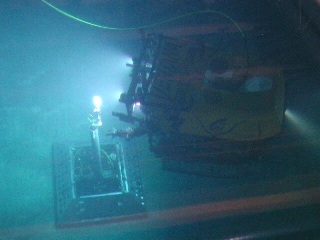 This photograph shows a remote instrument node (RIN) in the MBARI test tank, along with MBARI’s remotely operated vehicle (ROV) Ventana. We are testing the ROV’s ability to set up instruments on the RIN before installing the RIN on the sea bed. Photo: Todd Walsh (c) 2002 MBARI