Tracking drifting algal blooms and the nutrients that keep them going 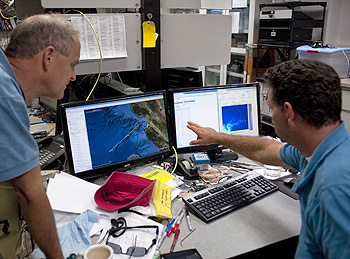 This month MBARI researchers are conducting a two-week-long, in-depth oceanographic experiment to track the nutrients that fertilize algal blooms off the coast of Central California. This research is part of MBARI’s ongoing CANON (Controlled, Agile, and Novel Observing Network) initiative, a project utilizing the latest research technologies to observe the dynamic biological, chemical, and physical activities of the ocean. In the current CANON experiment, scientists will be examining how ammonium—a key nutrient for microscopic marine algae—affects what researchers call the ocean’s “biological pump.”

The “biological pump” is a complex series of interdependent processes that transport carbon from the ocean’s surface to its depths. During photosynthesis, microscopic algae absorb carbon in the form of carbon dioxide (CO2) gas and convert it into carbon in the form of living tissue. When the algae die, or get consumed and excreted, some of the carbon from their tissues sinks down as tiny particles into the depths below.

Without the biological pump, human-induced climate change would be much worse than it already is. The biological pump helps the oceans store about two billion of the seven billion tons of carbon that humans release into the atmosphere each year. Although these billions of tons of carbon are removed from the atmosphere, they are making the ocean more acidic, which could disrupt ocean ecosystems. In order to predict how the oceans will respond to increasing CO2 levels and climate change, oceanographers need a better understanding of how marine food webs, nutrient cycles, and the biological pump respond to changes in the ocean environment. 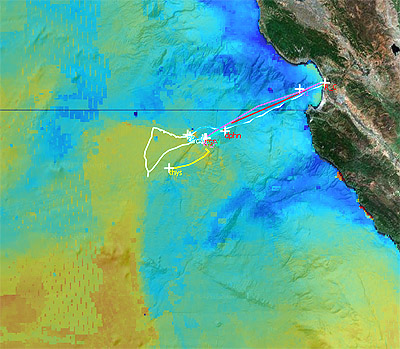 This illustration of the Central California coast shows the positions of a few of the ships, autonomous vehicles, and drifting instruments in the CANON experiment. The color of the ocean areas indicates the water temperatures at the ocean surface. The blue areas represent cold, nutrient-rich water that has risen to the surface near the coast and is being carried offshore. The yellow areas at lower left represent relatively warm water from the California Current that is flowing toward shore. This image is from MBARI’s Oceanographic Decision Support System (ODSS), which allows researchers on shore to follow the experiment in real time. Image: 2012 MBARI

Although oceanographers understand in general how the biological pump works, many fundamental details remain unclear. One such detail is the role of nutrients such as ammonium. Ammonium is a key nutrient for the microscopic algae (phytoplankton) that use sunlight and nutrients to produce the food that supports almost all other marine organisms. The current CANON experiment will investigate elevated concentrations of ammonium that were observed during the 2010 CANON experiment in the California Current, about 160 kilometers (100 miles) offshore and 50 meters (165 feet) below the surface. MBARI researchers hope to better understand how this subsurface layer of ammonium forms and persists, and how it sustains or constrains the organisms in and above it.

One of the first challenges for the CANON researchers was to find the most appropriate spot to conduct their experiments. Off the west coast of the U.S., relatively warm, low-nutrient, surface waters flow southward in the California Current. As it flows south, this water mixes with cold, nutrient-rich water that rises up from the depths along the coast and is transported offshore in filaments and eddies. This creates a complex, ever-changing mixing zone that makes it difficult to identify and track water masses and algal blooms.

The CANON group employed an array of technologies in selecting their test site. First, the researchers looked at the big picture, analyzing satellite images of sea-surface temperatures, sea-level anomalies (which show the locations of filaments and eddies), and chlorophyll (an indicator of algal blooms).

Next they sent autonomous vehicles, including an underwater Spray glider and a surface vehicle called a Wave Glider, out to sea to provide more detailed data on temperature, chlorophyll, salinity, and carbon dioxide and oxygen levels. Based on all of these data, the researchers decided to conduct their experiment about 80 kilometers (50 miles) offshore of Moss Landing, along the eastern edge of the California Current. 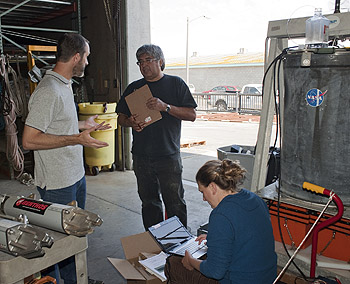 Finding the best study site was only the first technical challenge researchers had to overcome to study the biological pump. Plankton (whose name derives from the Greek word for drifting) float freely with the ocean currents. Studying these itinerant organisms for any length of time requires using instruments that can also drift along with the currents.

The most important drifting instrument in the CANON experiment is a robotic DNA lab—the Environmental Sample Processor (ESP)—that can collect and identify plankton in real time. The ESP research is supported by grants from the National Science Foundation, through the Center for Microbial Oceanography: Research and Education (C-MORE), from NASA’s ASTEP program, and from the Gordon and Betty Moore Foundation.

Accompanying the ESP as it drifts in the California Current System will be three autonomous underwater vehicles (AUVs). MBARI’s long-range AUVs, Daphne and Tethys, will work in tandem, orbiting the ESP and recording properties of the surrounding water such as temperature, chlorophyll, and oxygen and nitrogen concentrations. The data collected by Daphne and Tethys will help researchers determine whether the ESP is drifting along with a single plankton bloom or passing through different communities of plankton.

In addition to taking measurements along the ESP’s drift path along with Daphne and Tethys, MBARI’s upper-water-column AUV, Dorado, will be deployed along with several oceanographic “drifters.” These drifters have a drogue hanging beneath them at a specified depth. The drogue acts like an underwater kite, causing the drifters to follow subsurface currents at the depth at which the drogue is set. In this case, the drogues are 10 meters below the surface—the same depth at which the ESP is deployed. Thus, the drifters should follow the same water mass that is being sampled by the ESP. By tracking the drifters using GPS, CANON researchers can get an idea of where this water mass is going. 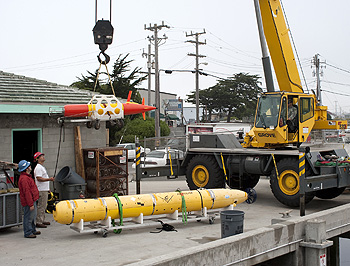 MBARI researchers hope that by studying ammonium concentrations and plankton populations within a single, moving water mass, they will see how nutrient concentrations affect plankton populations within the water mass, and vice versa. They will combine these data with measurements of carbon dioxide and ocean chemistry to get a dynamic, three-dimensional picture of the biological pump in this part of the California Current. Findings from this region will also provide insights into how the biological pump works in other upwelling areas.

Researchers are concerned that the biological pump could be affected by human-induced changes in the temperature and chemistry of the oceans. For example, if the biological pump becomes less efficient at removing carbon from the atmosphere, this could cause global warming to accelerate. Any changes in the biological pump could resonate from the ocean’s surface to the deep seafloor, affecting all aspects of ocean life, and ultimately the Earth’s climate. By providing more information on this important process, the CANON experiment will help us better understand how the oceans work, and how they could change over the next few decades or even centuries.