The undescribed species in our backyard 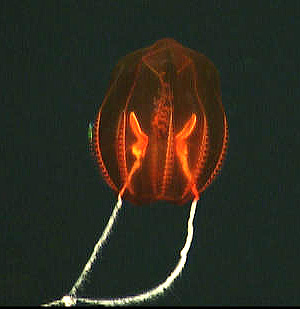 When MBARI marine biologist Steve Haddock returned from his last research cruise, he was exhausted but exhilarated. He and a team of marine biologists had been working 18-hour days, taking advantage of precious ship time on MBARI’s research vessel Western Flyer. They had spent a week at sea, observing marine animals almost non-stop using the remotely operated vehicle (ROV) Tiburon. But the team’s effort had paid off—they had documented what Haddock called “a fantastic assemblage of weird and undescribed plankton” and had collected at least 22 different species of unclassified animals.

“Every time we dive below 2,000 meters, we see species that are new to science,” Haddock explained. “People talk about the importance of biodiversity, but you don’t have to go to some exotic rainforest to find new species. In fact, you don’t even have to go very far from shore.” After thinking a minute, he added, “It’s amazing to me how little we know about the animals in our own back yard. Many of these animals are actually quite abundant, but very few experts get to see them.”

One of the goals of Haddock’s recent cruise was to give expert marine biologists the chance to see some of these obscure animals and to discuss how to classify them. To this end, he brought along a group of world-class experts on a variety of midwater animals, including siphonophores, ctenophores, radiolaria, chaetognaths, worms, and squids. In many cases the experts were very excited to see these deep-sea animals intact for the first time, having previously worked only with preserved specimens or photographs. 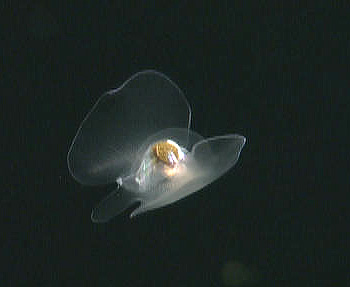 Pteropods, or sea butterflies, are distant relatives of garden snails. Some even have shells inside their bodies. Although scientists have classified some pteropods using their shells, the live animals are very fragile and difficult to study. High-definition video cameras such as those on ROV Tiburon allow scientists to study these animals alive and in their native habitat. Image: (c) 2006 MBARI

During their week at sea, the researchers spent 10 hours a day observing animals with ROV Tiburon’s high-definition video camera. Occasionally they used the ROV’s “detritus samplers” to collect individual animals for closer study. Some marine biologists donned wetsuits and SCUBA gear to observe gelatinous animals that live near the sea surface. At night they dragged nets through the deep water to count populations of hard-shelled animals such as amphipods and isopods (which are related to beach hoppers and pill bugs on land). After all this collecting, Haddock and others typically stayed up until two or three in the morning, examining and preserving the animals they had found. 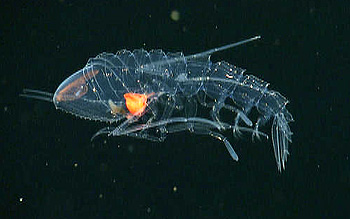 Some relatively sturdy animals, such as this amphipod in the genus Cystisoma, can be collected using traditional oceanographic tools such as plankton nets. However, before the advent of ROVs and blue-water diving, marine biologists had no idea that several related amphipods live primarily within the bodies of larger, gelatinous animals. Image: (c) 2006 MBARI

A surprisingly large proportion of gelatinous marine animals have yet to be named or classified because they disintegrate when collected using traditional oceanographic tools such as plankton nets. Even using modern technology, some of these organisms are almost impossible to preserve for study on shore. As Haddock put it, “When you try to preserve a deep-sea ctenophore, you usually end up with a little white film on the bottom of the jar.” 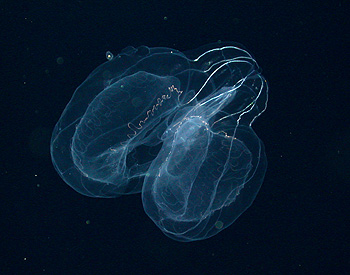 How do you classify an animal that has no color and no fixed shape and turns into a little puddle of slime when you try to preserve it for study on shore? Image: (c) 2006 MBARI

By freezing these fragile animals, the scientists can transport enough tissue back to shore so that they can do DNA analysis. But categorizing a new animal requires more than just DNA. For example, scientists have performed DNA analysis on more than 50 different types of deep-sea ctenophores, but less than half of these have been given scientific names.

Although DNA analysis can show how an animal is related to other species, this information alone is not usually enough to give the animal a name. A biologist must also be able to describe the physical appearance of the animal—how many spines it has or the shapes of its internal organs—and to highlight those physical features that differentiate it from other animals.

This is where MBARI’s high-resolution video comes in handy, especially when complemented by the skill of the ROV pilots. As Haddock notes, “Those guys can keep the ROV [which is about the size and three times the weight of a VW bus] steady enough to let us zoom in on animals that are only a couple of millimeters across. There’s no way we could do this research without them.”

Video observations also provide important information about the animal’s habitat and ecological niche. As Haddock is quick to point out, naming an animal is only a beginning. “What I’m really interested in is what these animals tell us about evolution and species diversification within the ocean. It’s not just a matter of checking them off the list. You also want to know how they live and what they eat.” Nonetheless, he admits that, “Eventually it would be nice to name some of these animals, so that we don’t have to keep calling them ‘the green siphonophore’ or ‘the blue siphonophore’.” 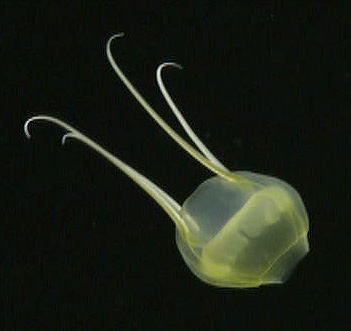 Even relatively well known animals, such as this jelly in the genus Aegina, sometimes surprise scientists by evolving unusual forms or colors in deep water. Image: (c) 2006 MBARI

Sometimes, when trying to classify an organism that is totally unique, a biologist may have to create a new family for that animal—a new branch on the tree of life, as it were. Few scientists are willing to break new ground like this without long and careful analysis. If later studies prove the classification to be incorrect, the scientist may lose credibility and any years of research findings based on the previous classification may have to be re-evaluated. 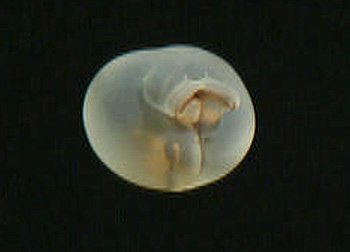 Some midwater animals, such as this deep-sea Chaetopterid worm, are so unusual that at first glance it is impossible to tell what group they belong to.
Image: (c) 2006 MBARI

Scientific collaboration is often a vital part of the classification process. This is especially true for some obscure groups of animals, whose family trees are well known only to one or two experts in the entire world. As Haddock put it, “Some of these people are almost ready to retire, but they have so much background knowledge… and the best way to share this knowledge is through the first-hand discussions like those we had on board the ship.” 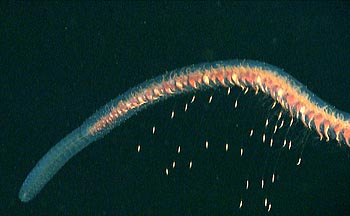 Siphonophores such as this one in the genus Stephanomia are often classified based on differences in tiny body parts that are easily damaged or dislodged during the collection process. The white flecks on this image are attached to fine tentacles that the siphonophore uses to capture prey. Image: (c) 2006 MBARI

The process of classifying an animal can have implications far beyond the esoteric world of phylogeny (the naming and classification of organisms). For example, it’s one thing to give a name to a new deep-water jelly. It’s quite another to discover that this jelly is so common that it is a top predator in some oceanic food webs.

Similarly, marine biologists have been struggling for decades to understand the biodiversity of open-ocean ecosystems. However, because biodiversity depends on the number and variety of species in an ecosystem, scientists must be able to identify all the important species in an ecosystem before they can measure its biodiversity. On an even larger scale, by estimating how much organic carbon is contained in various groups of organisms, Haddock and other scientists hope to understand how living material is recycled within the oceans.

Reflecting on his years of studying animals in and around Monterey Bay, Haddock comments, “Some of these undescribed species are surprisingly abundant and ecologically important. For example, there’s this one species of undescribed siphonophore we’ve seen a lot recently. We call it “R-200″ because it’s always about 200 meters below the surface. Now that we know it is a unique species, we’re wondering why we didn’t see it before. Perhaps it was there all along, and was simply misclassified. On the other hand, it might have moved into the area just recently, and could be an indicator of large-scale changes in ocean currents. The bottom line is, we can’t detect signs of change in the ocean, the Earth’s largest ecosystem, without knowing who lives there.”

December 10, 2020 – At least nine major groups of deep-sea animals, including jellies, corals, brittle stars, squids, and fish, use the same light-emitting chemical, coelenterazine, to power their displays.
July 3, 2019 – Researchers are developing computer models to learn how comb jellies evolved to live at different depths in the ocean.
Apr 9, 2018 – Marine biologist Steven Haddock and his team have embarked on an ambitious project to understand the evolutionary history of ctenophores.