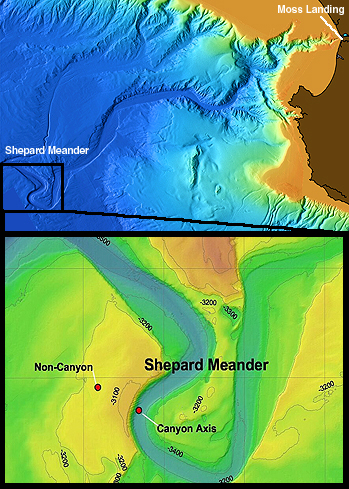 The top image shows a computer-generated map of Monterey Canyon showing Moss Landing in the upper right corner and the Shepard Meander at lower left. The bottom image shows a close-up view of the Shepard Meander. The main instrument node for measuring down-canyon carbon movement is located at the red dot labeled “Canyon Axis.” The sediment traps for measuring carbon sinking from above are located near the red dot labeled “Non-canyon.” Images (c) 2004 MBARI

One hundred kilometers from shore and 3,500 meters below the ocean surface, the channel of Monterey Canyon approaches the abyssal plain—the true floor of the deep sea. Within a large bend in the canyon known as the Shepard Meander, MBARI scientists recently installed a cluster of instruments that they hope will shed light on an oceanographic mystery—a case of missing carbon.

It has long been assumed that the primary source of food (carbon) for animals in deep-sea sediments is the slow rain of marine snow from sunlit surface waters. But field studies on the continental margin have shown that marine snow can not account for all of the organic carbon that these animals consume. One logical source for this “missing carbon” is organic matter that moves from coastal waters, across the continental shelf, and down the continental slope. Submarine channels and canyons such as Monterey Canyon may serve as conduits for such material. But scientists have yet to measure how much carbon makes its way down submarine canyons and into the deep sea.

Over the past six years, MBARI’s remotely operated vehicle (ROV) Tiburon has made many dives into the deep recesses of Monterey Canyon. But these brief trips can provide limited information on long-term geological and biological processes. This is why, in late June 2004, a team of MBARI scientists and engineers installed a sea-bottom observing system 3,500 meters down, in the Shepard Meander. Over the next year, this array of scientific instruments will help scientists compare the amount of organic carbon coming down Monterey Canyon with the amount of carbon sinking down from surface waters.

This sounds simple in principle, but the challenges were many. First, the researchers had to make sure that their delicate instruments would be able to collect data for six to twelve months in the crushing pressure and frigid cold of the deep ocean. Second, they had to consider whether the instruments might be threatened by violent currents that have destroyed and buried equipment in the upper reaches of Monterey Canyon. Third, they had to figure out ways to measure the movement of carbon in many different forms, from microscopic clay particles and organic debris to decomposing strands of kelp.

The task of measuring these down-canyon flows was spearheaded by MBARI geologist Charles Paull. To this end he and other MBARI researchers deployed several groups of instruments within the main axis of the Shepard Meander, in essence creating a small underwater observatory. One group of instruments is supported on a heavy steel stand called a “remote instrument node” (RIN), as shown in the photograph at left. All of the instruments are attached to the top of the RIN in a single unit that can easily be deployed or replaced if necessary. Although the MBARI researchers believe that extreme current events are not common in the lower part of Monterey Canyon, this RIN design reduces the likelihood that their instruments will be buried if such an event does occur. Over the next six months, these instruments will measure water temperature, salinity, and clarity (transmissivity), as well as phytoplankton (chlorophyll) concentrations, and currents within 300 meters of the seafloor.

Several other groups of instruments have been deployed in the canyon near the RIN. A two-meter-high, funnel-shaped “sediment trap” floats 10 meters off the bottom, collecting both carbon that sinks down from above and carbon that is suspended on the canyon currents. Anchored nearby is a vertical profiler, which automatically moves up and down a 500-meter vertical cable, measuring water temperature, salinity, and currents as it goes. These instruments will help the scientists understand changes in the thickness of the “benthic boundary layer”—a layer of turbid water that lies within a few hundred meters of the canyon floor. 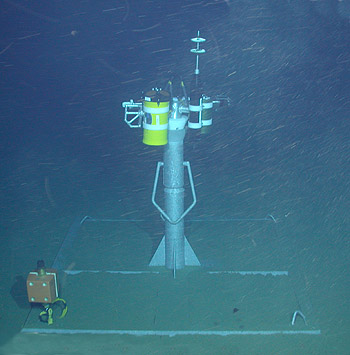 One of Paull’s research goals is to compare carbon transport under ambient conditions in the benthic boundary layer with the amount of carbon transported down-canyon during extreme events such as turbidity flows. To address this question, he will be analyzing sediment cores taken within the canyon axis, in an effort to map and eventually date individual sediment flows.

While Charlie Paull and his group are measuring down-canyon carbon flows, MBARI biologist Jim Barry is working on the other half of the carbon equation, trying to find out how much organic material is sinking down directly from surface waters. In addition to setting up a sediment trap near the RIN, Barry and other MBARI biologists have deployed two additional sediment traps outside the main canyon axis, where down-canyon carbon flow is believed to be negligible. One trap, 10 meters above the seafloor, will collect data that can be compared with data from the 10-meter trap in the canyon axis next to the RIN. The second trap, suspended 300 meters above the seafloor, will indicate how much carbon is sinking into the benthic boundary layer from above. Both traps will help scientists understand how the flux of carbon from surface waters changes over time (for example, in response to changes in plant and animal populations in surface waters).

During this same eight-day expedition, MBARI biologists also deployed a set of “benthic respirometers.” These instruments measure the amount of oxygen used by animals in bottom sediments, as an indicator of how much carbon they are consuming. These data can provide clues on how bottom-dwelling animals respond to the different amounts of carbon available in different areas and at different times of year.

A final goal of this ambitious expedition was to lay more than a kilometer of fibre optic cable from the RIN in the canyon axis, up the side of the canyon, to the “non-canyon” study site outside of the main canyon axis. This was the first test of ROV Tiburon’s cable-laying sled on steep slopes. Eventually, such cable will be used to connect several deep-sea instrument nodes.

In October 2004, Paull and the other MBARI researchers plan to return to the Shepard Meander to retrieve their instruments, download the precious data they have collected, and redeploy the instruments with fresh batteries. The results from the first six months will provide an initial look at long-term changes in this deep environment. They will also help the scientists determine which instruments and data are will be most useful in solving the mystery of the missing carbon in continental margin sediments.

The Shepard Meander expedition and the Monterey Ocean Observing System

The Shepard Meander expedition is part of a larger MBARI project called the Monterey Ocean Observing System (MOOS). This is the third major ocean observing platform that MBARI has deployed under the MOOS program this year: In April, the MOOS test mooring was deployed in outer Monterey Bay to test methods for transferring electrical power and data between the ocean surface and the deep seafloor. In late May, the CIMT mooring was deployed in the inner bay, to study the effects of coastal upwelling processes.

The technology being tested in these three platforms will eventually be integrated to include instruments on the seafloor, in the water column, and at the surface, all of which will be networked and able to relay their data back to shore in real time. These instruments will also be able to run longer, without the need for battery changes, because they will receive electrical power from solar and wind generators at the sea surface, or from a sea-bottom cable to shore. If all goes well, MBARI hopes to have such a fully functional ocean observatory up and running within the next three or four years.